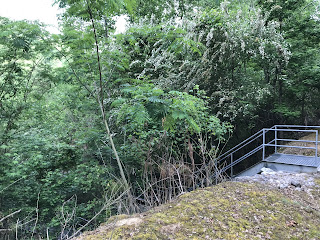 The metal stairs of access six was a welcome site Tuesday morning as I made my way down to the gorge to fish the Sipsey for the first time this year. Heavy rains have kept it high and out of its banks for most of the Spring. So to say I was ready to fish was an understatement. As I set foot on the wet slippery rocks at the bottom of the stairs I was met by a young couple from Birmingham fishing with spinning gear in a distance. There was one more individual fishing upstream. I couldn't believe I partially had the place to myself. I decided to start working in an area I hadn't fished since last fall which was near the dam at access 7.  As I made my way to the area I notice the trout were feeding sparingly on top, which I had seen before numerous times here. So the most logical fly for me to try was one I 'd fished many times before here and that was the size 20 "Gnat". When in doubt what dry fly to use on the Sipsey with no hatch try the Gant.

My first cast was made above one of the seams below access 7 that drops water into the larger deep mini pond, which I like to call it.  Here the water slows and lets the fly really get the attention where the trout were feeding. As the tiny Gnat broke free of the fast water and entered the slow water a trout nailed it on my first cast of the morning. Sorry to say I lost my first trout, either by poor hook set or not expecting a take that fast. Little did I know that this missed take would prove to be the best dry fly action I've ever experienced on the Sipsey. 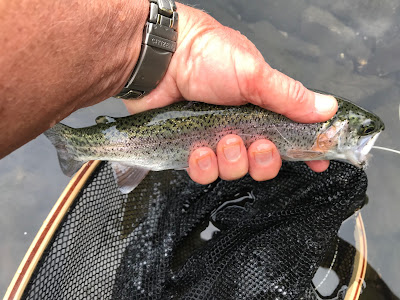 First trout of the morning using the tiny Gnat letting it do its magic. I am not a fan of fishing tiny flies. It's hard for me to see the fly on the surface. This morning I had no problem seeing it because the takes were so aggressive. 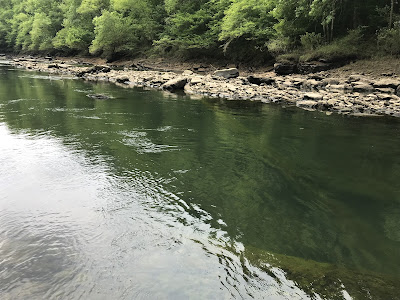 The water was crystal clear and ice-cold making it the perfect place for trout to survive in of all places near Jasper Alabama. This is the large pool area where most of the feeding was taking place below the seam. As I was landing numerous trout here one of the guys at the fly shop showed up and started fishing below me with a client. He had the guy fishing with a nymph. 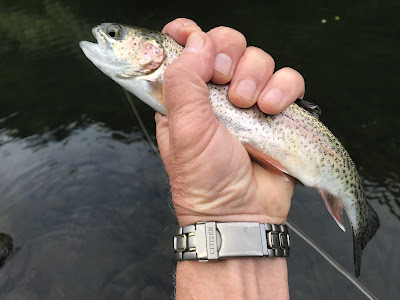 Another willing taker on the Gnat. I decided to change the sizes of my Gnat to a size 18 which increased my catch ratio, bigger fly wider gap hook. I was using my 4wt.  9 ft. Redington with my 3/4 wt. Gloomis free spool fly reel. I've written a post on this reel before, because of its ability to take up lose line at your feet extremely fast by spinning the face of the reel. This feature that this reel has is so useful when you're wanting to use the drag to play a big fish. I really didn't need this feature today because all the trout I landed was in the 11" to 12" range. 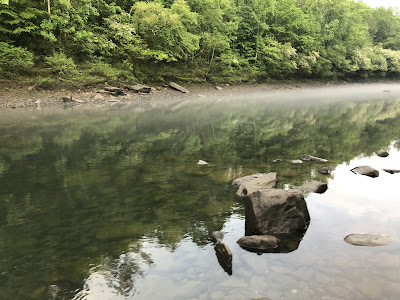 Extremely slow water here where the trout had slowed some in there feeding frenzy, but still taking the Gant. The difference now was the take was a sipping motion, which caused me to change tactics with the fly. I stop adding floatant to it and started letting the fly drift a little subsurface. Another fly I like to use when the trout are sipping is the Alans Soft Hackle. I completely forgot about other dry flies today because the action was so good on this one fly it blacked out all other patterns. 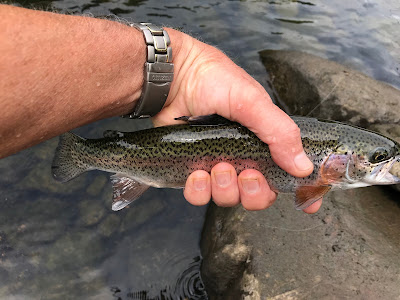 All good feeding sprees have to come to an end and around 10 AM it was over. The rest of the morning was spent fishing nymphs in around the huge logs near access five and the shaded area entering access five. I added to my total with some better trout in deeper water in the log jams. I don't like to talk numbers when I'm trout fishing, but today's trip had numbers pushing close to 20! Wonder if I will be back tomorrow?-------YES!!
Posted by Bill Trussell at Wednesday, May 06, 2020