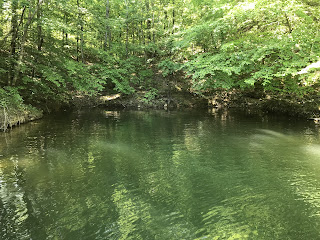 My first trip this year on Smith Lake fishing for early spawning bluegill was memorable. Our first moon of May was 10 days ago. Three days before and three days after a full moon is one the best times in early spring to fish for spawning bluegill. Of course, this will vary in different parts of the country. Not all big bluegill will be found on the first spawn and will wait until the second spawn in June. On Smith Lake, one can expect to land 3 to 5 big bluegills in one area nook in water 10 to 12 ft. deep. Fishing in this depth for bluegill using a popper requires one to let the fly set motionless for a short period of time before the big gill will try to kill it. I've never landed more than 5 in one spawning area on Smith. This was the case this past Thursday, where I fished over a dozen areas in the back of nooks on Ryan Creek to land the 8 big gills I brought home to dress for a meal. I landed a lot of small bluegill in the same areas which were released to fight another day. 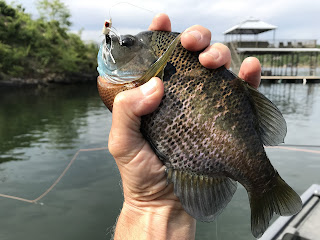 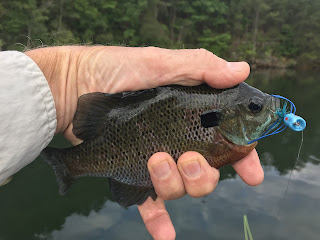 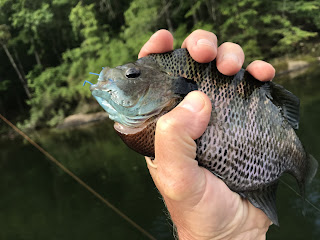 I used a couple of poppers today to get the attention of these nice gills. Early the blue Boogle Bug was the popper which got hits and on up in the morning the white Bar Nunn worked much better. Color does make a difference when fishing for the bluegill. I thought a number of times that had some of the spotted bass on when landing these bluegills. The fight was strong and lots of fun fishing with my 9 ft. 4 wt.
Posted by Bill Trussell at Tuesday, May 19, 2020