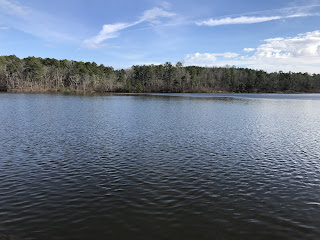 There's been one day in the last two weeks here in Jasper that was suitable enough to fish and that was last Monday. The rest of the time it has been raining with flooding. Ivan and I boarded my Pelican boat and fished Monday afternoon on beautiful Walker Lake. We wanted to see if the bluegill and red-eye bass had moved into the shallow water next to the banks. We spent a good three hours casting small poppers and nymphs in some areas we both had fished before. 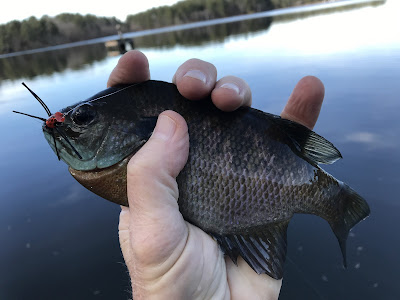 I had to change poppers quite a few times before I got this bluegill to sniff hit it. Sniff hit meaning an extremely light hit, making me believe that the fish was annoyed with popper. This fish and the other small ones we landed were at least 6 to 7 ft. away from the banks; in other words no bank action at all. 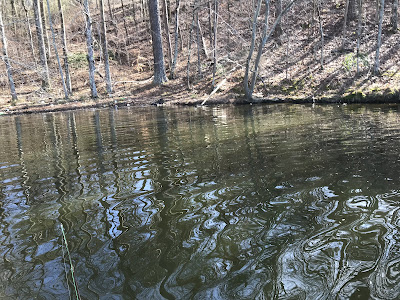 A slight breeze all afternoon kept the water surface laced with ripples. The only place we got any surface action at times was when found a smooth surface area.  Some small lakes take on a drab look in the winter months, but not Walker it retains its beauty throughout the year with large pine and oak trees lining its banks. 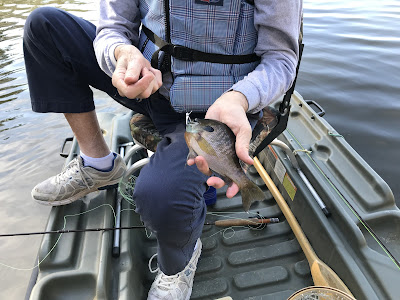 Ivan landed this bluegill using a small Betts white popper. He spent a good hour fishing various colored popper patterns before this fish hit. Letting the popper sit motionless for a short period produced the strike. I was surprised that no fish was landed using the nymph. I told Ivan before we launched the boat that landing fish would be secondary for me this afternoon because I was just glad to get on the water. 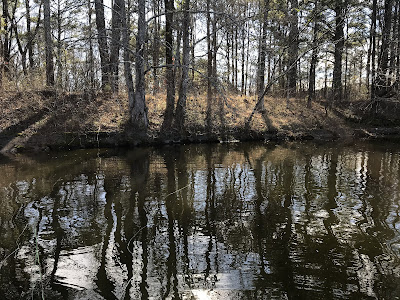 The levee was one area to avoid the wind. Poppers don't produce well when fishing choppy water surfaces. There was no red-eyed bass landed on this day. The red-eyed bass is native to the creek that feeds Walker Lake. The largest I've ever landed here was in the 12" size. 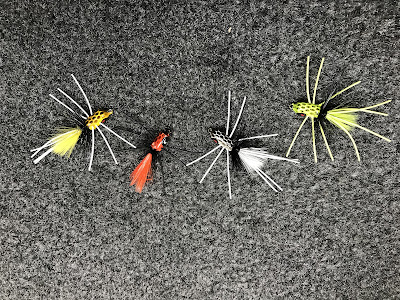 The size 10 Betts popper is one of my favorites when fishing for finicky fish. The white and red Betts poppers were the winners today that got the bluegill's attention. Color does make a difference when fishing for bluegill. Most fishermen will tell you that bluegill is stupid and will hit anything cast their way; not the case when fishing out of season for this fish. Catching this size bluegill on a 2 and 3 weight fly rod is a blast. All of the small nooks in this lake doesn't require one to fish with a long fly rod. A 7 1/2 foot fly rod is a great choice to cover the banks making a short cast.
As I get older I've come to realize that one doesn't have to land the largest and the most fish. Today's trip was a great example of that statement!!

Bill it's great you guy's had the opportunity to fish. And catch rates mean nothing.

The brookie has that same low respect as the bluegill. They to are considered by many as being not to swift. You don't believe that and neither do I.

Mark
Just glad to be on the water; the skunk would have been ok-----unbelievable amounts of rain we are getting here now!!!

Alan
Let me land a monster bluegill on a 3 wt. and I'm one happy fly fisherman!!! Thanks for the comment

Glad you had an opportunity to fish some poppers on a fine winter lake before the rains set in. Here in the north I'm just biding my time & waiting for the streams to open up, but thank you for the inspiration and for sharing your latest.

Walt
Tiny poppers produce well when the bite is slow for the bluegill, especially in the winter months. Today's trip was a warm-up for better days on the water. Thanks for the comment