The Good Stuff with Bryson and his Mom

Today was another memorable fishing trip with Bryson and his Mom on . We had a couple of hours of fishing before the humidity set in and we lost most of the shade.  Bryson is getting to be an accomplished bluegill fisher boy.  He still has some work to do in handling the bigger gills, but today he manages to lip and release the smaller fish he caught. The crickets and nibblets were the bait of choice for the morning using a popper and slip shot. All the bluegills were caught in water 8 to 10 feet deep. I don’t whether you guys have ever fish for bluegill or catfish with the hook tip with either a white or chartreuse nibblet, if not you should give it a try. The fish will go after the nibblet before they inhale the cricket. It is really an excellent attractor to get the fish interested especially on slow days. The slim that is emitted from the nibblett gives off a scent that the bluegill, catfish, and even bass go after. 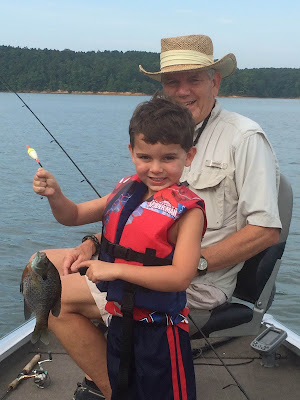 Just one of the big bulls Bryson landed using the microlight combo, he is still working on the casting technique; the landing technique he has mastered. 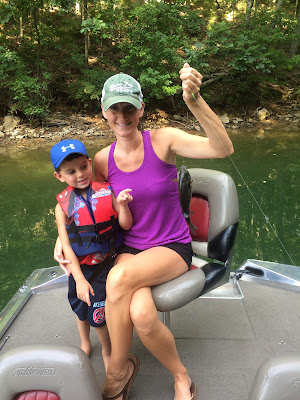 This big bull is the largest Jenny has ever landed on Smith. I wish I had my scales with me today to weight it, I am sure it would have pushed a pound. She landed it using the 7 ½ ft. microlight with a light action Shimano spinning reel. All the microlights were spooled with 4 lb. test line. 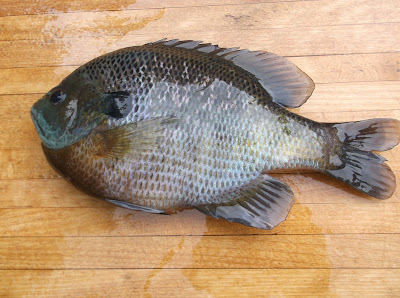 Great stuff, Bill! Those are some serious bulls right there!

Not sure I kept up with how old Bryson is, but he looks like my age when I started fishing for Gills. He's off to a good life of fishing if he keeps it up. See how I turned out. Probably shouldn't look too close.

A blessed day for sure.

I love seeing the addiction passed on. Sportsmen in the making.

Daniel
I hope Bryson has found a sport that one day he can do into his old age. thanks for the comment

Kevin
Got to love it!!!! thanks for the comment

Mark
If he loves fishing as much as you, then he should be a pro by the time he is in teens. Thanks for the comment

Great photos of a productive family outing, Bill. And an artful arrangement of 'gills to boot! Your grandson will be quite the angler.

Walt
I hope he will love the fly fishing one day as much as he likes the spincast fishing now. Thanks for the comment

Begeebers, Bill, those are some really nice Bluegill that you got the young ones into. Those are the trips that memories are made of. Hopefully, the family will continue to fish and create foot steps for their generation also.

Alan
So glad we have the technology today so Bryson can look back years from now and see how he got started fishing. Thanks for the comment

Bill, you know I'm a sucker for a good bluegill story. Smith Lake is beautiful as is the picture of Bryson with Grandpa!

Howard
The bluegill is my second favorite fish to go after, the trout is my first love. Thanks for sharing