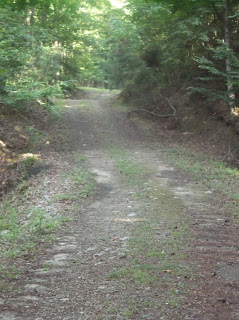 An early morning walk along the road running parallel to the tailrace had me anticipating numerous hookups with the recently stocked rainbow a few weeks ago. In fact, I was so confident that had tied on my favorite nymph I usually fish early in the morning here with great success. Low humidity and a slight breeze made it seem a little like the approaching fall, which is some months away, but it doesn’t hurt to wish.
As I approached the water's edge I stopped to survey the area and notice as usual there was no surface activity to have me wishing I had tied on a dry. I begin working my usual spots with no success, so time to start experimenting with other patterns. I don’t know about you guys but after about 15 to 20 minutes of one pattern with no success, I change flies and tactics. It is now and no takes after over an hour of fishing numerous patterns. I continue to work my way up the gouge, fishing some familiar places and some I haven’t tried this season. I kept noticing a few rainbows every 15 to 20 minutes breaking the surface but not actually feeding on top. I had seen this before here and knew that the nymph and dry were not the flies I needed to use to make a connection. So what next, I am now well into my second hour with no trout landed and still trying to beat the skunk. I knew I had to go with a pattern that would just break the surface and at the same time stay up high in the water column. My logical choice was a red soft hackle fly size 12. I don’t know the exact name of the pattern, but I had fished it in similar situations here before and had success. It is getting close to lunch and with more confidence and my new red hackle fly, I begin casting upstream and letting the fly slowly drift back over trout I continue to see feed subsurface. A few missed takes made me work even harder to touch my first trout. Some of you may see where this is going, and say he found the magic fly that finally proved to be the charmer, not so. I gave the fly it’s more than fair share of making a connection but to no avail. I’m one to never give up on solving the lockjaw problem of fish on certain days, so I had one last thing I wanted to try before the generations were turned on and I had to call it a morning.
With an occasional trout still feeding subsurface, I decided I would tie on another soft hackle pattern size 18 brown color.  I started working the fly but was having trouble getting the fly to touch the water in a delicate mode, so I changed tippets to a 7X which gave me a much better presentation. Not to panic, but a glance at my watch showed me I only had roughly 20 minutes left before the generators would start gushing walls of water down the gouge. With the generation time schedule on my mind, I begin working the little brown hackle above a couple of trout that was still in subsurface mode. I figured if I was lucky enough to land my elusive trout today I had at least 250 yards of space between me and the huge wall of water that might take me under.  As time ticked away I kept trying to land my one trout that would keep the skunk off my back for the first time on the Sipsey. With ten minutes left I saw another trout come up and barely break the surface. I had to move a little downstream to make a cast that would give me a decent drift that hopefully would get its attention. I made a long cast that sent the fly across the tailrace waters. As the fly drifted over the area where the trout had broken the surface total silence from the trout below. A few more cast left I assumed before the horn sounded; surely one more cast would get me my lone trout for the trip. It was not to be, the horn sounded and sent me moving out of the water and to safety up the bank.
Today was my first skunk day on the Sipsey, and I’m sure a few of you guys have experienced the same type of trip. As I walked back to my truck I kept wondering what I could have done differently to land just one trout. So I thought I would put the question to you guys, what pattern would you have used on a day with subsurface feeding, clear blue skies, and a slight wind coming from all directions at times?
Posted by Bill Trussell at Monday, July 27, 2015

I've had a few days like that. Can't say that I figured it out, but when I see fish coming to the surface but not feeding on top I start with a zibra midge under pinch on indicator, next a 20-22, midge emerger or a griffiths gnat stripped under the surface. If none of those work, I go someplace else...I don't need that kind of frustration in my life.

I would have tried some sort of streamer.

Sometimes it's just not your day. Even with the right flies.

I agree with changing every 15 or 20 minutes. All during the story, my mental clock was counting down to the horn. Good story.

Drew
I agree to go smaller when the subsurface feeding is happening; I will give the emergers a try next time this occurs. Thanks for the comment

Kevin
Some days the trout win. Thanks for the comment

Mark
I guess that is why we have all those flies in our box, to give the trout a little variety. Thanks for the comment

RM
Never really thought of a streamer, I will give that a try. Thanks for the comment

Any honest angler (yeah there are some here and there) will have a day or two like this every once in a while. It seems like you used a good approach and strategy. I probably would have focused on a delicate cast with a small caddis emerger or a midge pupa. And hope for the best. Thanks Bill.

I don't have the patience I used to have Bill, so I'd go for something totally unheard of. I've got plenty of no-name flies that I'd try for awhile but I'd eat and call it a day.

Bill we all have those days. Switching flies makes us think we'll choose the right one, but not always the case.

Well, Bill, all I can say is that you are not alone here with this story. Yes, on some days the fish win the game of fishing. Part of the fun is laying out the strategy for your next trip, where chances are you will win the game with the trout of the Sipsey. Thanks for sharing your moment to moment story.

Walt
The midge pupa and caddis is something I will try if I encounter this type activity again there. Thanks for the comment

Howard
I have the patience, but not the time if one is fishing a tailrace where the generators are a factor. Thanks for the comment

Alan
I keep wondering what the magic fly would have been that day???? Thanks for the comment

Mel
I have plenty of suggestions on flies to try on my next trip. Hopefully some will solve the puzzle. Thanks for the comment

Bill - I've always just fished the Dark Dun/Sandy Moorgame on a downstream swing. For the freestone waters I've fished, it tends to be a summer morning/evening pattern.

Bill - I've always just fished the Dark Dun/Sandy Moorgame on a downstream swing. For the freestone waters I've fished, it tends to be a summer morning/evening pattern.

Neil
I know the soft hackle will get attention even on days when the trout are somewhat dormant; I probably waited too late in the morning to fish the fly, next trip I will use it earlier. I was fishing a pattern similar to the Dark Dun and was getting some miss takes. Thanks for the advice