Fishing For Bluegill With Bryson 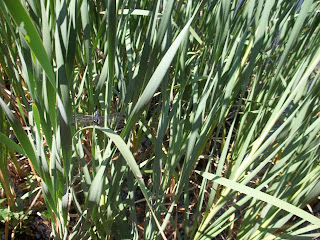 Our daughter brought the grandchildren Bryson and Laelyn down this week for a visit. Bryson was all ready for another trip to the local pond near our house to land some more bluegills. The humidity, gnats, and mosquitoes were just too abundant for an afternoon trip so we opted for an early morning outing, which worked out much better for both of us. I worked on his casting skills on this trip for a little while, until I decided it was too hard for him to master at this time. I don’t want to rush him into doing anything that he is not interested in doing. There are always other trips that will help him with his fishing skills. 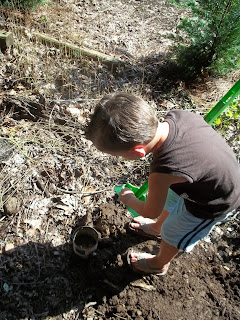 Got to get those red worms dug before we can land any bluegills. Digging for worms is about as much fun as landing the bluegills. 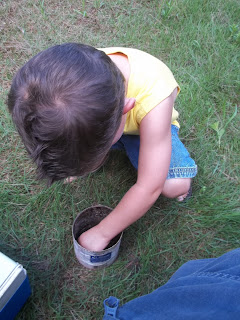 Selecting that just right fat worm. Bryson said it had to be a fat worm so he went through the dirt until he found that fat worm 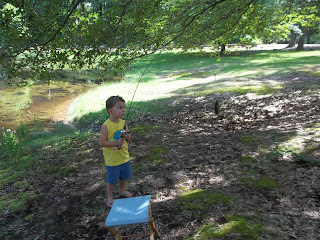 First fish of the morning on that fat worm, this fish really had to be inspected, we looked at the eyes, gills, and fins 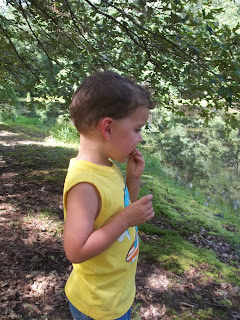 This fishing is hard work, time for a quick snack, with peanut butter and cracker 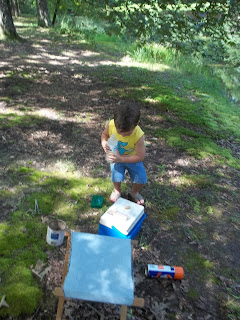 Got to have that water too 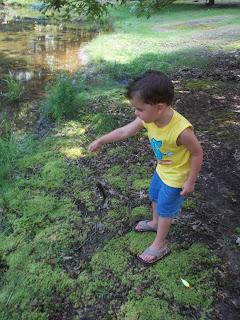 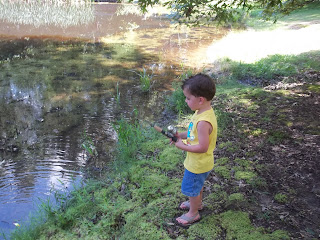 He has learned how to land his own fish now, when that float goes under he knows to retrieve that fish 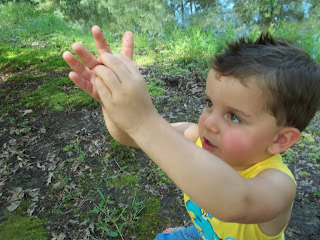 Trying not to lose that worm 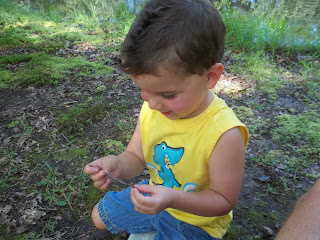 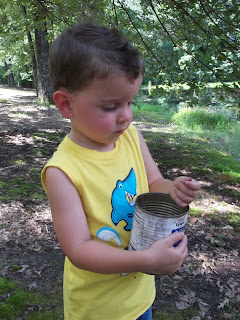 Sparing Oscar's life; he gets to go home with Bryson, this can is his new home
A fun afternoon fishing with Bryson!
Posted by Bill Trussell at Friday, July 12, 2013

Great work, Bill, building memories and having a photo trail to prove it! Your a wonderful Grandfather it appears. Thanks for showing him a great time and being patient.

Those are the trips that will long be remembered.
Well done fellas.

Fantastic post, Bill. Getting children outdoors early in life with a soft approach can make all the difference in regards to what kind of adult they turn out to be. Well done my friend.


Awesome! I am always glad to see young people enjoying the sport. I'm sure you had fun fishing with your grandson as well!

And a mighty fine partner he is.

Mel
Bryson would have had a good time even if he had not landed a fish, he loves the outdoors. thanks for the comment

Colorado
Bryson's dad is an outdoorsman, and I am glad Bryson is following in his footsteps---thanks for the comment

David
We are both looking forward to another trip soon. thanks for the comment

Mark
I find myself doing things for Bryson I never did for my son, I guess when you are retired you have more time as opposed to when I was younger and working. thanks for the comment

I bet you had just as much fun a as he did.

Kevin
Yes I did, he is one great Grandson! thanks for the comment

Looks like a good time was had. Kids and bluegills go together like peanut butter and jelly.

Bill
We couldn't leave the house without the peanut butter and crackers. thanks for the comment