Continuing my Bluegill Quest Against the Odds 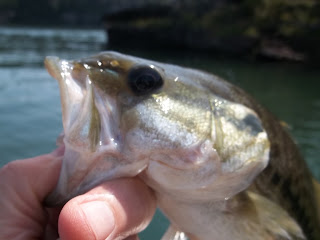 All the rain we have received lately has caused heavy generation on the lake, which means no trout fishing below the dam. So the alternative was a trip to Smith today to continue my bluegill quest.
Upon arriving at the lake I noticed there were very few boats that had launched for the morning. This told me that the fishing might be somewhat slow. There was a slight breeze out of the south with a light chill in the air which convinced me to wear a long sleeve shirt while I motored to the area I was going to fish. The lake level was up and the generators were on, which meant falling water. Falling water, wind out of the south, and a slight cool front set the morning up as a challenge; but I was up for the task. 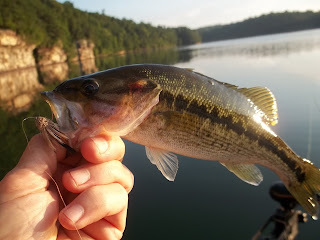 First fish of the morning, a nice 12” spot using the 4 wt. Redington. I started the morning at daylight with no success with the Boggle Bug Popper, so after daylight I changed to the Muddler Minnow. This fly has never let me down when fishing conditions are tough. I tied on a number of nymphs with no success, so the Muddler was the choice and it proved its worth. I fished for an hour and half before I landed this fish; talk about determination. 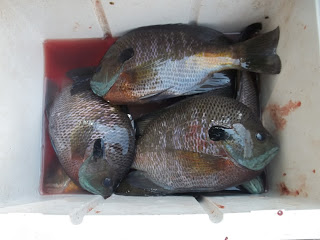 Later in the morning I moved from the shallow banks where I was landing numbers of small bluegills and the 12" spot to deeper water. The deeper water allowed me to find some nice bull bluegill near rock ledges in the shade. These were a lot of fun using the my 4 wt. Redington.
I didn’t brother to remove these bluegills from the cooler because you guys have seen this size before for the quest. Trust me these three did qualify which puts me 61 away. After a lot of fishing with bright sunlight and humidity rising I called it a morning knowing I had met my challenge. I dressed 7 from this cooler, all landed on the super Muddler. 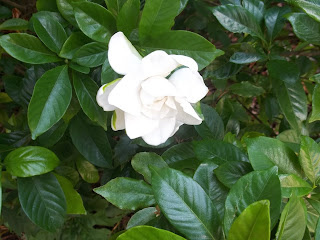 Nice bass, and your quest go's on.
Bill how deep is the lake?

Alan
Smith Lake is considered one of the deepest lake in the south. The deepest areas are a little over 300 ft. deep. It is super clear, one can see down 12 ft or better. The National Game and Fish has rated it the cleanest lake in the south. When the lake was flooded the water cover lots of trees and even some small tenant houses. Thanks for the comment

That is a really deep lake with lots of territory to track fish. Admirable job, my friend, sticking with it and landing some solid Bluegills. Were you fishing a smaller Muddler for the Bluegills?

Oh man, I can't wait to land some bass on my fly rod! You are doing great with your gill goal! good job!

With a deep lake like that, the water must be cold. Are trout present?

Howard
I hate to admit it but if I don't come up with some fantastic numbers in August; then I will miss the goal again this year. Thanks for the comment

Mel
The Muddler is a size 6 for the bass and sometimes I changed to a size 8 for the gills. Both sizes worked well on either species. Thanks for the comment

J
I have to warn you fly rod fishing is very addictive. Thanks for the comment

Alan
There are no trout in the lake. Yes it would support trout, but there is much more interest in bass fishing on the lake as opposed to trout fishing. There is smallmouth in the lake but only a hand full have ever been caught. The water temperature down 12 to 15 ft. hovers in the 60's, so yes trout could survive.
In the county where I live there are only 3 or 4 four individuals who fish below the dam for trout and I am one of them. All of us fish together either below the dam or above the dam with the fly rod. All of us have mentioned stocking trout in the lake to the Game and Fish, but it has fallen on deft ears. Thanks for the comment

Mark
A good time to try the stuff I sent you would be fall. I am doing a post for Sport Fishing next dealing with the nibbles and the color jigs to use each time of the year. My brother is landing lots of crappie using the injection nibbles in the tubes now. Hope you get top try it soon. Thanks for the comment

Nice pics, reminds me of some waters here in Kentucky. JGR

Keep chasing them! I'm going to share your link at Panfish on the Fly at Facebook because you've got a lot to offer.

Pretty fish there Bill, thanks for sharing.

JGR
I have a feeling the lakes there are as deep as Smith. Thanks for the comment

Josh
Thanks for the shout out on Facebook, ---the quest is getting more difficult every year. thanks for the comment

Daniel
Bluegills on the fly are special--thanks for the comment

Good fish sir, it is always tough fishing when water levels are on the decline.