Experimenting With The Seal Leech Pattern 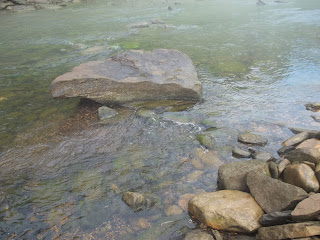 Fishing the Trout Derby Saturday on the Sipsey tailrace afforded me the opportunity to experiment with different fly patterns and different fishing techniques. The experimenting came about because of the slow bite while fishing the . There was virtually no hatch, which resulted in limited dry action and slow nymph action. A lot of the fisherman started going through their fly boxes to select a pattern that might get some takes.


I had tried all the usual patterns in the dries and nymphs with no luck, so I tied on what I like to call a mini bugger in the form of a fly called the Seal Leech, David at The Trout Zone tied for me back in the spring.

So with about 20 minutes left before check in I tied on the Leech. I knew I was going to fish the fly dead drifting and swing casting it through some of the runs I fished earlier in the morning with the dries and nymphs. I had lost two trout around on nymphs in this run, so back for those two and hopefully more. I waded into position and made my first cast up stream and let the line swing into a curve position and started to strip line when I got my first take. It was no earth shadowing take but I knew I had a trout on immediately. I promptly landed, photographed and measured the trout which measured 10 inches and released it back into the water. I checked my watch for the time, which indicated Charles and I had roughly 10 minutes to make it back to the fly shop to check in at the hour. So reluctantly I waded out of the water to where Charles was waiting and we walked back to his truck and LEFT!!
So with one cast, one unique pattern and no time left to make additional cast that ended my Derby for this year; but rest assure I will be back next year with this little leech and ready for any eager trout to take it. That one take and one trout proved something to me Saturday to always be innovative and experiment, because you never know when you will tie on that magic pattern.﻿
﻿
﻿
Posted by Bill Trussell at Saturday, July 06, 2013