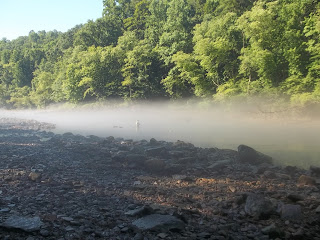 I normally don’t fish anymore on weekends, now that I am retired; but getting to fish in the  Saturday was worth wetting a fly. As mention in Thursday’s post Charles was my fishing partner for the morning. We arrived at the Riverside Fly Shop on the banks of the Sipsey Tailrace around . No one could actually go on the water until . The 6 AM time was needed to go over the rules and hand out packets including meal tickets and coupons for the drawing of the big trout prize which was the KC kayak. The other prizes were a guided fishing trip, mystic fly Rod combo and cash to be awarded at the conclusion of the event at .


There was an excellent turnout with over 45 participates fishing either from a kayak or wading. We were informed at the 6 AM meeting that numbers of trout measuring 16 inches to 20 inches had been released in the tailrace on Thursday, so all the participates perked up when they heard that bit of news. No one landed any that size for the morning. The largest trout recorded for the day was a little over 13 inches which won that individual the Kayak. On the Sipsey Tailrace a trout 12 inches to 16 inches is considered a nice catch.


I can’t say enough about how well the event was planned and organized by Randy and Brandon owners of Riverside Fly shop. Both these guys have done so much to promote fly fishing on the Sipsey and in the state of . What a pleasure it was to get fish in the this year with my buddy Charles. Both of us agreed we will be back for next year’s . 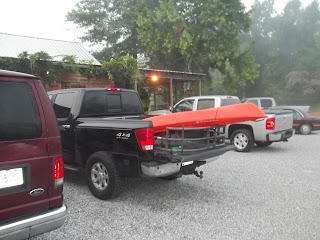 Early morning arrivals at the front of the fly shop 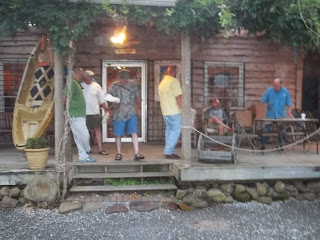 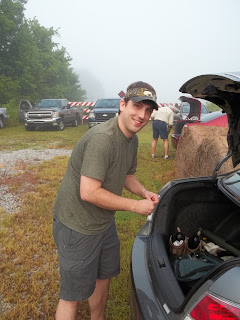 Kyle one of my former students, getting his flies set up for the morning. He is an outstanding fly fisherman, who fishes the Sipsey a couple of times a week. I hope to get to fish with him Tuesday on the Sipsey. 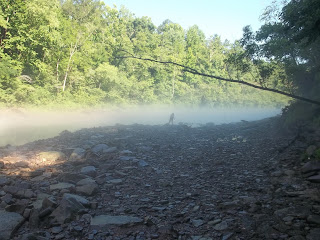 We spot one lone fly fisherman in the distance, as we make our way to a couple of runs, which by the way we got to fish 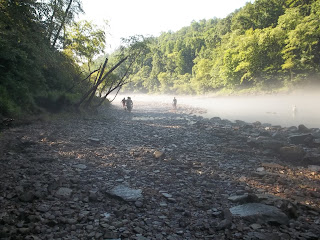 More fishermen going to their favorite spot--it did get a little crowded at times, but there were no complaints from anyone. 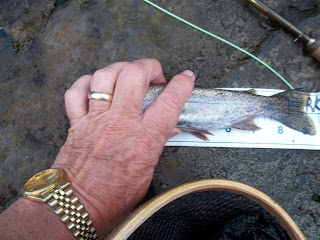 My first and only trout of the day; it was tough day for everyone, there were no fish taken at all on dries, the few that was landed were taken either on nymphs or small streamers. I landed my only trout on the Seal Leech tied by David at The Trout Zone. There was no hatch at all during the five hours everyone was allowed to fish, which eliminated the dry action. Everyone was given a ruler to measure their trout and then release the fish. The camera was used for verification of the catch. Ten fisherman scored with landing trout out of 45 participates. 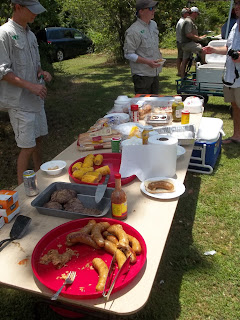 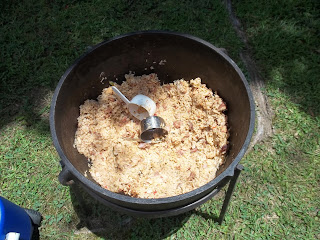 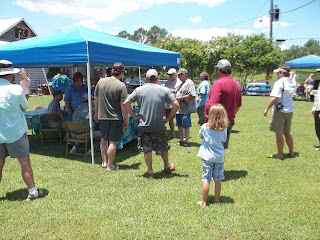 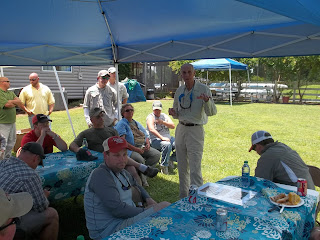 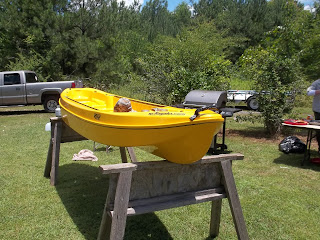 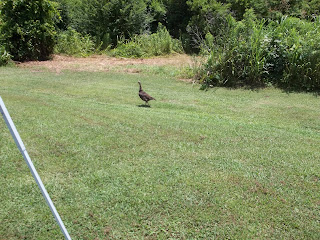 Seems you still did a fine job as far as the tournament goes if only 10/45 caught fish and you were one of them. How long did you have to fish? Again seems like a great time for everyone involved.

Atlas
We fished from 7AM to 12AM, which was over in the hurry. It was a tough day for landing trout; but the Derby was not all about landing numbers of fish, the numbers were in the amount we made to support our big trout project. We raised over 1500.00 for the project. Thanks for the comment

Sounds like a lot more fun than the Bear River Derby. Would have been nice if you could have hooked one of those 16 to 20 inchers.

Mark
It was a lot fun indeed and next years event should be even bigger. I hope some of the Southern bloggers can fish it next year. thanks for the comment

Nice going Bill. Loved the post and loved the fact that you caught a fish. Sounds to me like a perfectly fun day.

What a great day. Congrats to all who participated. Good looking gumbo.
And the mist coming off the water, awesome.

Bill, I'm glad the tournament was a success and that you had a good time. Even better that you caught a fish! Glad that fly is still working for you!

Alan
The gumbo was seasoned just right not too hot. Looking forward to next year. thanks for the comment

David
I fished the leech using a swing drift across the fast current areas, which produced the only take of the day for me. I will need more of those when you get back to Colorado. Thanks for the comment

Bill! great friends, great food, beautiful weather and it looked like smiles all around! Doesn't get any better than that! Tight lines

Noco
A great time for everyone involved, looking forward to next year. thanks for the comment