The Spotted Bass a Worthy Opponent on Any Tackle

I thought I would use today’s post to give you guys some information about the hard fighting Spotted Bass. To me, this fish is on the same level as the smallmouth when it comes to an aggressive fighter. Probably the major difference in the two is the aerobic action the smallmouth has over the spot. I seldom land a spot that goes airborne. This is not to say they want to go airborne, but most of the time they go deep with some awesome strong runs.
I thought I knew this fish fairly well until I read the following article.

The Spotted Bass (Micropterus punctulatus) is also called Alabama Spotted Bass, Black Bass, Kentucky Bass, Kentucky Spotted Bass, Linside, Northern Spotted Bass and Redeye. It has been known as the bass for many years, which was further reinforced in 1956 when 's General Assembly as they passed a senate resolution establishing the spotted bass as 's official game fish.

The Spotted Bass is often mistaken for the largemouth bass, though it does not grow nearly as big. It is a lesser known member of the black bass group, but this is a spunky and distinguished looking species that most anglers enjoy catching. While they jump less often as the smallmouth bass, they fight just as well.

The Spotted Bass reaches maturity by the end of year one, but will not spawn until year four. The spotted bass can be caught with all traditional baits and lures that work with largemouth bass, though the size of the lures and hooks should be smaller as the record bass is no more than about seven pounds. Also smaller hooks will cause less damage, which is key for catch and release in reducing the mortality rate. However, if the fish is going to be lunch, this is likely not a big concern.

As mentioned above, use the same tackle used for catching largemouth bass, just be sure to right-size your lures for the smaller size. We recommend using smaller lures and stepping them up if required.

Like all freshwater fish, the Spotted Bass spawn in spring when the water temperature reaches 63°F/19°C. This can happen as early as February in the southern . The male clears a gravel bed where the female spotted bass comes to lay its eggs. Once she lays her eggs, she is chased off by the male who looks after the nest and then looks after the fry for a few weeks after they hatch.

The spotted bass can be caught with casting, trolling and fly fishing methods. Fly fishing is recommended for more experienced anger and requires a different set of tackle. For beginners, keep in mind that even a basic set of tackle including wadding gear will cost at the minimum $300.

I landed these four keepers today to add to my quest, I am now 65 away 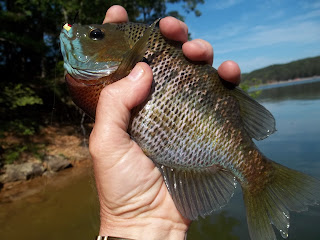 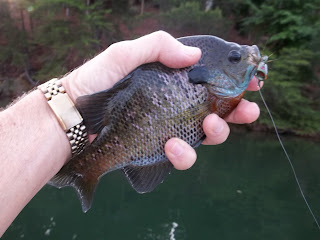 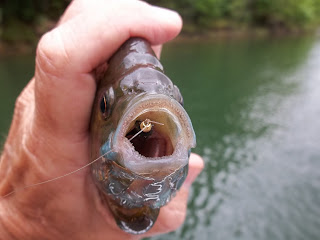 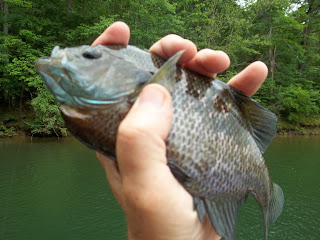 Another fell prey to the Leech--all four taken on Smith Lake
Posted by Bill Trussell at Sunday, June 02, 2013

Bill, thanks for the education on Spotted Bass. The Smallmouth Bass is one of my favorite fish to catch. So that gives me some idea by comparison. They have to be a lot of fun to chase.

Thanks for the lesson Bill. What I know about bass wouldn't fill a thimble. Nice photos as well.

Daniel
When one thinks of fighting bass, smallmouth come to mind, but most forgets how hard the spot fights also. thanks for the comment

Mel
I have to use the spot in Smith to replace the smallmouth---it works for me. thanks for the comment

Howard
I even learned some things I didn't know about the spot too. thanks for the comment

Alan
I have found that fishing in general is always a learning experience. thanks for the comment

Great post Bill! Nice job on the fish. I have caught very few spotted bass, but they are always a memorable fish. Thanks for posting this. Keep plugging away at that gill count!

Trail
Enjoy chasing those spots, well worth the effort--thanks for the comment

Sounds like you have the same case of Bass on the Brain that I caught this spring. Thanks for the info Bill.

Bill thanks for the great information Nice photos and I am glad you are knocking down that bluegill count! Nice fish! Thanks for sharing!

I do think that spotted bass can be great but I do believe they are more cautious than largemouth and smallmouth bass. I have taken more Spots on nymphs than the others too. I tend to find more of them schooling in streams leading to lakes than smallies.

Josh
I agree about the cautious part, the big difference I find in the spot and smallmouth is the jumping after the hook set. The spot tends to power deep or side ways to try to break off without the air jumps. thanks for the comment