A Day on The Sipsey Tailrace Landing Rainbow 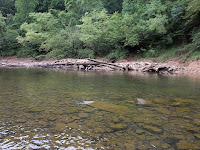 I made an epic fishing trip today, no not to fish for bass or bluegill on but to finally get to cast for some rainbow on the Sipsey Tailrace below Smith Dam. This was my first trip of the year there and one that proved very productive.


I noticed as I crossed the that the water was muddy. I was hoping as I traveled the two mile road running parallel to access 5 pump station that the water would be much clearer. When I arrived I was not disappointed; the water was super clear and there was an excellent flow. 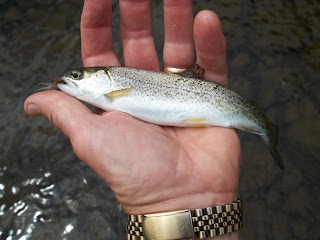 I landed this rainbow at which was a late start for me. I had overcast skies and one other fly fisherman in the area which is what I like when I fish the Sipsey. The first cast I made produced this bow, using Alan’s Bomber. The aggressive take and the anticipation of more dry action signaled good things to happen for me the next couple of hours. 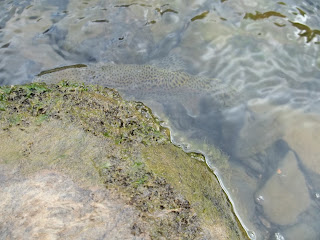 The Bomber worked its magic again as this rainbow exploded on the pattern right at the end of a good drift. I notice it took a minute after the release for it to regain its strength, before it darted off to fight another day. 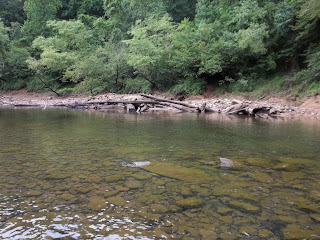 This is one of the runs that the Core of Engineers with Alabama Power created last summer on the tailrace. It is an excellent area because of the large rocks that was placed across the bottom at the beginning of the run. The depth here is between 3 and 4 ft. deep. The rock area in the photo is about a foot deep which leads into the run next to the far bank. I was able to get some excellent drifts in the run, which enable me to land some 11 to 12” rainbow in this area. 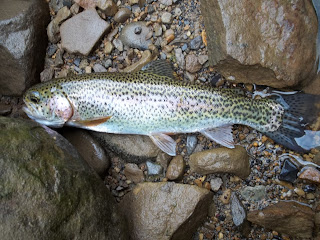 Another nice rainbow taken on the Bomber, I really like this pattern because of the hackle that Alan used. It gives the fly the ability to float high without using a tremendous amount of floatant. I landed six rainbows from this one run. I found myself doing more false casting than I normally do; but it helped to maneuver the fly for a good drift. I will get an image of this run on my next trip. It has some really fast water to maneuver the fly through. 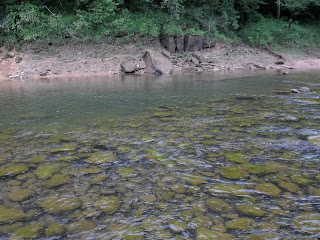 This is the next good run I moved to; there were some spots of sunlight peaking through the cloud cover so I decided to change flies and go with a smaller pattern. I have notice on this tailrace after some good takes on a particular pattern the trout here seem to recognize real verses fake; so onto the size 14 Caddis.  This is really an unusual run with deep pocket water and sunken logs on the bottom.  I could see some really nice trout here but I never got a take from any of the 15 to 16” size. 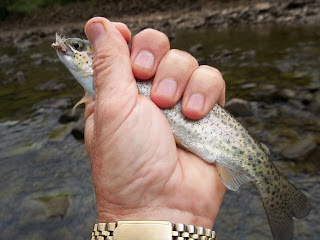 The Caddis connected on the first cast with this bow and the dry action continued for the next half hour from this one area. 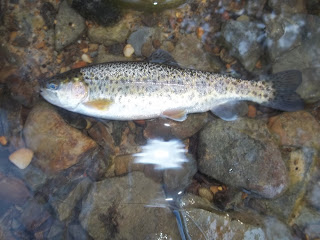 A nice healthy bow taken on the Caddis right before the sun started taking over the area, which means the bite turned off. I hope this trip is an omen of good things to come for me this year on the Sipsey. I don't know the exact number I brought to hand but I can say it was one of my best days with dries here.

There is nothing more fun that a good take on a dry. That looks just like my kind of place. Good job.

Bill I'm happy for you. You finally got to cast for some trout.

Boy howdy, Bill, those are some nice Rainbow from some beautiful clear water. Agree with Mark, dry fly fishing is a blast when you hit it right.

Congrats, Bill! Do you folks get brookies down in your neck of the woods?

Born in the wrong Century said...

Mark
A lot of work and a lot money went into this tailrace--I hope we can stock the brooks and browns in the near future. thanks for the comment

Mark
I hope this is the beginning of a good season for me. thanks for the comment

Mel
This place is special, now that all the work has been completed. This is the closet I can get to a western stream. thanks for the comment

Anthony
We are hoping to get some brooks in the near future. thanks for the comment

Rick
Can't wait to get back up there next week. thanks for the comment

Excellent outing! Looks beautiful there! So, awesome that you were spot on with your choice of fly, and it was a dry. Good stuff, Bill!

Justin
Really nice place to land some beautiful looking rainbow. thanks for the comment

Even the small ones are great, aren't they?

That is a beautiful river! Glad you were able to get back into some trout!

Josh
The small ones put up a great fight on the 2 or 3 wt. especially when you landing one against the current. thanks for the comment