A Nice Surprise While Bluegill Fishing

Fog and more fog was what met me and my buddy at the launch yesterday morning at . I hate to try to even get on the water when the fog is that dense. After waiting for a half-hour at the launch it was time to make my first cast. I could barely see my popper near the bank, and the only evidence of a hit would have been the sound on the surface of the water. 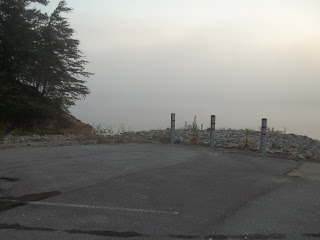 Notice how thick the fog is right at the water's edge 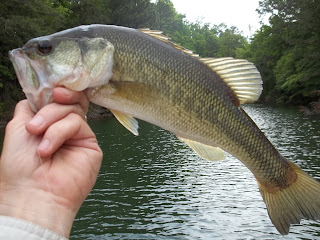 Nice largemouth to get things going 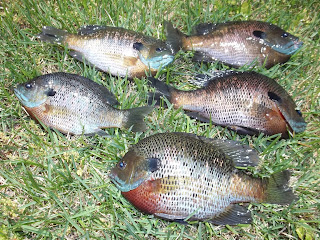 I only get to count one here, which was taken on the Betts Popper--still fishing with the 4 wt. here 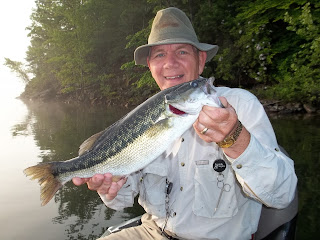 The surprise of the morning was this nice Spot on my favorite popper of all time the Boogle Bug. I landed this male using my 5 wt.  9 ft. with an olive green Boogle. It was a blast landing this fish because of the runs he continued to make to try to break off. The 4X tippet withstood the runs he made mainly because I was able to get the fish on the reel soon after the fight begin. This is why I love fly fishing so much because landing a fighter like this Spotted Bass will certainly test your skills as a fly fisherman.
Posted by Bill Trussell at Tuesday, May 28, 2013

It looks like the topwater bass bite is on!

Bill, that's a sweet spotted bass there and all the more impressive since you got it on top! Good work!

Congrats Bill, that's a trophy. And on a fly rod Bravo.

That is a great bass. I bet it was a blast seeing that guy hit on topwater. Did the fish just sip it in or slam it?

Jay
It get better as the water temps warm more--the good fish are waiting on you guys! Thanks for the comment

David
I love to land these Spots on top, especially with the fly rod. I usually use my 6 wt. for top water action for bass, but decided to go with my 5wt. to land big bluegill, and got this guy instead. Thanks for the comment

Alan
I hope this is not my big fish of the year. I have hopes of landing one a tad bigger. Thanks for the comment

Kevin
The hit was so light I thought it was a small bluegill playing with the popper, not aggressive at all. As I pull the rod up fast to set the hook all "hell" broke lose. He made numerous runs as I stated in the post. I was trying to get him on the reel as soon I could, because I knew he would pop the tippet without drag help. Once on the reel he made music with the drag system off and on for at least 3 or 4 minutes. I always go after the bigger Spots at daylight every time I fish Smith this time of year. This time I got lucky. They are one awesome fighting fish, especially on the fly. Thanks for the comment

All great fish Bill. What a riot that largemouth must have thrown while being hooked. Nothing beats the top water action!

Bill, I don't know how you manage to keep count on your quest. Those are all nice, nice Bluegills. Never hooked or fished for Spotted Bass, so my friend I applaud what appears to be a great fish.

Trail
It is always a blast to land one of those spot. thanks for sharing

Justin
The bite will get better as the weather warms. thanks for the comment

Mel
The Spot is somewhat like landing a big brown, a lot of runs and air jumping. Super fun!!! thanks for the comment

Good job with the Bass.

Oh man, that spot is sweet! Bass are so fun to catch! I need to buy a fly rod NOW! haha

J
If you ever start fishing with the fly rod, you will never go back to casting or spinning rigs. thanks for the comment