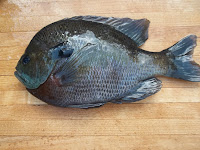 Rock Creek was the target for today’s fishing trip. I wanted to go back to some of the areas I had fished three weeks ago on my bluegill quest; with a new plan in mind. The overcast skies and low humidity made the conditions much better than three weeks ago. I decided not to concentrate so much today on the bass, because here lately the topwater action has been extremely slow for the Spotted Bass and Largemouth Bass. I wanted to see if I could find the big bluegills back on the beds since I was fishing right after a full moon. As a lot of you know the moon phase triggers the spawn in early spring and again in June and the last one in late July or early August. This, of course, can vary in different parts of the country. I knew the bluegills would be back in the nooks off the main creek channel. As fate would have it I found my first big cluster of monster beds in a pocket of the main Rock Creek channel at 7 AM. I counted twelve huge beds with three big bluegills located on three of the beds. I have found that not all the beds are occupied on the second and third spawn, and in this cluster, there were only three beds being guarded. I positioned the boat so I could be horizontal to the back of the nook. It was a perfect set-up with no wind and the water surface like glass smooth. The water was extremely clear so I knew I couldn’t get close or they would jet out to deep water. My first cast was at least . and the Betts popper landed gently on the backside of the bed clusters. I never move the popper, I just let it sit there for a few second and wham the popper was gone, and the big bull-headed straight for deep water. All big bluegills in this lake have the same objective when they take the popper to go deep and try to find the structure to break off. This one lost the battle in a depth of .  I repeated this process six different times throughout the morning, locating beds and enticing the big takes and having a blast fighting these brutes on my . 3 wt. The great thing about today’s trip was the hit, I could actually see the fish come up from 8 to . deep to nail the fly. In fact, they would create a small wake towards the popper as they inhaled it. I can’t begin to tell you guys what a rush it is to experience that kind of action towards your offering, but of course all you know this I forget sometimes I am not conveying all this stuff to armatures. I ended the trip around with at least 2 dozen bluegills which included some smaller females and males, a couple of small bass, and of course the 6 big boys I kept for my quest. I am now 26 away from my goal of landing 100 supersize bull bluegills during the spawn. It is going to be close but I think I may make it during the last spawn. 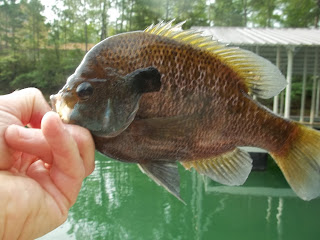 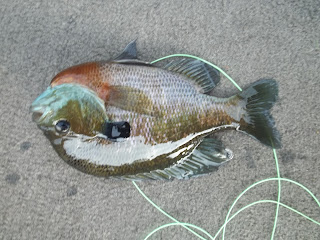 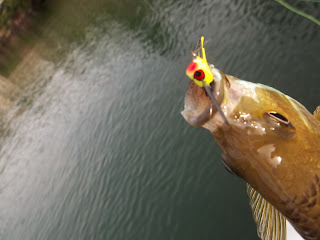 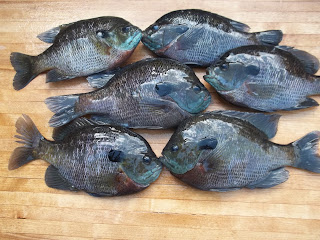 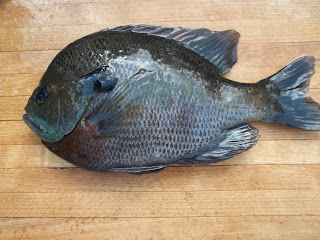 Awesome, you're getting there!

You'll get there, I have faith in you.

Way to go, you knew when to let up on a slow bite for some hot action. Getting stuck in a rut sucks the fun out of things ;)

Are you keeping all of them?

Your into the home stretch now buddy.

I have faith in you, too. Keep on rocking it out! I'm going after some tonight in the dark.

Devin
Close but no cigar yet---thanks for the commnet

Anthony
Hope you get into some huge ones. Thanks for the comment

Brk
It will take a while to get there, because they are scattered and not in large bed groups--usually two or three in bed clusters--thanks for the comment

Kevin
I keep all the ones featured in the post. My wife and I eat a lot of fish baked. These bluegills are some of the best with cole slaw, fires, and hush puppies. We have fish year round. Thanks for the comment

Blake
Establish a pattern and that is what I did today and it paid off for me. Thanks for the comment

Mark
Didn't make it last year, feel better about this year--thanks for the comment

Oh, my, Bill those are some beauties! I am thinking this is the year for the Hundred. Love that surface fishing.

Mel
I have a feeling you are going to be able to get into some surface action now that you are retired. Thanks for the comment

Bill, those Bluegill look great! I usually catch bluegill in a pond close to my house but what other types of waters can I look for in order to catch some of those bad boys?

J
You can land some really big gills in rivers and even bigger ones in well fertile lakes. Some of these big bull bluegill never spawn and just stay in deep water all their lives, making them grow to enormous size. Thanks for the comment

Interesting info about the multiple spawns Bill. I wasn't aware of that. Tell you what - I've learned a lot about bluegills by following your posts. Good stuff.

Ty
I forgot to mention in my post the condition of the bluegill during their last spawn. They lose a lot of their weight during that last spawn, due to lack of eating throughout the spawn. The fish you land in August doesn't have the fight that the early spring bluegills do. They are really awesome fighters during the first spawn in April. Thanks for the comment

...those gills look pretty tasty right now....might have to make a trip to the pond this evening.

Sanders
I hope everyone is not getting tired of these bluegill post, but I promise I will be finished with this theme soon. Thanks for the comment

That's a lot of bluegill there! You have definitely got the corner on that species!

Are you saving up for a fry??

RD
These bluegill are blast on the fly. Thanks for the comment

Josh
I keep all the gills I post on the blog, haved enough for all winter--thanks for the comment