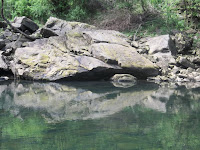 Today’s post is a 1 punch, with three different topics all in one package. I did a post about a week ago on the tiny Tippet Ring. I was looking for an easy way to attach your tippet to your leader, well I found it. Yesterday’s trip involved testing this little bugger and it proved to be a winner. I really like the fact that you don’t have to tie a blood knot when attaching your tippet to the leader when using this little ring. It is so handy you merely tie the tippet into the ring and you are good to go. I broke off a couple of times yesterday in a few trees and had to replace my tippet both times and was back to fishing in a matter of seconds thanks to this little ring. I hope it performs as well with dries and nymphs as it did with the poppers and buggers. I did notice I didn’t get one line twist when using the ring. Now on to the next bit of news—
From time to time I am going to be featuring new blogs that I have found and joined up with. Today’s feature blog is Spare Time for Fish by Anthony Gardner. This blog has some great information on Warm Water Fishing. The blog covers everything from fly fishing accessories, fishing for crappie, crap, bass and yes bluegill. In fact, food is covered in this blog as well. If you haven’t checked out Spare Time for Fishing it is worth the look.
Now for my quest or goal; for those of you who have been keeping up with my goal I am trying to land 100 super bull bluegill during the spawning period. Well, yesterday it just got easier. I started the morning at in heavy fog and it didn’t let up until . It was so thick I couldn’t see to navigate my boat after I launched so I just started fishing down the bank from the launch. Nothing was happening as far as the bass was concerned, mainly because of the fishing pressure all week from the Military Tournament. In fact, I didn’t land any bluegill until the fog let up and I moved up through Butler Creek which I had not fished since last year. I was using my 4 wt . with a Muddler Minnow. It produced early until the sun came up and then I tie on a Chartreuse Black-legged size 10 Betts Popper which worked better in areas where the sun hadn’t touched the bank. I lost two of these poppers in trees where the fish are never found, and manage to leave with one in tack. I was a little disappointed with the bass. I will take the bluegill any day when the big bulls are cooperating. 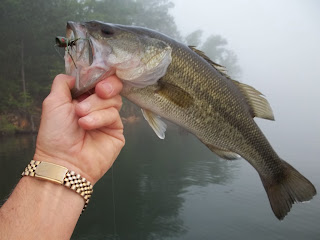 One lone bass which was a largemouth that had been caught in the tournament. It had hook marks inside it's upper lip--this one came on the Olive Boogle Bug with the 5 wt. no more bass action after this guy 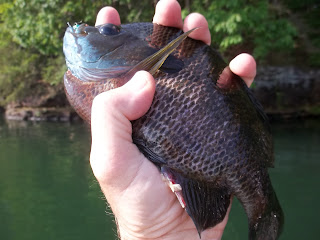 This one was really fat and put up some kind of fight on the 4 wt. I think next time I will bring along my 3 wt. 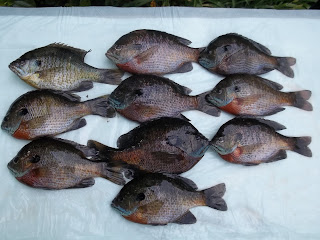 These count toward the goal, a couple here were near a pound. These 10 put me 38 away. I ended the trip with 16 brought to hand. I fished an area today where there was less boat traffic. The boat traffic is a killer when one is trying to fish on top with the fly.
Posted by Bill Trussell at Monday, May 07, 2012

Tippet ring, I will give this a try. Another great post from the Trussel. Well done on those gills!

Good post!
Bill...maybe you have it in an older post somewhere...what is your criteria for the big bluegills that "count"? Is it a certain length? A certain weight? Or some other criteria?

Great post Bill. One thing, I didn't know you could fish for "crap"?

And i too caught some hefty bluegills while on my kayak. I'll do a post on that soon!

Your within striking distance of your goal.
Bill have you ever fished a Muddler for bass?

Colorado
Those rings are worth the purchase. I haven't used them on dries or nymphs, but will be giving them a try next week. Thanks for the comment

Dave
Last year when I set this same goal and didn't make it; I set the weight at 8 oz. Some of these bluegills can be short with a very thick body that will enable it to reach my 8 oz. goal. As I move forward with the goal this year it will get harder for me to weight in 8 oz gills--because the big males lose some of their weight while guarding the bed throughout the spawn. I caught some Saturday that was a good length but the body was slender, which means no 8 oz. Early in the spawn a lot of the gills can be short and really fat and really put up a good fight, but as the spawn winds down they become slender and have much less fight. Thanks for the comment

Devin
I will fish for anything that swims with the fly rod. There are crap in the lake where I fish and I hope to land at least one during the season. Thanks for the comment

Brk
I haven't tried the Muddler for bass, but that will be on my list of flies to try for bass next time I hit the water. Thanks for the comment

Mark
I know now why I need a good supply of poppers and buggers when I am on the lake. Thanks for the comment

Bill you may have answered this as well, but are you eating them?

Thanks for the mention, Bill. I really appreciate the comments! Also, where do you tie those dipper rings on? I guess I still don't understand the mechanics behind them...

Howard
My wife and I eat Bluegill or crappie twice a week. All the fillets are baked, very seldom fired. The fillets are beyond good, with cold slaw, baked fries not fired, and tartar sauce. Thanks for the comment

Great post! Shouldn't be long now before you hit that goal.

Sanders
It will harder to hit the goal, because the spawn is winding down. I only have 2 to 3 weeks left. Thanks for the comment

This was a good suggestion that you put up here...dude…..hope that it benefits all the ones who land up here.