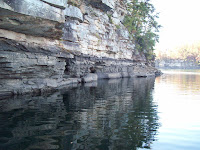 I made a quick trip to Rock Creek yesterday to fish areas of Smith that I haven’t fished in years. I forgot how beautiful the Rock Creek area is, especially the high rock wall formations with all the cave holes carved out in the walls. I was competing with a huge bass tournament with some 125 boats zipping up and down the creek most of the morning. I felt good about landing fish on top especially some nice Spots, but they were not cooperating. Even fishing the fly rod by myself in Rock Creek couldn’t entice a hit. I was fishing the Boogle Bug brand on my 5 wt and had my 4 wt rigged with size 8 Wooly Bugger. I have to add a plug here for the Boogle Bug; it has to be the best of the best when it comes to poppers. This popper is so durable and tough that they will last season after season. Back to the trip, I fished from until using nothing but the white Boogle Bug which during that time produced some nice bluegills to add to my total count for the spawn. I did release some smaller bluegills that for some reason thought they were big enough to inhale the size 6 Boogle.  The key to getting the big hit was placing the popper right against the rock wall. The hit would come 10 to 15 seconds after the popper had landed lightly on the water’s surface. These big bluegills seem to know when the presentation was heavy instead of light meaning no action. I never used my 4 wt all morning, because the action was fairly consistent on the popper, so why break up a good thing. After today’s outing, I am 48 away from my goal. Saturday morning I hope to add to the total and have some quality Spots to report on. 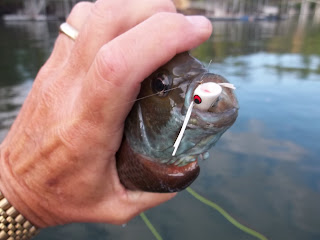 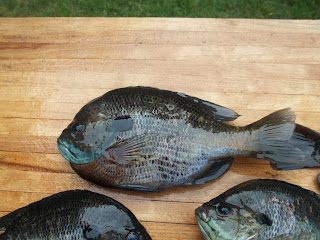 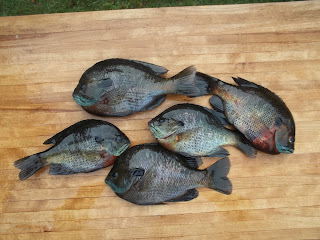 The way your going, your gonna have to up your quota ;)

Absolutely fabulous fish. Man, they get big where you are from!

Nice gills! I bet that was a gas on the fly. I love huge rock faces to look at while fishing. Very picturesque! Those poppers look amazing as well. Awesome report Bill!

Nice post Bill and congrats on getting closer to your goal. BTW I think you should be the Boogle Bug spokesman!

Look at the shoulders on those things!!!

Bill, you have been catching some seriously impressive fish! I'm jealous!

What's the water depth you are primarily fishing?

Awesome fish! Funny how a fish always seems to know a good or bad presentation.

Keep going, over half way there!

Now that looks like a really good time! Way to go!

I think I used that same fly today and go the same results.

Rick
Catching these bluegill is a hoot!! Thanks for the comment

Rick
Catching these bluegill is a hoot!! Thanks for the comment

Sanders
The big bluegills seem to know if the popper or fly is realistic--not the smaller ones they will hit anything any way it is presented. Thanks for the comment

Chris
The average depth for the bigger gills is 25 to 30 ft. That is why you have to have patience to wait for the fish to come from the depths to hit the popper. I usually wait 10 seconds or more to get the hit. Thanks for the comment

J & M
These bluegill were not the same size as the ones I landed 4 to 5 weeks ago--there were three in the pound range. Thanks for the comment

Brook
The really big ones are a blast on the 3 or 4 wt. Thanks for the comment

Brian
When you are fishing in a beautiful place it only adds to the trip. Thanks for the comment

Anthony
Three in the pound range. Thanks for the comment

Blake
I think it may take me three or four weeks to reach my goal. Thanks for the comment

Man do those fish look awesome.
The poppers are really molested.

Hey Bill, you're one of my heroes! Great job on moving up a few notches on your goal. Those are some beautiful, fatty gills. I'm going to have to scout around and find some like that. I'm hungry.

Dang, those are some nice bluegill. Been following your progress on your quest closely, so I always look forward to these updates!

Man those gills would give my 3wt. a work out. Excellent fish. Nicely done man. I know where to come for some MOnster Gills thats for sure. Thanks for sharing. Tight Lines.

Brk
You never know which popper will work best for each trip. Sometimes they want a dark color and a light color works best other days. Thanks for the comment

Howard
I don't know about the hero thing, but I do know that you and I are in the same lane when it comes to fishing. Thank buddy for the comment

Ty
I really had a successful trip today, I will be doing a post on the trip in a couple of days. Thanks for the comment

great report man, and some great gills there!!

Casey
Thanks Casey for the stop by-still got a ways to go. Thanks for the comment