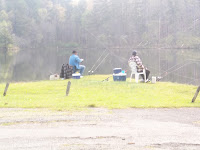 Monday was my second fishing trip in my quest to reach the 100 mark for Bull Bluegill. For those of you who are not familiar with my challenge; which is to land 100 super bull bluegill in the spawning period of 6 weeks.  For this trip I decided to rig something a little different. I started with a foam popper in size 6 because I wanted something to land softly and at the same time attract attention on the glass smooth water at . First cast of the morning produce a nice bass in the backwater of the launch nook. I knew I only had about an hour before the wind that this lake is famous for got up and would force me into the backs of the small nooks. The foam worked to perfection early landing a couple of huge gills and some smaller females before the wind and sunlight took over. After the wind got up I moved to the back of nooks with what else but the Black Gnat tied on my 4 wt. I continued to land gills some were not the size I was after but still fun on the 4 wt.  After about an hour of fighting wind from every direction; I found a nook with some shade and less wind that I could actually fish with the cork popper. I moved up and down this bank which was about . long with depths of 5 to . I landed some of the best gills of the day on this one bank. The water temp here was between 68 and 70, which is still too cool for the spawn. The magic number for the spawn is 75 and at the rate the weather is warming here, it won’t be long before these fish are on the beds. The light chartruse black leg bug popper seemed to irritate the big boys and they would just annihilate the fly every time it got near. This type action is what makes me keep coming back for more; when they are this aggressive it is heart throbbing. I thought at times they would actually break my .  3wt. Streamflex. It really got a work out on this trip. I was there about 3 hours and the action was continuous with bass, females and bull bluegills inhaling the poppers and wet flies. Fly Fishing trips like today is what makes bluegill fishing a blast for me!! 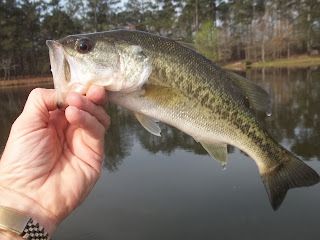 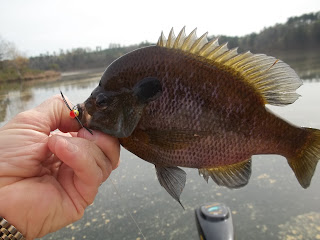 This big boy killed the cork popper. I have found that black leg poppers work better this time of the year other than white or chartruse. It may a spider thing?? 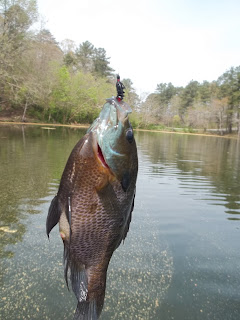 Another counter on the Black Gnat. I know you guys have heard me say this before, but this one fly has to be the BEST wet fly I have ever fished for bluegill with. It seems to work when nothing else will get their attention. The sick part about this fly is the company that tied them went out of business. I may be asking some of you guys to make me some copies when I go through these. 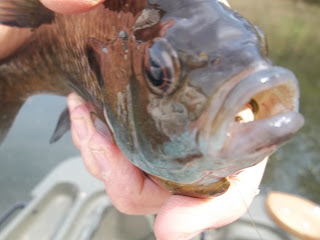 This big bull inhaled the foam popper early in the day 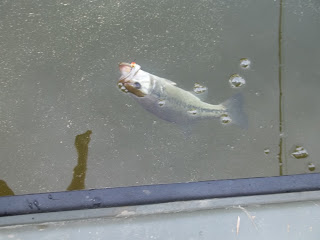 Last bass of the day, he went airborne a couple of times before finally swimming up next to the boat. I landed 6 bass before the day was over---always a lot of fun on the fly rod 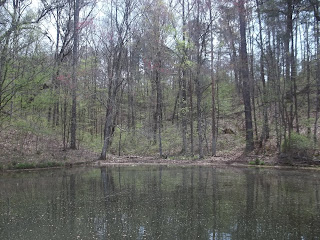 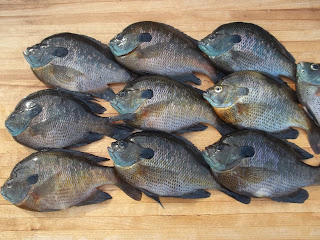