Getting Our Kids Involved in the Outdoors

I did a post back last spring concerning kids fishing and the lack of interest by the general public and the huge sporting goods stores not promoting kids to get into fishing. Well I have been seeing more and more fishing outings for kids now than I did this time last year. No it is not because I did a post concerning this problem, but I think the big sporting goods stores are realizing that they are going to need these kids in the coming years to replenish the aging fishing population that will be occurring in the coming years. Sure there are still plenty of distractions to keep kids off the water fishing but I think it is improving. An example of getting kids involved in fishing is the recent article I came across recently. I hope that I keep seeing more of these articles and groups and organizations willing to devote their time to our kids. 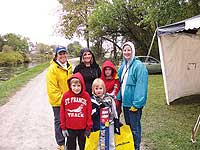 The purpose of the event was to provide school children with an opportunity to experience outdoor recreational activities, according to OECC officials. Children enrolled in Akron Public Schools were invited to participate, as well as children living in Coventry Township.
The Cargill Bluegill Fishing Derby, a catch-and-release event, offered participants the use of fishing poles and bait provided by the Cuyahoga Falls Walleye Club.
After the fishing derby, Summit County Councilwoman Paula Prentice (D-District 8) and Debby Rolland, of the OECC, led a half-mile Fit Kids Walk. Participants also were provided with healthy snacks and beverages, as well as an opportunity to win raffle prizes and a bicycle from Eddy’s Bicycle Shop.
Shown at right at the event are, from left: (first row) Peter and Mary Dolensky, and (second row) Prentice; Debby Rolland, vice president of the Ohio & Erie Canalway Coalition; and Henry and Peggy Dolensky.
Corporate sponsors for the event also included OMNOVA Solutions Foundation, Forest City Enterprises, Bridgestone/Firestone Trust Fund, the Ohio Department of Natural Resources, PNC Bank and Towpath Credit Union, along with numerous individual donors.
In September, Summit County Executive Russell Pry, in collaboration with Summit County CounBcil, sponsored a resolution acknowledging National Childhood Obesity Awareness Month, according to county officials. By doing so, officials encouraged citizens to become more aware of the issue and urged parents and/or guardians to promote physical activity among children.

These types of events are much better for out kids than the  watching T.V or playing computer games. A big thumbs up to this organizations.
Posted by Bill Trussell at Wednesday, October 20, 2010

Good post Bill. Agreed, kids need to experience at least a little of the outdoors. Even if they don't like it, they'll never know if they don't give it a try.

Can't get enough kids out fishing. They are the future of the sport.

Mark
I agree ---but the fishing industry has a lot to compete against-computers, i-pods, t.v ect. thanks for the comment

Michael
I feel the parents are the key to get kids involved in fishing, although some parents may not be interested in the outdoors or fishing, so you have a catch 22 situation there--I do know guys that I have fished with that told me they got started fishing through a friend or a relative. Thanks for the comment.

I found out that this blog is very interesting and informative.
Best of luck to you!

Hajarwan
Thanks for the compliment and hope you can use some of the info I have posted. Thanks for stopping by and commenting.

Even if it is some sorta conspiracy...at times ya gotta trick kids into doing what's good for them :)

Hope you have a great weekend bud!

Dennis
Hats off to you Dennis for getting your kids involved in the outdoors. I did the same thing years ago. Thanks for the comment