My Largest Kentucky Spotted Bass Ever Using the Fly Rod 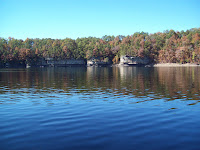 For me today it was not my ordinary day on . Mike and I were fishing shade with some cooler temps in the 50’s. The water temperature was running between 69 and 70 degrees. The fish were far and few between. The water was extremely clear and extremely low. The lake this time of year is down 10 to 12 ft. getting ready for all the spring rains. We moved into one of the high rock walls areas in the area where I had landed some quality spots earlier this year. I had been using my 5Wt. 8 ½ ft. Redington all morning with a dark turquoise size 4 popper. The poppers I have started using is the Booglebug brand because of their finish and the eye detail. With only limited success on the turquoise (small rock bass and a couple of largemouths, I decided to tie on a # 4 size charturse black-legged popper. I was using a 5X tippet. I chose the light tippet because of the clear water. As I have mentioned in previous posts the water is so clear in this lake one can see 10 ft. down. So the lighter tippet gave me a better chance of getting the hit. As I moved the boat into a position to make a long cast into one of the rock overhangs, I notice some movement under the rock overhang. I twitch the big bug a couple of times with no success. So another cast was in order to the left of the rock overhang. As I twitched the bug lightly I saw the wake and then the bug was gone. I immediately set the hook and the fight was on. The fish started to move into the 50 to 60 ft water trying to strip the hook out. I was using my line at my feet to give the fish all the lead way it wanted. I told my buddy to take control of the trolling motor as I moved to the back of the boat to get a better feel for the fish which I had not seen. As all my line at my feet was gone I finally manage to get the fish on the reel, which helped out because I needed my drag to help handle this fish which I still had not seen. The drag was humming and the fish was still going even deeper as the depth finder registered 110 ft. I told Mike that I had a big catfish, because of the depth dives this fish was making. After about two minutes into this battle, I finally was able to see the fish as it came up about 50 ft. from me, and that is when I went ballistic. This was the largest spot I had ever caught on the fly and as a matter of fact the largest spot I have ever caught period. It weighed in at 3 ½ lbs and proved why the Kentucky Spot is one of the toughest fighting fish around. I would put it on the same level as the smallmouth. They are extremely hard to catch in this pound range because they didn’t get to be this big by being dumb. I have caught a lot of fish in my life and I would have to say that this catch is at the top of the list. For 2 minutes this morning, I experienced something only a few fishermen can experience in a lifetime---landing a huge Kentucky Spot on the fly rod. I was told at the dock that this could be a record for on the fly rod. I will check and let you guys know.  -----Side note: little did I know this would be one of many big Spotted Bass I would land on Smith in the coming years!! 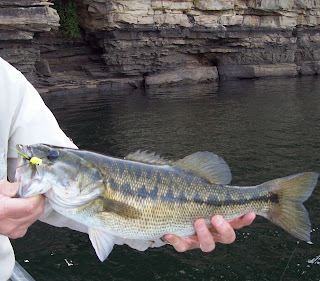 The big bug had a death hold 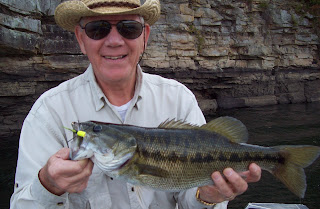 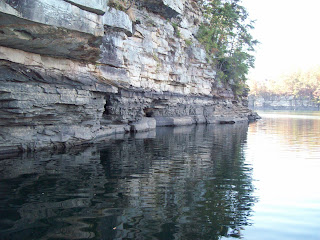 The rock wall the big male came from.
Posted by Bill Trussell at Saturday, October 23, 2010

Congrats. That is one awesome fish.

Now that is one big Spotted Bass! There has to be at least a handful of fish that size (or larger) in that area...

What a great looking powerhouse of a fish that appears to be, Bill. Kudo's to you for the fine effort in handling him. You gotta' love those Bass!

so do you guys have someone recording the records of fish caught with different methods? I always thought they didnt care how you got it just that you got it,,
but congrats if you have the new record for that lake, for that species, on the fly, on the surface.

Congratulations on this special catch! That is an awesome bass!

Texasflyfisher
They may be bigger in Texas. Thanks for the comment.

Josh
The record thing was mentioned to me at the dock, when some of the guys asked us if we had done any good--my buddy told them what I had caught and I showed the guys the picture, one of the them suggested it may be a record for a fly rod catch. I really don't know but I thought I would check on it this week. Thanks for the comment.

Mel
The spot is right up there with the smallmouth when it comes to fighting the rod. Thanks for the comment.

Congrats! That's quite the brute. That's the kind of fish you get a trophy mount made of (if you let it go).

Congratulations. That's a fish to be proud of!

Tyler
I have just looked up the record for a spotted bass and it was caught on Smith Lake in the 70' it weighted in at 8 lbs 15 oz. That is one big spot, because they don't get as large as a largemouth. I don't have a record for the spot on Smith but that was one fighting spot I caught on the fly. Thanks for the comment.

Gorges
I have the images and not the real fish but, I never wanted to keep the fish or even eat the fish all I wanted to do was just touch that awesome fish and that I did. Thanks for the comment.

Michael
I never keep any of the spots I land, they are the kind of fish you respect too much to kill. Thanks for the comment.

Bill S.
Awesome is right---it will take me a while to get over this catch, a 4lb. spot might help--thanks for the comment.

WOW! A BIG congratulations, Bill! That is TRULY a BEAUTIFUL FISH!!!

Thanks Dave
I checked on the record and the State of Alabama does keep records for fish caught using a particular fishing rig. They do for the fish itself, which I knew, but it was an unforgettable catch for me.

Bill that is awesome fish!!...and the detail in the blog entry was a blast to read....Awesome Job!!

Thanks Dennis, this lake reminds me of fishing a lake out west because of its beauty and the extremely clear gin water. Too say I like fishing this lake is an understatement. Thanks for the comment