When one thinks of the Caddis Fly they relate it to fly fishing for trout. I have fished this fly numerous times on the Sipsey mainly using it as an indicator fly. There were times when I would get a trout to inhale the Caddis while slow drifting a nymph under it. Which was a plus because I was trying to get the trout to take a smaller nymph drifting below. I use the traditional dry-dropper combo more now on the Sipsey because of the fishing pressure. I remember previous years fishing the Sipsey I never used the dry-dropper combo. I only fished a nymph using the various strike indicator on the market.

On my last trip to the Sipsey, which was a bust for me, no trout touched; started me thinking of using this fly to fish for the giant bluegill on Smith Lake. So two weeks ago, I gave the fly a try casting it near the rock walls in Ryan Creek. 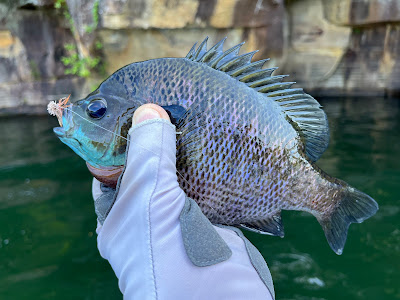 I was impressed with how the bluegills reacted to this fly. At times they would pull it under, and other times they would explode on it. I have written in a past post about how wary these fish can be in hitting a particular color or size popper. So when they are not hitting a popper consistently, it is good to have a backup fly that will get their attention. Enter the Caddis in size ten, but I think a size eight would be better. The extra body on the size eight wouldn't require me to use as much floatant and give the fish a bigger fly to see. Simple to use just cast it using a 3wt. with a 6X tippet and wait for the take while it sits motionless on the surface. I seldom ever move it after it touches the surface. Having success with the Caddis makes me want to give the Adams and the Wulff a try!
Posted by Bill Trussell at Saturday, June 25, 2022