Daylight and right before the sun goes down are some of the best times to land fish fishing for warm water or cold water species. I prefer the daylight hours in the summer months because there is little humidity during daylight. One still has to deal with humid conditions late in the evening before dark.

Jeff and I found out just how pleasant the daylight hour was this past Thursday as we fished one of the floating lights near the many piers in Ryan Creek. 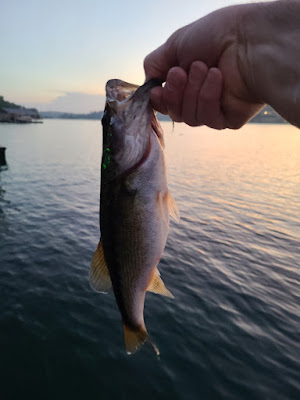 This 15" Spotted Bass put a bend in Jeff's 5wt. 9ft. Redington. A slight movement of the curved-faced white Boogle popper got its attention. Jeff placed the popper at the back of the light. The bass hit the popper as Jeff moved it slowly through the lighted area under the light. The male spot didn't disappoint us it headed straight for the deep water. 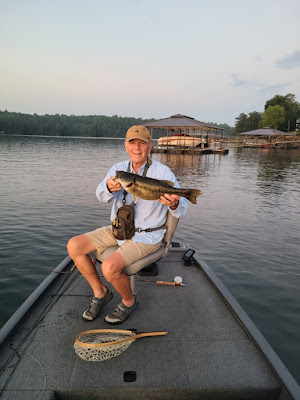 Right after Jeff landed his Spotted Bass I noticed another bass in the outer rim of the lighted area. The Bullet Boogle Bug I had tied on my 4 wt. 9 ft. Redington paired with a Gloomis 4 wt. reel was the combo I used to land this female Spotted Bass. She hit the popper as I was moving it out of the lite area. I saw the wake as she came up and inhale the popper. She immediately started taking line off the reel. At one point I thought I wasn't going to have enough line on the reel to land the fish. I never use backing on any of my fly reels but after this episode, I may rethink adding a little backing to my 4 and 5 wt. reels. Minutes went by before I got to touch this fish because most of the fight occurred under the floating pier. I thought I lost the fish because there was no movement which had me thinking she broke off and got me hung on something under the pier. As I put side pressure on what I thought was a hang-up I felt the fish coming to me and swimming slowly out from under the pier. That is when I felt I had a chance to land this fish using the drag on my Gloomis reel. She headed for the depths of the lake which was a plus for me. After numerous runs, I finally lifted her in the boat and won the day fighting a worthy opponent in the Spotted Bass! Right after landing the fish, the light turned off by the pier which made Jeff and I thankful for every minute we had to fish before the sun peaked over the trees in the east. The rest of the morning was devoted to landing a few smaller bass and of course numbers of big bull gills.
I've landed hundreds of bass and bluegill with the Boogle Bug poppers and the place I purchase these fantastic poppers is -----BreamBugs-----
Posted by Bill Trussell at Sunday, June 05, 2022