Survival of Stocked Trout in Tailwaters 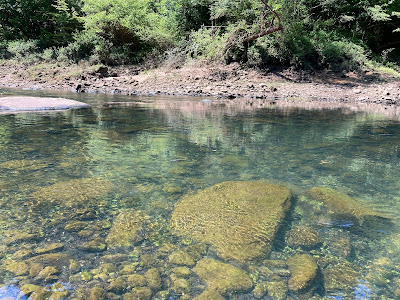 I received an email the other day from one of my fly fishing buddies concerning stocked rainbow trout in the Sipsey Tailrace that we fish. The email contained a study conducted by an Auburn University student in partial fulfillment for a Degree of Masters in Science.

Hypolimnetic discharge waters (the layer of water in a thermally stratified lake that lies below the thermocline, is noncirculating, and remains perpetually cold)  from reservoirs in the southern U.S. provides water temperatures cold enough to support Rainbow Trout fisheries in regions where they otherwise could not exist. The Sipsey Fork tailwater in Alabama provides such an opportunity and is stocked with Rainbow Trout monthly. In a recent survey, less than 25% of the Rainbow Trout stocked each month were harvested and few trout appeared to persist in the system for more than 3-4 weeks. The objective of this study was to describe post-stocking dispersal and the fate of the non-harvested Rainbow Trout. In March, June, and October 2017, and January 2018, numerous Rainbow Trout were radio-tagged and tracked to document movement patterns and to determine longevity in the tailrace. Tagged Rainbow Trout had dispersed an average of 4.1 km or 2 .54 miles with only 30% of tagged Rainbow Trout remaining alive five weeks after stocking. The extent of predation on Rainbow Trout was assessed using a bioenergetics approach. Electrofishing surveys and diet analysis of predators identified Striped Bass as the primary predators of Rainbow Trout in the Sipsey Fork. Bioenergetics simulations revealed that approximately 500 Striped Bass living continuously in the tailwater from March through October could consume all Rainbow Trout stocked each month. Knowledge regarding the dispersal and fate of stocked Rainbow Trout in this system can improve the management of the fishery.

I respect the findings of this study but see little chance of reversing the effects the Striped Bass have on trout that is stocked in the Sipsey.