If you fish long enough you may think you've learned everything there is to know about this great sport. There is always new gear, accessories, flies, and equipment to enhance the skills or catch ratio of any fisherman. Like many of you, I am willing to try a new fishing product if it improves my chances of landing fish. The Sink-Tip Poly Leader at Orvis is one of those products I purchased some months ago but never used until this past Tuesday. This is a sink-tip leader that can be used as an extension of your floating fly line. You simply loop to loop the leader to your fly line and you are good to cast. The leader has a monocore tip which I cut off and tied in a tippet ring instead so I could change my tippet much faster instead of using various knots to attach the tippet. Once you add two feet of tippet from the tippet ring you are fishing a leader about 9 ft. I choose the intermediate sink tip leader from the four sink tip leaders they sell. This leader sinks at a rate of 1 1/2 inches per second and by adding a bead-head nymph the tippet line is sinking close to the same rate as your sink tip leader. The Orvis link will give you a detailed description of all the Sink Tip Poly Leaders they sell.
Jeff and I ended the season Tuesday fishing Ryan Creek on Smith Lake. I checked the forecast for Tuesday mainly for rain and didn't think of checking for wind. We arrived at the lake with wind gusts 10 to 15 mph and temps in the low forties. We knew the fishing was going to be slow and we had to find rock walls out of the wind. With that in mind, we proceeded up Ryan Creek in my Tracker Boat until we located the one wall suitable to fish. I found out years ago that there are two negative factors when fishing surface flies, wind and sun. We had the wind but not the sun. We were amazed we landed a few bluegills and smaller spotted bass with the surface temps at 65 degrees. The popper action ended almost as quickly as it started when peaks of sunlight penetrated through the cloud cover. With the surface action over for the morning, I knew what I was going to try, my sink tip poly leader rigged with a bead-head wooly bugger. I had been planning this trip for a couple of weeks. I even tried the sink-tip leader rigged with the wooly bugger in a small pond where Cathey and I walked. I was impressed with how easy it was to cast using my 5 weight Redington fly rod. In other words, I was sold after landing the largest Spotted Bass on Smith Lake this year. 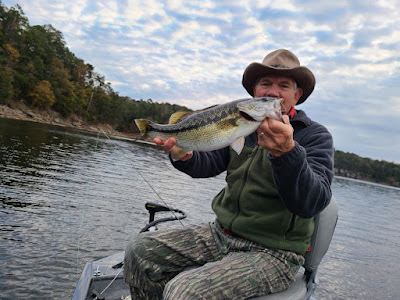 This pot-bellied female took me for a ride into the depths of Ryan Creek. I had my 5 wt. rigged with a  brown tensile wooly bugger which got her attention. I was casting the bugger as close to the rock walls and at times I would hit the wall with the head of the fly. My first fish on the bugger was a small rock bass, causing me to tell Jeff that at least one fish was interested in hitting it. As we moved slowly down the wall I continue to make shoot cast letting the excess line at my feet shoot through the guides of the rod. Once the fly made contact I started using different retrieves, in the form of short jerks, slow-moving retrieves, and at times letting the bugger drop and giving it a quick jerk. The slow drop and jerk motion is the retrieve that connected with the fish.
I can't think of a better way to end my Smith Lake fishing season for this year. I've already started planning for Spring to arrive and land some more of these fantastic fighters on the fly rod.
Posted by Bill Trussell at Thursday, November 11, 2021

Bill excellent results achieved. Late season angling is a challenge but can produce in some memorable catches. It looks late fall from the picture of you in the boat.

Well done, Bill! That is a great fish to end your lake season with.

Mark
That one fish made the morning for me---I release her to fight again next year. Thanks for the comment

Alan
I was a little late getting this image posted because of work on Jason's house---with that said the fish was landed the first week in this month on a Tuesday. The fall colors on the lake were just starting to show. Thanks for the comment

Justin
I seldom fish subsurface on the lake. Landing this fish will be the start of fishing streamers and buggers come spring after the topwater action slows Thanks for the comment

That's a beauty of a "hawg" bass, for sure! Had to be fun. I spent the morning plowing snow from my driveway -- 2nd time this week, so my local fly fishing is likely done for the year. Hate to see it end. Good post!

AIR
A quality Spotted Bass this size will give any fly rod a workout. The fish will also test your skills as a angler as well. Looking forward to the Spring season to start-----Thanks for the comment

Good stuff! Bass are so fun. Especially on the fly. Hope all is well.

Hi Emily
Hope you and the family had a great Thanksgiving--- I'm stocking up on wooly buggers for spring, a killer fly for the Spotted Bass----thanks for the comment