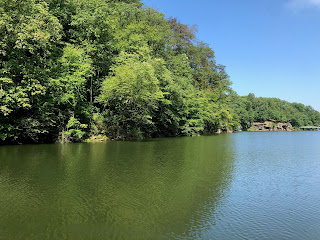 Never think you know what the fish will hit from one day to the next. Looking in one's fly box will attest to that statement. I have flies and poppers in some of the fly boxes that I haven't used in a couple of years. But I still keep them thinking one day on a particular outing that special fly will be called upon to produce some takes. Such was the case on a special outing my son Jason and I made fishing Ryan Creek on beautiful Smith Lake this past week. I say special because Cathey and I had not seen him for a year and a half because of Covid. All three trips we made while he was here fishing the lake were special. Thursday's trip was his best because the popper he was using had not been used since early last year. This was a popper that was in one of my reserve fly boxes that had been on standby for over a year. Do I need any more flies or popper no? But I keep finding flies and poppers I think will be the ONE!! I have enough flies and poppers to last me the rest of my fishing days. So, Thursday's trip begins with a 4 AM wake-up alarm enabling us to leave the house at 4:30. We were on the water at 5 AM fishing on one of the epic rock walls before the sun came up. What makes this time so special aside from the bite, is the silk smooth water surface one encounters at this time of the morning on the lake. In other words, you make the most of what time you are given before the boat traffic takes over. 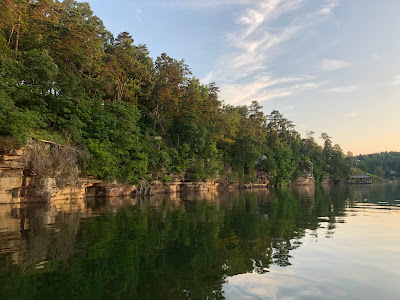 The lighter the popper can touch the silk smooth surface film the better chance you have of attracting a bite. 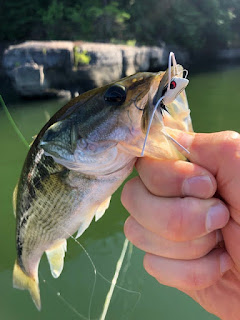 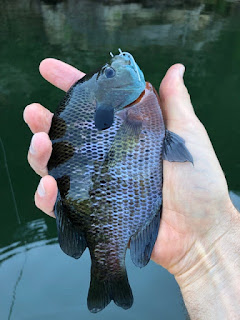 The first bass and bluegill of the morning that Jason landed. The popper that got all the attention from the bass and bluegill this day was the size 6 Amnesia Bug in pearly white. As stated in the intro this popper hasn't seen any action since early spring last year. Jason would land over 25 bass using this one popper for the 4 hour morning trip. I was using the smaller version and landed a third of his catch. 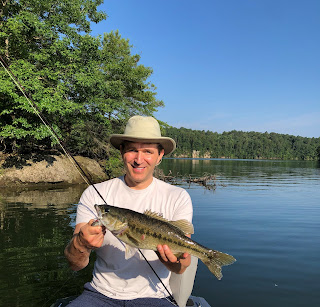 This largemouth was taken off the wall behind Jason. The bass hit light making him think it was a large bluegill. As quick as it headed for deep water stripping drag he knew it had size. All larger bass here when hook will try to break off by finding a boulder and cover in deeper water. They seldom break the surface during the fight the depth dives are their strength!
Another Largemouth landed to the right of the boat pier using the Amnesia Bug--one great popper when one is trying to imitate shad, which is the main diet of the bass on Smith. No surface fight in this video all the fight was down deep. This bass ended its fight in a depth of 52 ft. some distance from the rock wall. Next to this wall, there is a shelf depth of 20 ft. where the bass chase the shad close to the surface and inhale them as they try to make it to the wall for cover. Jason landed this fish using his 9 ft. Sage 4 wt. fast action fly rod----Jason and I are convinced if one wants to experience the ultimate fight from the largemouth and spotted bass on Smith one needs to use the fly rod. It takes skill to land these fish using a 5X tippet ---in other words, one doesn't rush the landing, because if you do you missed your chance to touch one of these great fighters!!
Posted by Bill Trussell at Wednesday, June 30, 2021

Thanks, Bill, bass & bream fishing at its best. The lake photo is a beaut! I'm wondering if I see a line of bug defoliation there along the canopy?

The tug is the drug. I remember Yuki telling me it took 10 minutes to land the 9+ pound Rainbow a few years back. Playing the "big one" is where all the fun is. Nice job guys.

Bill I'm glad you are able to spend some time with your son. It's so important for everyone.
That's a great clip.

Alan
Family time is always a plus especially when the time spent is on the water. Thanks for the comment

Mark
Funny how all these bait-casting fishermen jerk the fish over the boat to land it as quickly as possible---shame they miss the fun of the fight. thanks for the comment

Walt
There was heavy humidity the morning we were there and what you see on the water surface is the mist of fog still close to the water. Jason said he may frame that rock wall image. Thanks for the comment

Justin
4:30 isn't too early for me when I know I have a chance of landing those Spotted Bass! I wish you lived closer so I could put in touch with this awesome bass. Thanks for the comment

What fun you are having! I still have not caught a largemouth bass. The smallie was fun, so I am sure that I will get the other someday. 4:30 am is my departure time to hit the road every Saturday. People think that I am nuts. Haha. Early bird gets the worm. And the cooler weather. Sounds good to me!

Hi Emily
The largemouth was in a feeding mood that morning. I seldom land largemouth early on Smith, the spotted bass are the fish that is really active at daybreak. Jason had a blast fighting all the bass he landed, even the 12" was a blast. Thanks for sharing