Guys I can't begin to tell you how much I've been looking forward to this fishing season. Well, the weather here in the South has been so erratic that all my early season fishing plans have been washed, or shall I say blown away. We have experienced some of the worst flooding and destructive tornadoes in years here in Alabama. I like to think that this type of weather is a normal occurrence for this region, but year after year is too much to stomach. I can remember growing up as a young boy in Choctaw County Mississippi, near Mississippi State never witnessing a tornado. A little wind and heavy rain but never a severe tornado. We have already experienced 45 this season and may be on track to equal the 145 that hit the state in 2011. Of course, along with the tornados comes the heavy rains, flooding, destruction and we must not forget the loss of life occurring each time one of these monsters hits the state. I hate to be pessimistic but I feel we are going to witness even more destructive storms in the coming years. We can thank Climate Change for this misery!! I have never seen Smith Lake this muddy with the lake at 522 ft. which is 22 ft. above full pool. Numerous piers broke free of their cables and floated south towards the dam. The entire parking lot and launches at Smith Lake Dam were completely underwater. The last time I've seen the lake this high was at 518 in February of 2019 but never at 522 height. There will be no productive fishing on the lake until the water recedes at least 10 to 12 ft and the water clears some. We are looking at weeks before this happens. I am thankful I have Walker Lake to fish because it never gets muddy. 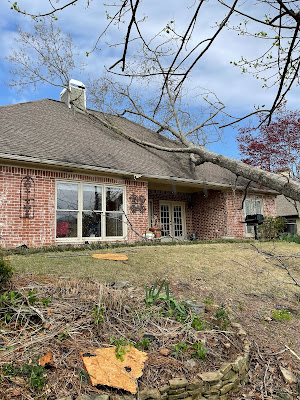 Another causality of the recent tornado we experienced this past Thursday was this house that Jason bought about three months ago in Greystone Farms. Cathey and I had been overseeing some work on the house before the tornado hit it. This house was lucky that its roof didn't collapse with this size tree landing on the roof. The base of the tree was at least 30 inches in diameter. He can be thankful that his house wasn't damaged as bad as a lot of the other homes in the subdivision. A lot of residents in Greystone lost everything including all their furniture. This one tornado stayed on the ground for an astounding 167 miles according to James Spann the main weatherman in Birmingham. He had heavy damage to his house. The tornado started in Columbia Alabama and ended in Rome Georgia. 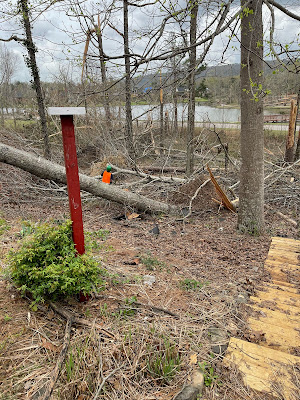 Even Jasons Alabama birdhouse which was setting on the top of this post wasn't spared the destructive winds. All the common areas along the street where Jason's house is was demolished. Some of the trees were spared but most huge trees were taken down. His house overlooks a 15-acre lake that had trees blown down in it. The mile and a half walking trail around the lake will be close until trees can be removed. One would never know there was a tornado by viewing the lake's southern end of the subdivision. Notice all the houses across the lake still intact. Funny how tornados miss some areas and destroy other areas. Cathey and I will be busy in the coming weeks dealing with storm damage and work on Jason's house. I hope to have a more favorable post soon involving landing some fish waiting to inhale a few flies. Everyone take care
Posted by Bill Trussell at Saturday, April 03, 2021

Keep safe, Bill, and hope to see you fishing soon. Not quite in the same league as you, but our seasons here seem to be ever more extreme - if it's not the wettest on record, it's the driest, or coldest, warmest, snowiest, etc.

Awww man. What can you say. Justin is out here protecting us from Covid and the weather is smashing up his property back there in Alabama. I don't know how one would describe that. It's not karma, it's not justice, it's just plain WRONG. Luck has to play into this some way because that tree could have caused a lot more damage than it did. People don't realize just how heavy a tree with a 30" base is. Glad you guys are OK though.

Bill I have been following the rains/flooding on TV. You folks have been overwhelmed. Property can be replaced but a life can not. Glad you are safe.

Justin
I've learned one can't control the weather, but as a nation and the rest of the world, we can hope the weather will become less destructive by promoting climate change. Thanks for the comment

Mark
Yes, as stated in the post, we were glad that there was no loss of life and Jason's house wasn't damaged like some of the other houses in the subdivision. We found out today that it will take a month before the house is finished on the outside.
Jason will continue to work out in California until next year. He wants to stay in his present job to help pay for some of the remolding on the house. He will be coming back to check on the house from time to time through the year. Thanks for the comment

Alan
Everyone here expects Spring here in the state to be wet with lots of rain and that is what we get now for every Spring. The only area I can fish now is the small Walker Lake which is the only clear water. Thanks for the comment

It is amazing that the tree didn't go through the roof! Wow. Quite the storm. Glad you are safe!

I'm glad you guys escaped the worst of it, and I hope that things begin to normalize a bit. Extreme weather patterns are affecting much of the country and the world, unfortunately. Up here in the Northeast, I'm concerned about it being too dry again this year. I hope that our politicians get smart enough to promote sustainable life support before it's too late, but the future doesn't look too bright at this point..

Walt
I agree these weather patterns are occurring more frequently every year now and the powers that be in Washington seem to disregard the facts about Climate Change. I hate to think what my Grandchildren will inherit weather-wise one day.

Emily
It would have cost more than the 5000.00 dollars that the tree company charged to remove it if it had gone through the roof. Thanks for the comment