When in Need of a Fishing Fix 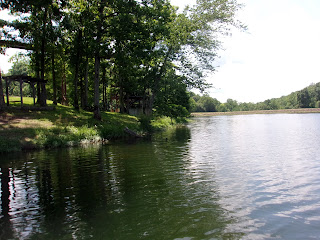 It’s been weeks since I wet a fly mainly because of chores and my bi-annual sinus infection. Two of those are standard for me a year one in the spring and one in the fall, but this year I’ve added my second one since January, so I’m due for another in the fall.

Enough of that; today I picked a state park to fish in Dickens, , which is about an hour from where we live. Cathey and I had visited the park three weeks ago just to scout the place out.  While there I found what I was really looking for which was the clear spring-fed 40-acre lake beside the hotel and restaurant. The Park Ranger told me that not many people fished the lake because they just never caught many fish there. I knew then after that statement I would be back, so today I returned for my trail and error trip. 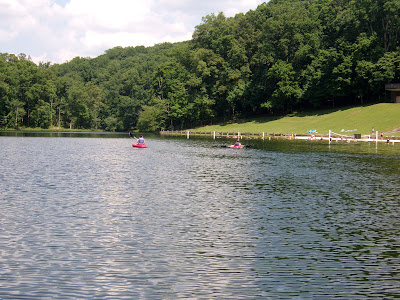 Since moving here last July I haven’t really found any lakes that can live up to where I fished in . Well, today I found one at . I’ve been in need of a good fishing fix ever since we moved here; today I got the fix in the form of lots of bluegill all coming on top. All these fish had completed their first spawn cycle and was roaming the banks in search of food.

The old Jerry Reed song kept coming to mind today “When you’re hot you’re hot” well I was hot and sweaty and the fly I was using was even hotter. I learn today like on previous bluegill trips if one fly pattern isn’t working then keep trying poppers and flies until you find something that does. The little fly that did it for me today was Mel’s Foam Krystal Beetle. He sent me three the other day. I left the lake today with one left in my fly box. The other two are still in two bluegills mouths and hopefully will come lose and both fish will survive to fight again. I think the fish thought it was a live beetle or a black cricket and they didn’t want it anywhere near them. They continually annihilated this little fly all afternoon. I was so impressed with the way it sits on the water high and realistic like. No movement was necessary, just a light touch on the water surface got the smacking sound, you guys are familiar with who bluegill fish.  Thanks, Mel for tying this fantastic little fly that made my trip today!!!---------oh forgot to mention I need more!! 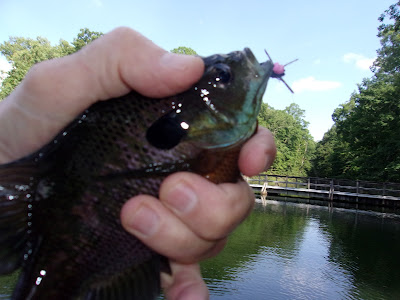 Very few bluegills had this little beetle on the outside of their mouth, this one was an exception---a ton of fun on the 2/3 weight!!! 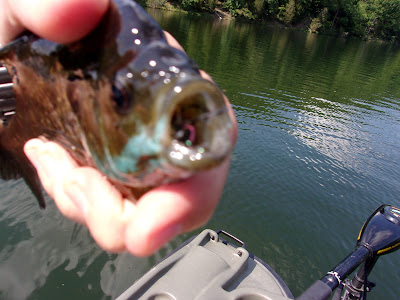 As my kids would say....SCORE.

Bill that is a beautiful lake! I think the grandkids will love it as well. As for the fishing...I think Mel has bluegill flies down to a fine art. Maybe when I feel a little better I can go wet a line as well. Thanks buddy...will there be a quest?

What a "Rush" for me, Bill, as I read this post about the Krystal Beetle and saw your pictures. I get just as much satisfaction out of seeing that as I would if I was doing the casting and catching myself! Believe me I have tied a bunch over time and have had very good success with it also. Thanks for the shout out and the reference back to my post on the Krystal Beetle.

When your hot your hot...the beetle was hot.

Bill, First of all, as a fellow sinus-infection sufferer, I sympathize with you totally. I usually get hammered once or twice a year, in winter and then some. Secondly, I'm glad you've found a wonderful little lake nearby where you can pursue a healthy course of casting those poppers and beetles. Good work!

Mark
A big score for sure!!! Thanks for the comment

Howard
Glad you are recovering and hope you make it out on the water soon, catching a few bluegills can do wonders for you---thanks for the comment

Mel
You nailed it when you tied the little Beetle.The size is perfect, because when the bluegill are picky, they usually go after something small and the beetle was what turned them on. Will be touch for more---thanks again for sending them to me

Walt
I forgot to mention in the post, the two doctor visits I made to rid myself of the latest one. The doctor told me to wear a mask when moving grass. I will follow his directions. I discovered all State Park Lakes are not fertilized, so those are the ones I will fish often, including Montgomery Bell----thanks for the comment