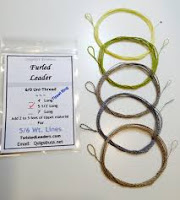 Today I was back on the Sipsey to continue evaluating the furled leader. It passed the test last week as I used it high sticking pocket water. The main characteristic of the leader that really got my attention was its low memory. Once you remove it from the package and give it a slight stretch it is ready to fish without any coiling as opposed to a mono leader. I also noticed that I could control the placement of the tippet much better with this leader mainly because of the added weight of the strands that make up the leader. Also, the grey color of the leader helps me know exactly where my tippet was during the drift through the pocket water; superb leader for high sticking.

For today’s trip, I wanted to see how it would react when nymphing and dries were added to the mix. I arrived late today and had a couple of hours to give it a try. With no hatch occurring I decided to wade into position and let a nymph drift through a small run I hadn’t fished since last year. I was using a size 14 beadhead nymph and begin working it through the run. What I notice almost immediately was how much slower the drift was with this leader. The light 6X tippet stayed in front of the leader throughout the drift. Very little mending was needed because I was just letting the leader/tippet drift with the current. As I made cast after cast I would set the leader/tippet in position at the top of the run and the rest of the way it was on its own drift. I did notice at times the leader would overtake the tippet and fly in the fast sections of the run, but after a quick mend, it would correct itself and continue the drift. 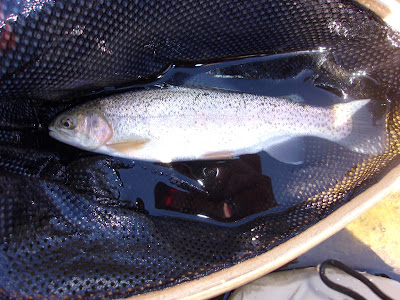 Today was one of those outings that caused me to try numerous nymph patterns until I finally connected with a bow. This was my nymph trout for the day that help prove that this unconventional drift method really worked. Two other trout were missed that helped boost my confidence level.
I moved to another area of the tailrace to cast the leader using a dry fly. There was a small midge hatch occurring in a shaded deep run close to the opposite bank. The trout were surface feeding, but not what I would call aggressively. The midges were tiny so I tied on a size 20 Renegade. The white hackle on the Renegade helped me see the tiny fly much better. I was downstream from the hatch activity and casting upstream into the feeding zone. In other words, I wanted to see how the leader performed on a downstream drift coming back to me. As I made numerous cast upstream, I kept noticing how light the tiny little fly would touch the water. As the fly touched the water I would watch as the dry would float back above the leader/tippet without any mending, this I liked. The takes were always close to the spot where the trout were feeding. Using a 4 ½ ft. tippet enable me to get the fly in the feeding area without the furled leader being noticed; I was spot casting. I discovered this technique while watching videos from Jonathan Barnes, who uses the furled leader for all his fly fishing techniques. This downstream drift was my favorite technique I tried today and is one I will continue to use on future trips.
﻿ 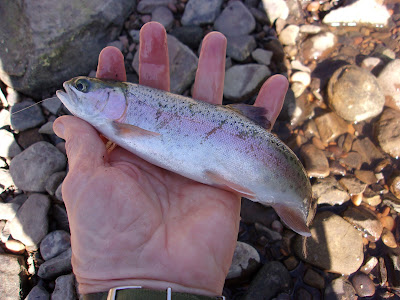 ﻿This rainbow along with others landed and lost was brought to the net using the downstream technique. I let this rainbow have the Renegade, which was deep in its throat. I hope it will survive to fight another day.

Bill, I think I feel some love for the furled leader. I do use them but not all that often because I'm lazy. I love the way a dry fly settles on the water though.

Bill, I haven't experimented much with leader types, although I've read pros and cons each way. Your review on the furled leader is a good one and leads to further consideration. Thanks for that.

Howard
I will admit the furled takes some getting use to especially when nymphing. Thanks for the comment

Walt
Three things I really liked about the furled; no memory at all, the way dries touch the water surface ever so lightly and the downstream drift. Thanks for the comment

This proves that trial runs of different tactics are needed to make it happen.
In waters that are pressured such as the Sipsey Bill I think your on your way.

Alan
I was surprised at how effected this leader can be when fished using the different techniques I used. Thanks for the comment

Alan H.
I found a bunch of companies on Ebay selling the furled leader---prices range from 5.00 to 12.00. Thanks for the comment