I am falling behind on my bluegill fishing this year, mainly because of the weather and the fertilizing of Walker County Lake. Heavy rains and cold fronts have put a damper on the bluegill fishing as well at . I will continue my quest, but I have to admit it will be tuff to reach my 50 fish limit for this year. If I do make the limit all the fish will come from . I found out yesterday they have dumped another two tons of fertilize in Walker County Lake, so that will ruin my chances there for the rest of the summer. They fertilize every six weeks.

With all said I did manage to land some nice gills at the end of this full moon spawn on Smith recently. Most all the beds I found in the coves were vacant with the exception of one or two bluegills at times still guarding beds. Those were the ones I targeted with my popper. 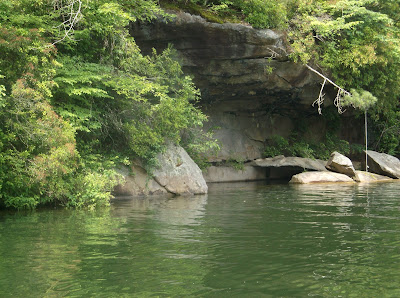 I spent very little time in one area, because I was looking for as many productive bedding areas as I could find. This particular place was kind of unique in that the bluegills had selected a small area between these two boulders to spawn. There were only 5 beds here with only one big bull still guarding a bed. I could see the fish in the super clear water, but getting him to take the popper proved a challenge. The fish would swim up to the popper for a few seconds and then back to guarding his bed. I finally decided to just let the popper sit for a while, which I assume annoyed him enough until he finally nailed it. I wish I had this one on film; he put up an epic fight on the 3 weight. 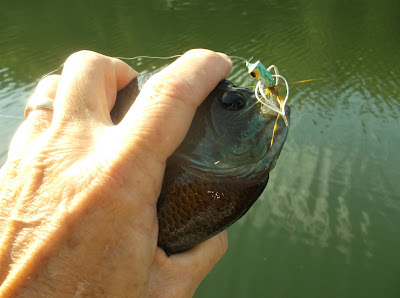 It was like him saying “get the hell out of my space”!!!! 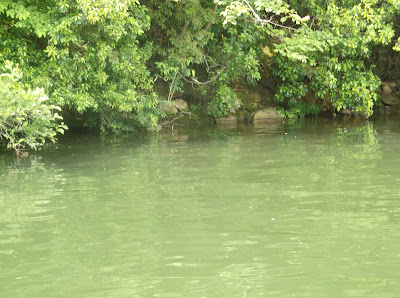 If this is the "tail end" and you still need 42, I would say a little "hurry up" would be in order.

Bill, beautiful "big" Bluegills. Of course, that is what I have come to expect when you are out fishing for Bluegill on Smith Lake. They really are a light line fish and I am looking forward to fishing them with Ultralight spinning gear once our weather settles just a bit more. Non-flyfishing question for you...........

When you are fishing your Ultralight setup with spinning gear, curious as too your choice of line on your reel? I have been using Stren Magnathin, but, curious as to what others use.

Impressive. Even if you don't reach your goal, the journey was well worth it.

Really like that photo of the lakeside with the cliff. Look's like a fun place to pursue your bluegill quest. It's these little fishing goals we set up for ourselves that make the sport so pleasurable.

Don't you just love the dark coloration on those big bull bluegills? They're so gorgeous!

Glad to see you had a little luck Bill. I always look forward to this. To answer Mel's question, I also use Stren Magnathin. It's the best line out there.

Mark
I agree time is running out, but still have the July full moon, which is the last spawn here. Hopefully I can nail a few more good ones then. Thanks for the comment

Hi Mel
Stern is a great line as is Trilene; I having starting using the Vanish by Berkley on my spinning reels. In fact I use the 4 lb. test Vanish as my tippet line on some of fly fishing combos. I can't see it in the super clear water on our tailrace here. Super sanative with my eyes invisible. Thanks for the comment

Alan
A lot of enjoyable outings left for this season. Thanks for the comment

Walt
I haven't made the quest yet, and this is my fourth year to try it. Yes a lot fun even if I don't make it. Thanks for the comment

RM
I know if I land the dark boys they are big enough for the count. My favorite warm water fish ever!!! Thanks for the comment

Bill,
I love Bluegills, too. I am building a 1# rod just for Bluegill fishing, but even with my 2# rod, I know when I have a Bluegill on the fly before I even see it. They take a fly so aggressively providing so much fun, that it's difficult to not like them!
Good luck with your count.

FlyFshGrl
I am anxious to see how the 1 weight performs. I've never tried a 2 weight for gills. I might decide to trade in one of my 3 weights for a 2 weight and give it a try. By the way to trade fly rods in for another weight or brand I use Anglers Habitat----I have traded a couple of fly rods with them, I did have pay some boot, but it was worth the trade and cheaper than buying a new fly rod. Thanks for the comment

Where did you get your anchor bracket for your small boat detailed in picture from 02/07/11? Thank you. I have been following your blog for a couple of years. I thoroughly enjoy following along in your adventures. Thank you for sharing and your time.
James

Hi J
J that type lock anchor mate has been discontinued, I brought it at Cabelas years ago. You can still buy a lift and lock anchor mate at a number of shopping goods outlets. Check out link below for different types.
https://www.google.com/?gws_rd=ssl#q=lift+and+lock+anchor+control+pulley+for+boats

Thanks for following Fishing Through Life over the years