Fishing a Fertilized Lake can be a Challenge

I was back on  last week to see if the bluegills have started their spawn? I arrived later in the day and saw numerous boat and bank fishermen scattered around the lake. The lake itself had been fertilized four days earlier so the fish should be a little more active. The fertilize can cause the fish to become somewhat dormant two or three days after the fertilization. I started my journey on the east side of the lake to avoid the bank fishermen who had the west side well occupied.

I had tied on a white Bar Nunn popper using my 4 weight 8 ½ ft. Redington. The white and light chartreuse have always been a great early spring popper for me on this lake. The long rubber legs on these poppers drive the bluegill nuts. I was fishing closer to the bank today because the fertilize had turned the water cloudy. 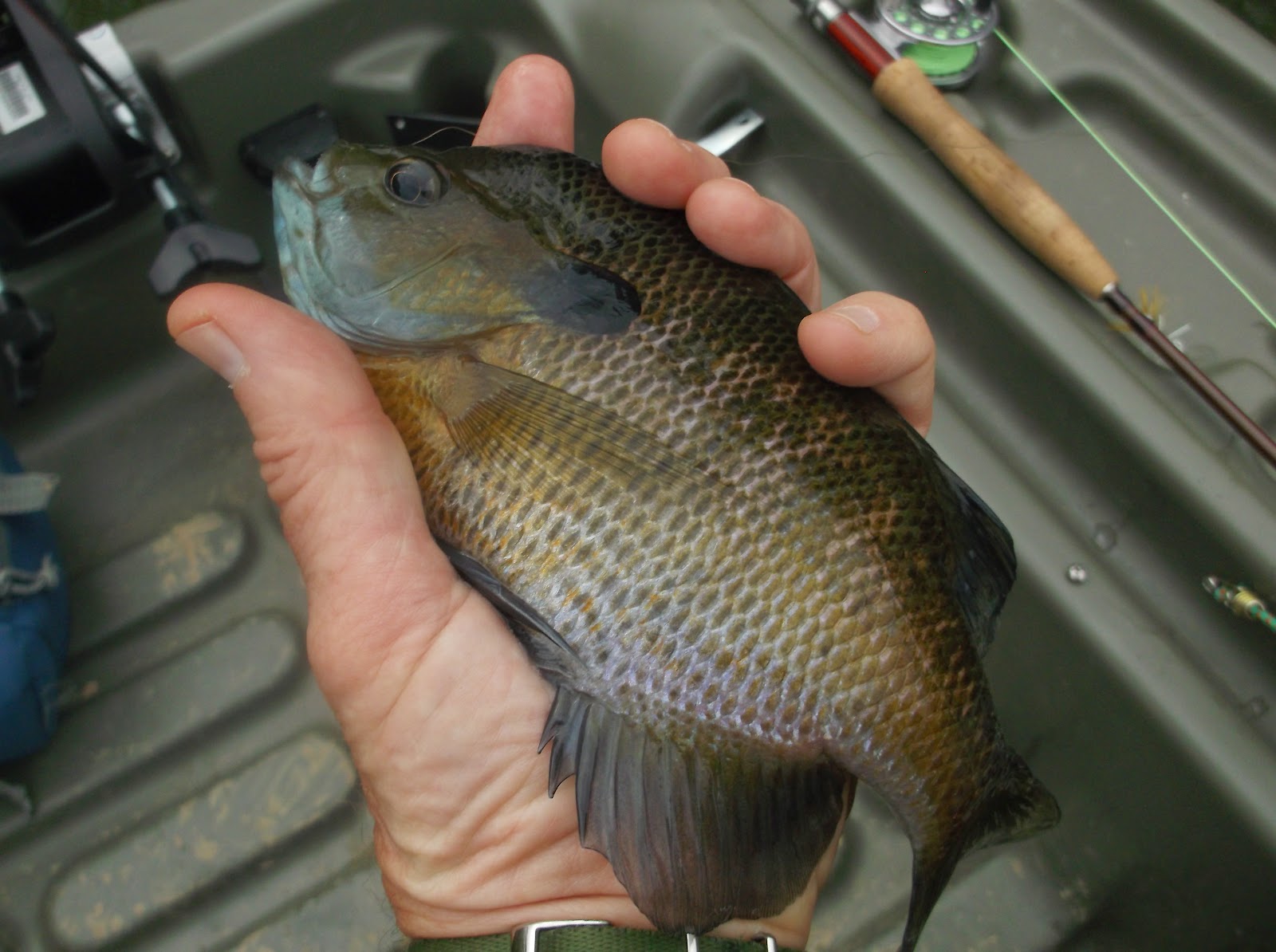 My first of the day on the white Bar Nunn put a bend in the 4 weight. This one will become a counter. 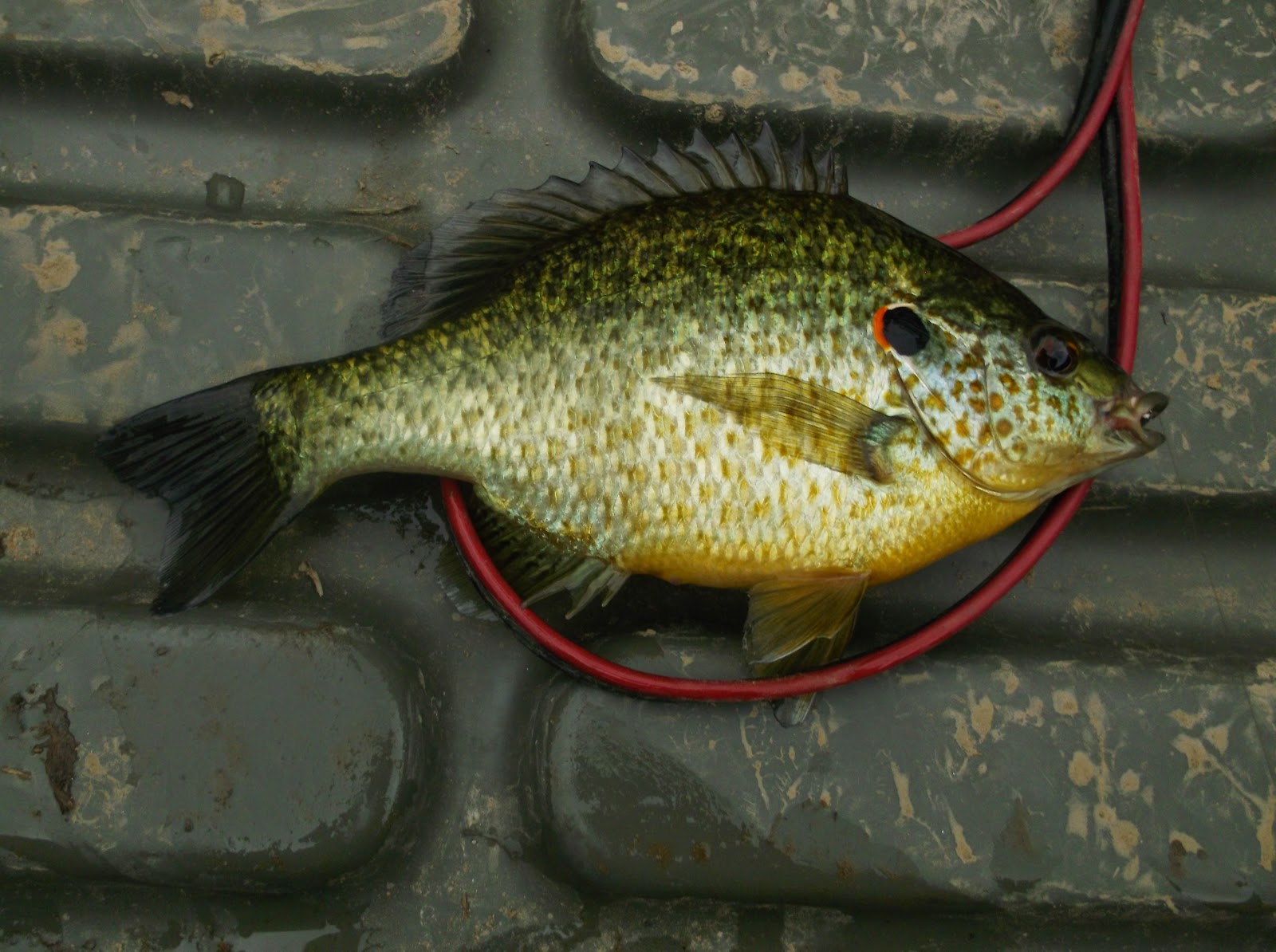 Nice Shellcracker on the light Chartreuse Bar Nunn popper; if you want a fight on the fly rod land a Shellcracker!!! 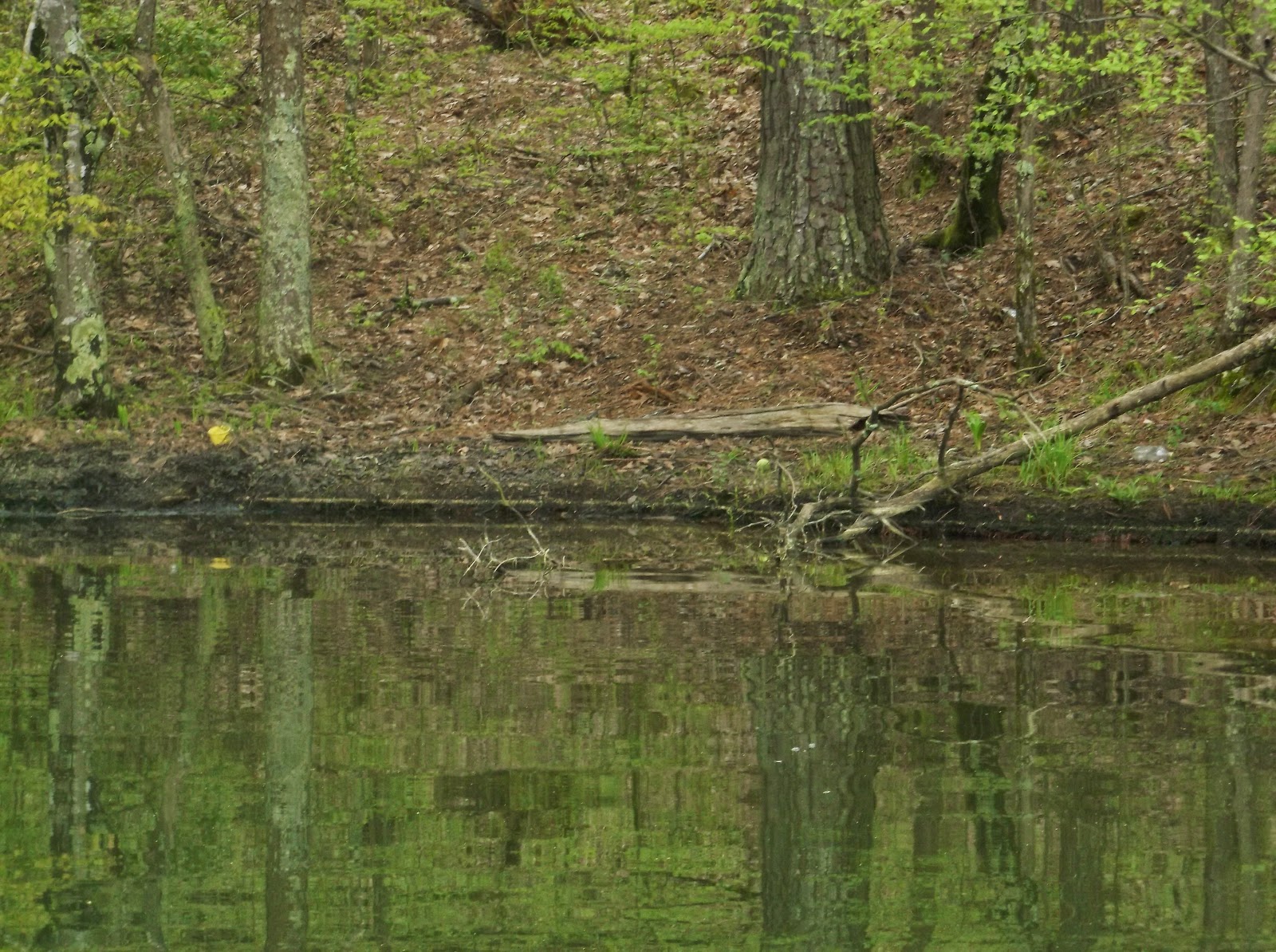 Hey Bill, that's some nice looking water. Excuse my ignorance, but what is a shellcracker? Your boat looks really fun, I wonder if I can talk the home general into scouting one out?

I don't know much about fertilized lakes, but I know you must have fun with those poppers and bluegills-- I'll look forward to some lake and pond fishing with them later this year. Thanks for sharing these moments on the lake!

Bill I like that Pelican.
I'll bet the grand kids do also.

What are they fertilizing? I though excess nutrients were a big contributor to algaeal blooms

I've always struggled on lakes that have just been treated. Good to see you grabbing some nice ones right afterwards!

Good view of the boat. Looks stable. How does it manage wind?

Howard
The Redear is called a Shellcracker in the deep south. I don't know where the name came from. Thanks for the comment

Walt
I only have a short time to fish the poppers on this lake, because of the bait fishermen, who clean all the beds out in days. I cherish those days I connect with the big bulls spawning there. Thanks for the comment

Alan
My oldest Grandson Bryson, will get to fish out of the boat for the first time this year. Thanks for the comment

1st time I heard redear's called shellcrackers was when I lived in South Carolina. In Louisiana they are called, Chinquapins or "pins".

Mark
All that you mentioned in the comment is true, but the fertilize turns the water so cloudy that the fish can't see the popper for some days. So that is why I always wait four to five days after the fertilizing to fish the lake. True the fertilize helps with more food for the fish and it helps to keep the moss down in the lake. Thanks for the comment

Brook
I don't like to fish lake that have been fertilized in the early spring. I wish the fertilize started in the summer months after the spawn is over. Thanks for the comment

Mel
So impressed with the Pelican, mainly because it is so easy to handle and fish from. The rudder keeps it straight when the wind is kicking up. Thanks for the comment

Drew
I have heard them called Chinquapins or "pins and of course Shellcrackers. Either name for this fish will get you an awesome fight on the fly rod. thanks for the comment

I forgot to ask the first time around Bill, Please explain why they fertilize lakes? A Westerner needs to understand.

Shellcrackers on the surface aren't too common... I've only landed one that way, and it was a long time ago. They call 'em "shellcrackers" because they love to eat aquatic snails. You should dissect a stomach on one sometime... I bet it will be full of snails!

Howard
Fertilize produces plackton, which in turn produces food for the fish, this is condense version as to why--the following is the full version----fertilizing increases the small, green, single-cell plants called phytoplankton (this is what gives your pond a green tint). Tiny insects called zooplankton eat the phytoplankton. These little insects are eaten by larger insects, which are eaten by bluegill. The bluegills are eaten by bass and BAM! You have a great fishing hole.The more food you produce from fertilization, the more fish you can grow.
I usually wait 4 to 5 days after they fertilize to fish the lake, mainly because the fish can't see the poppers in the cloudy water right after fertilizing, and too the fertilize tends to make the fish somewhat dormant.

Jay
I use to land lots of Shellcrackers on top with poppers in Mississippi years ago, when they were spawning. I even landed a few last year on Walker that were mixed in with the bluegills spawning. I didn't know they eat snails. I use to seen small bubbles coming to the surface in the lake I use to fish in Mississippi where I knew Shellcrackers were; so I am assuming the bubbles were created as the Shellcrackers nosed around on the bottom after snails. Thanks for the comment