My Best Day Ever Dry Fly Fishing on the Sipsey Tailrace

When I left the house today at I knew I was going to be nymph fishing at access five on the tailrace. I also thought I knew the generation schedule, but when I arrived at the parking lot I saw that the water was high. I don’t like to fish high water on the tailrace, but I was here so I thought I would make the best of the trip. 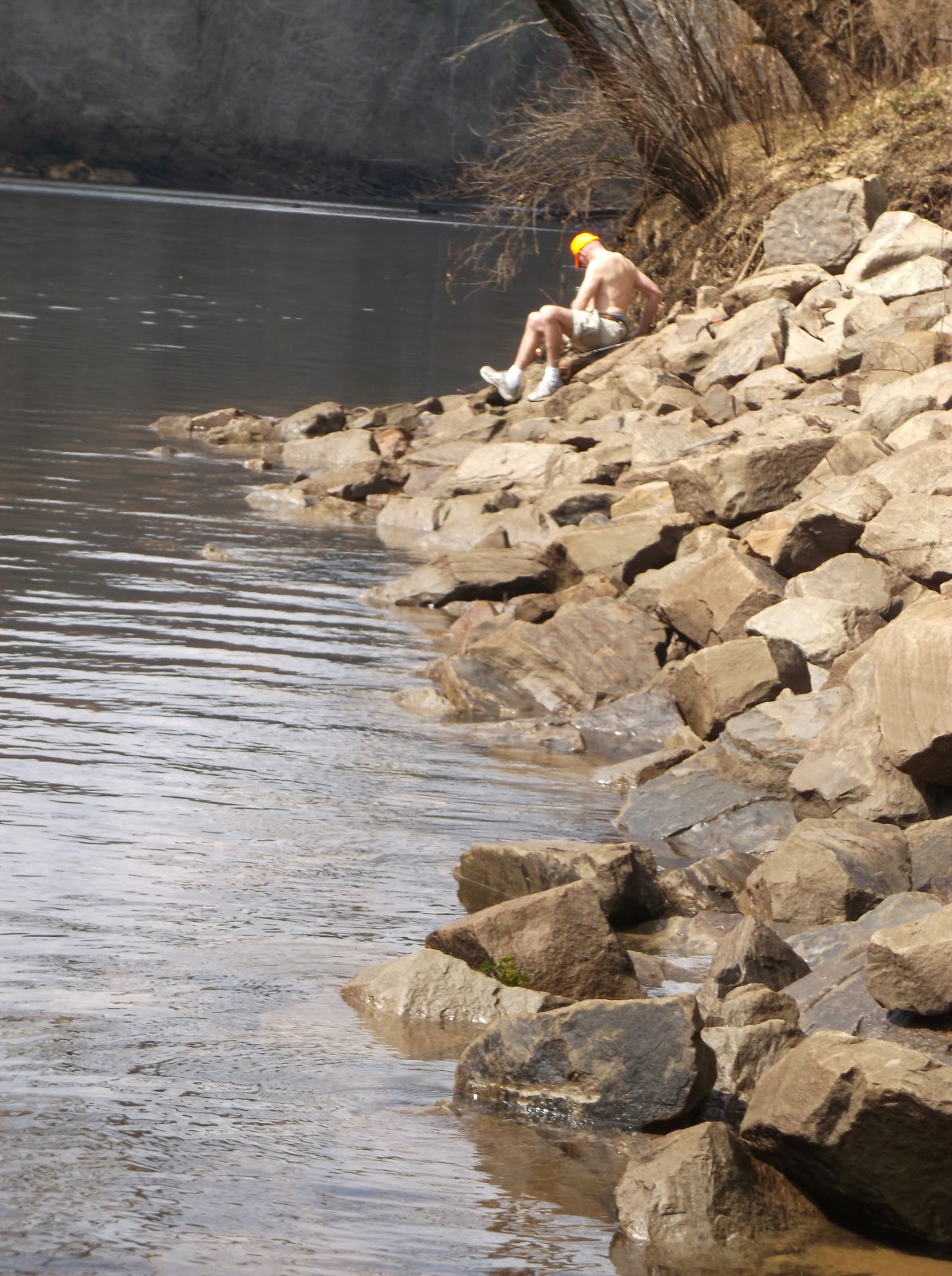 This area today was too deep to wade; it is usually a 10 ft. wide shallow wade through with plenty of room for backcasting. Notice the guy in the shorts, that tells you it was quite warm for March here today at 71. This guy had a buddy up the channel fishing the spin-cast. He and his buddy will play a role in today’s post as I fish through some of my favorite spots up the channel. 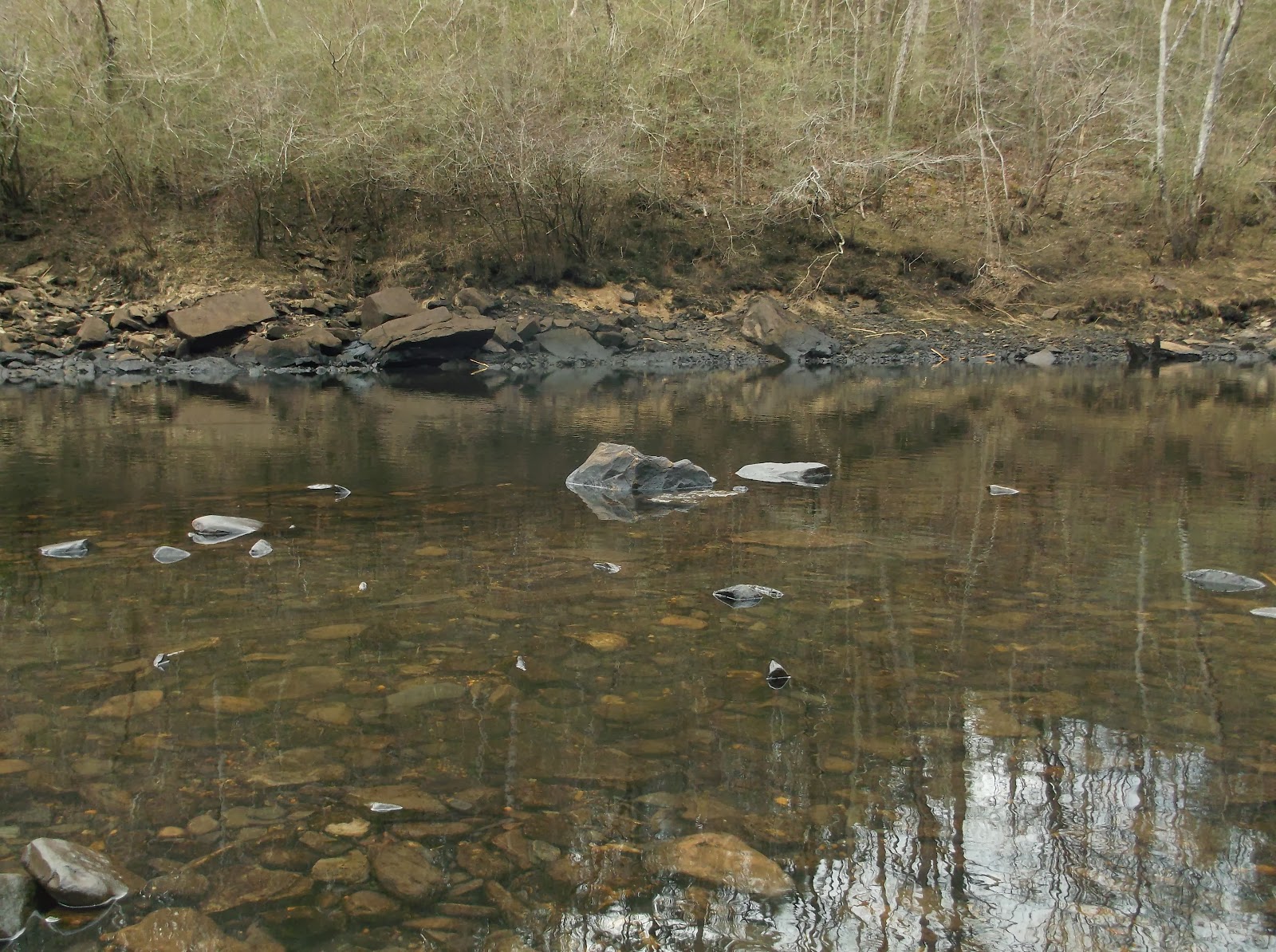 I was really surprised to find water I could wade at access six, and even more surprised to find a small hatch just above the water surface. If you look closer you can see some surface ripples in the deeper section of this stretch. As I waded to the huge rock boulder I kept looking to the right and left and discovered I was all by my lonesome. The surface activity causes me to change from my Prince Nymph to a 16 . 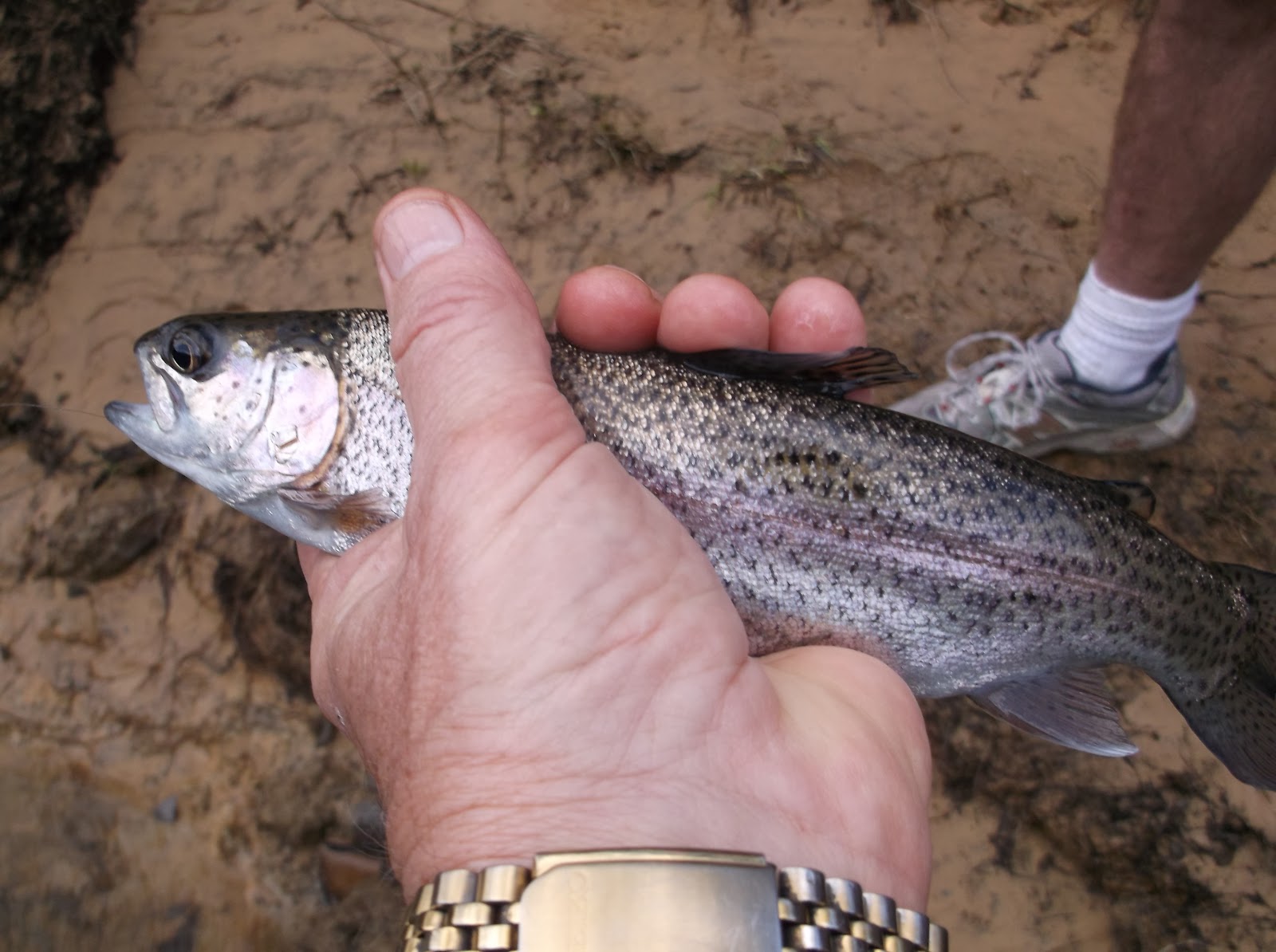 Many times fishing with flies is much better than with lures or bait. Nice move on your part letting those guys have a limit each. Probably made friends for life.

Congrats on a good day. I bet it was fun to land that many on dries.
So, is the #6 access the one closest to the dam? Are the accesses numbered from the order they are from the dam or the order on the road as you drive in?

What a day! You really can't beat a a hot top water bite. So, much fun to watch any fish explode on something you present to them on the surface!

You might have one or two days like that in several years of fishing. Glad you experienced one. I think it was a combo of not only the front coming but being there at the right time. The bugs might have been taking the opportunity to hatch with high water and the trout were just waiting. Is there a really a need to take a pic of every fish caught? I never really understood people that do that. It's like they don't think people will believe them or something.

Those are the days indeed! Man good stuff to be able to fish like that and have success like that. Good job man and thanks for sharing.

Mark
Both guys said they would be back with fly rods. Thanks for the comment

Jay
Very unusual to see that type of hatch on the Sipsey. All the access points are numbered from the road as you drive in. Let me know when you guys are coming and I will meet you there. Fun place to fish--

Justin
A fly fisherman's dream to see and experience that sort of thing. Thanks for the comment

Kevin
I may never see that happen again here, I was lucky. I think the approaching front was one of the major factors in the bite. Thanks for the comment

Al
I have to say I was blessed, and using the 3 wt. to land the trout was beyond words. Thanks for the comment

Bill - glad to hear you timed things just right and had memorable day on the water!

Mark
One that I will not forget for a long time. Thanks for the comment


That my friend is a day that will not be forgotten.
Well done.

Days like that definitely what get people hooked on fly fishing forever. Kinda like golf. You can be a horrible hack, but man, that one drive that goes straight and long...

That's why I don't play golf.

Bill, would you show me how to do that one of these days? Absolutely, a great day on the water, etched in memory.

Michael
Both guys that followed me to the area had never fly fished. Each said they were going to learn to use the fly rod and come back in a couple of weeks. Thanks for the comment

Mel
I was a very lucky fly fisherman Tuesday afternoon; I wish you had been there with me to experience an unbelievable hatch. Thanks for the comment

Trout in Alabama? Almost sounds like marlin in Montana. Seriously though, it's always good to catch a few. And a few more. OK, a few more too.

Lester
We are really blessed to have the opportunity to fish for trout here. It has taken a lot of hard work by Trout Unlimited and our local chapter to make this happen. Thanks for the comment

its nice to see that your fishing skills prevailed!

those guys probably left wondering how the hell you caught all those fish?

Blake
Just about anybody could have landed some of those trout, if they could cast a fly 15 to 20 ft. The trout were that brave to get that close to feed. In fact I saw some as close as 8 to 10 ft. from me, but I didn't land any of those. I don't think I will ever witness that can of hatch again in my lifetime. I was truly blessed that afternoon. Thanks for the comment

Great trip report! It's days like this that keep us going back. Thanks for sharing such an amazing time!

David
I don't think I will be that lucky again. It was truly an amazing afternoon of fishing. Thanks for the comment

Sooooo happy for you! A great day all around. Dry fly at its best...

Amazing day fishing BIll! Beautiful fish and I am glad you made the day for your new found fishin buddies! I am glad the high water didn't deter you!

crazy how the levels fluctuate so fast!

Luke
One wild afternoon for sure--thanks for the comment