In October I was fishing with what I will call a super nymph on ; when I discovered it made the difference in the slow morning I was experiencing. The surface action had long gone after the sun consumed the banks, so my next option was to go down under. I had tried a number of nymph patterns with no success, when I decided right before I was ready to call it a day to give the super nymph a try. On the second cast it produced a nice bluegill, which gave me confidence to stay a while longer. 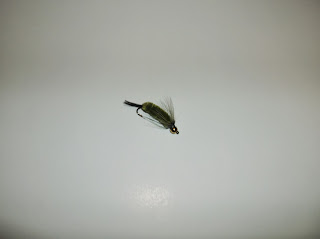 I like the Tungsten beadhead used on this nymph, because I can get a faster drop verses a traditional beadhead. This pattern continued to produce throughout the morning. 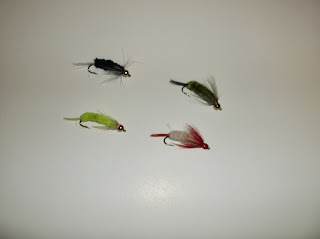 After having success with the olive pattern, I decided I would get David at the Trout Zone to tie me up some other colors. I wanted these to have a little more hackle at the neck and a different color tail to contrast with the body.  I haven't tried the other colors on the lake, but come spring I will have a report for you guys. As usual he did an excellent job in tying up the exact pattern for me. 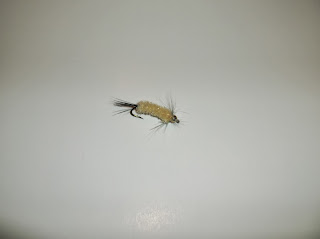 The cream grub is my favorite. I landed numerous rainbows on the tailrace some weeks back dead drifting this nymph in fast water. Sorry I don’t have any images of that trip because I forgot my memory card for my camera that day. I can see myself needing a lot of these cream grubs in my future, not only for the trout but for the monster gills on the lake. I don't know about you guys but I am ready for spring!!

Nice post, soft hackles are great flies for bluegills! I'll have to try the grub fly on the local fish. I too could really use a good day of fly fishing on a lake. You're lucky you have a tailrace nearby and decent temps to fish in. It's -11 here in MN, so there won't be any fly fishing for quite a while :(
Tight lines,
Conner

I'm ready for Spring too, except we haven't had winter yet.

Brothers
I have really become a fan of the soft hackle, especially for the bluegills on the lake. 11 degrees is a little out of my comfort zone. Thanks for the comment

Mark
I don't envy your weather out that way, give me the south in the winter. Mailed Howard a card today which had 20 task for him to do while in the hospital. One was for him to paint his toenails different colors--knowing Howard he just might try that. thanks for the comment

I'm just gonna take a guess here... that cream grub looks an awful lot like a hatchery trout food pellet... maybe that's why it works so well? I think we need to tie some good ol' fashioned pellet flies and give 'em a try down there. What do you think?

Jay
You may be right, because I have landed numbers of trout using the grub pattern and seal leech, dead drifting both flies in fast water. If you guys can come up the best days are Tues. and Thur. The weekends are crowded. Thanks for the comment

Bill! I look forward to your future posts and the success of the cream grub. Looks like a killer pattern.
Tightlines!

Al
I hope to give the cream grub a try this week. Really looking to some great post from you in 2014 as well--thanks for the comment

Bill those look to be very effective, and pretty simple as far as materials. The a very similar to a streamer I've tied.

The cream fly looks like a beetle grub in my opinion. All of those flies are just basic longer versions of a soft hackle. Which we all know are the best trout flies. =)

Bill, I am a little late to the party here on the Super Beadhead. I am with a few of the others here who have commented. Good looking flies, and, very simple to tie. These are the kind of flies I prefer to fish. That way if I lose one to a fish or leave one in the tree, no problem, they are quickly replaced. Happy Hook Ups in 2014. Hope one day to get a chance to fish with you.

Alan
Simply patterns are sometimes the most productive. Thanks for the comment

Kevin
I have found soft hackles not only works well with trout, but bluegills will nail them too. thanks for the comment

Mel
I will mention this now in this reply, but I have none of these flies anymore you see on this post, and much more of my fly fishing equipment--upcoming post will explain--thanks for the comment