The Moth or Muddler Either Pattern Will Produce Savage Hits 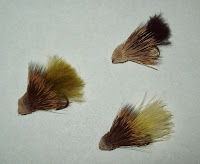 I came across one of my favorite early spring patterns this weekend, while selecting flies for my fly swap. It is the Muddler Minnow or what I like to call a glorified moth.  It seems each year I discover a new fly as most all of us do when fishing tends to get slow with your traditional fly patterns. I find the more I fly fish the more I like to experiment with other fly patterns. The pattern doesn’t have to match any hatch or be an insect the fish are hitting that particular time of day or year. It can simply be an attractor to get the attention of the fish. Like most flies the moth, which is what I will it, is that type of a pattern. It is that in your face fly that seems to drive fish nuts when nothing else will get a hit. I started fishing this pattern late last spring and into the July on and had tremendous success with it. My first intentions was to use it to land some monster bluegill in the gin clear water of Smith Lake, but I found out it was an awesome bass fly as well. The reactions from the spots in the lake were amazing. My next quest for this little jewel is the tailrace to see if I can get some rainbow interested. It would be an excellent fly to use in the fast ripples there. Floatant is a must when fishing this fly, because it possesses a big bushy body, which can soak up moisture fast in the form of getting water logged quickly. This fly is not hard to find it is in most fly shops and easily found on the net. The following image proves it worth!! 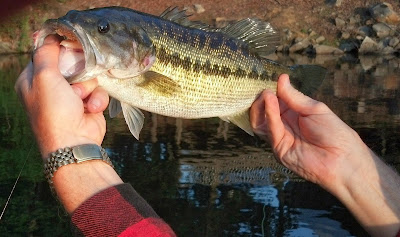 This beautiful spot inhaled the Moth on one of my early morning outings at early April this year. The action took place in the back of a nook area. I cast the fly right against the edge of some rocks, and  saw the wake before the fish ever took the fly, and knew I was in for a hit. This fish exploded on the fly and the fight was on. I landed it using my 9 ft. 5 wt. 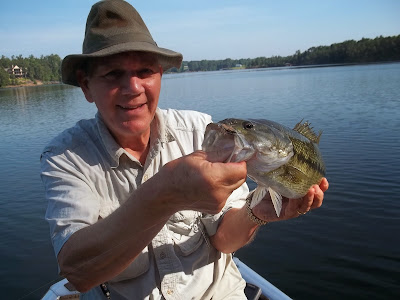 Another spot which was taken by the Moth last year in the first part of July. 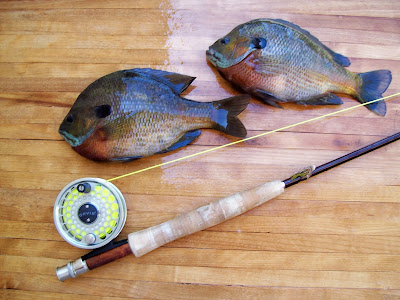 These two bull bluegills were the victim of the Moth. I landed numbers of bluegills from Smith and the smaller using the Moth. The 5 wt. was used to land both of these fish. 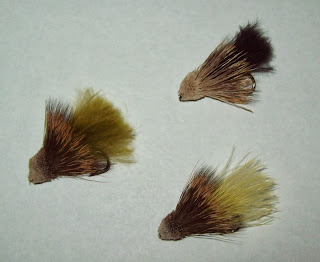 The muddler is a great looking fly. The last time I fish with one I waved goodbye as a large trout swam off with it.

I don't fish the fly often, only because I don't tie them myself. I am not the best fly tyer when attempting to spin deer hair heads. That being said, the Muddler or Moth is a great all around pattern and has been for years. They are not only fished Dry with floatant, but, are also a great streamer pattern when sunk down. Good to see big Bluegill and Bass like them, too!

The Muddler is still fished today, because it works.
Those are nicely tied.

Howard
I have found that this fly is an excellent attractor, either for bass, bluegill and now I know it will attract trout--as stated by your comment. Thanks for the comment

Mel
You have told me something I didn't know; I will have to give this fly a try as a streamer. Thanks for the comment

Alan
I have to give the trout a try with this fly. Thanks for the comment

The muddler is like anonymous creature.. just kidding nice photos i hope you will catch big ones. 6 PackUS Coast Guard License Training Alaska

A classic pattern with classic results..thanks for the reminder..

Pen
Yes this is a pattern that can be found most anywhere, but it doesn't get much attention. It is an awesome fly either for cold or warm water fishing. thanks for the comment

Bill, Love the incorporation of the marabou in the muddler pattern. Sure the bass can not resist it! Nice fish buddy! Great post!

Noco
I just wonder if you could entice the trout out that way to jump on the Moth or Muddler? I would never be able to tie this fly establish the head section. Thanks for the comment

Nice post, Bill!
I'm not entirely comfortable tying deer hair heads on patterns, but I've been making myself tie them now and again anyway. I'm improving. The nice thing about the Muddler is that, in its original incarnation, the head wasn't densely packed, because it was desired to sink. I believe it was designed as a sculpin imitation. I caught the only Steelhead I've ever caught (12 lbs) on a store-bought Muddler pattern.
The Marabou Muddler seems especially effective for many species, including Smallmouth Bass. Another variation is something with the Muddler head, and back-end of a Woolly Bugger. Its called the Bow River Bugger. They can be weighted or unweighted.

Dave
I will give the other variations a look. I have got to give muddler a try for trout. thanks for the comment

The flies you have pictured are Marabou Muddlers... which have a whole lot more action than the original pattern. Now you may think it looks like a moth, but I think the fish look at it as a wounded baitfish. It has been one of my favorite patterns for all species in rivers. I've had less luck with it in still water, but as you've shown it works just about anywhere.

Jay
The spots on Smith hit this fly after the daylight hours. I usually go with it after the sun comes up. The early morning fly is the big size 4 Boogle Bug. If the water is clam and smooth it makes the possibility of a hit even better. Wal-Mart does not sell this pattern anymore. It sell the streamer type Muddler now. I will meet you guys on the tailrace when you find the time. Good hearing from you