One of my Better Trips on The Sipsey Tailrace 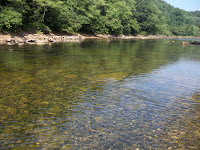 I have been waiting for a chance to fish the tailrace below Smith Dam for some rainbow. According to our local Fly Shop Thursday is the best day to wet a fly so Thursday it was. First off before I begin the fishing post I have to explain why it’s been so long since I fished the tailrace. Alabama Power has been working on seven access areas at different intervals along a stretch. They have been pouring pilings that will hold all the concrete steps in place at each access point, so the constant flow has been stopped, making it a still water situation when trying to fish for the trout. This has been the trend for the past year. So when there is an opening and water is moving then everybody flocks to the tailrace including me. So as I said Thursday was my day, I arrived at the Pump Station around and was really surprised to see no vehicles. So immediately I thought the flow was zero or word had spread the trout had lockjaw. Not to be discouraged I suited up and tie on size 18 Gnat. I really like this dry because to me it is the equal to the Parachute Adams. Both of these flies are the dries I go to when in doubt about the hatch. As I approached the water I was right no hatch and very little takes on top. The water was moving and to my surprise, I had the entire tailrace to myself. I moved no more than . from the access point and starting casting the Gnat. I thought I would get some takes but after half-hour of fishing the Gant and ending with the PA, I give up on the dries. I decided to go with a bead head Zebra Midge size 18.  While still standing in the same area I made a . cast in a small run, did one mend and the indicator went under. I promptly landed an rainbow. I really got a good fight from the bow with my 7 ½ ft. 3 wt. I continued working in the same area with the Midge and watching the indicator ever so carefully. Sometimes the take would occur with just a tiny movement of the indicator. As I stood there watching the indicator intently for takes I remembered a statement the River Damsel made in a  post on indicator/nymph fishing some weeks ago. She said when in doubt assume it is a fish, even if you set the hook on the bottom sometimes. As the morning wound down I manage to land the most trout I have ever landed on our local tailrace using RD's simple nymph rule. Thanks to River Damsel for teaching me a lesson I won't soon forget. 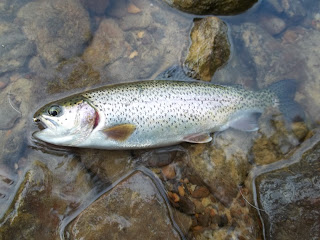 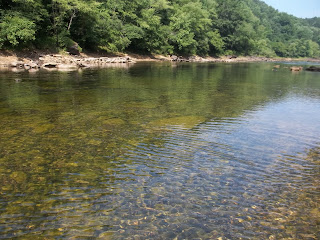 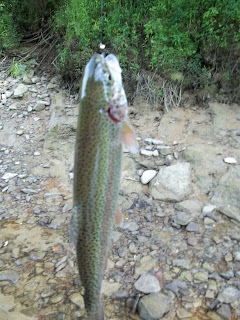 Kind of off the wall image here but I was in a hurry to get the midge back in the water--this was one of my better trout of the day pushing the 12" mark. I ended the trip with a count of 15 or 16 which was by far the best day ever on the Sipsey Tailrace for me. 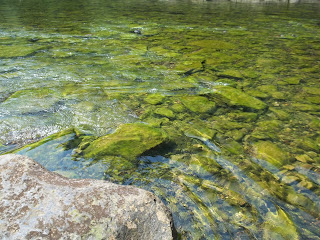 Right below the access point---I feel I learn something on every fishing trip and today was no exception, can't wait for next Thursday's trip
Posted by Bill Trussell at Sunday, June 10, 2012

I like Thursdays too. The fish have had a chance to rest from the weekend onslaught. For me Wednesdays a good too. Nice creek.

Congrats on the great day!! I love days like that, though it's pretty rare that I get that with rainbows (not too many around these parts)

Mark
Tuesday and Thursday are the best days on the lake here, and I just found out that Thursday is the best on the tailrace. Thanks for te comment

Brook
We are so lucky to have a trout tailrace like this in the state of Alabama---in fact this is the only place in Alabama to fish for trout and the best part is I live within 25 minutes of it. Thanks for the comment

Bill, I don't remember a trout post in awhile. Good for you for getting out. Nice chunky bows.

Ty
The Zebra Midge is my favorite of all the Midge patterns. Thanks for the comment

Howard
I hope to fish the tailrace more since the access points will be finished in a couple of weeks. Thanks for the comment

Bill, I am late getting over here to read about your fine day of indicator nymph fishing. As you know, been keeping an eye on the fire out our way. Sure was pretty water, and, the River Damsel was right on with her advice on nymphing.

Mel
Stay safe out that way and keep all of us posted on the situation. Really advice from RD about the nymph/indicator. Thanks for the comment

just keep setting that hook! Looks like a great day on the water. Fun when it all comes together.

Sanders
I had to pat myself on the back after today's trip---the best I have ever worked the nymph/indicator setup. I am headed out tomorrow to try it again. Thanks for the comment

Sounds like a good day of fishing! Great looking creek!