Making the Case for a Wading Staff 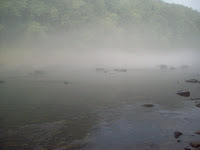 As I looked out across the misty covered waters of the Saturday morning with my son-in-law, something told me it was going to be a good outing.  I was right because my son-in-law had landed 6 rainbows in the first hour. I had landed one nice bow on the 3 wt. Why was I trailing, well my son-in-law was standing in front of a honey hole where the trout was feeding in a run on what we call tiny gnats, that was floating leisurely by. The ticket was the number 16 gnat, which I had success on the past week. So I would say the morning was eventful to say the least, notice I used the word eventful, because it was for me. I experienced what I have read about when someone slips and losses their footing while wading. That happened to me about two hours into the trip and it ended the trip for my son-in-law and me after I made it to the bank. I learned a valuable lesson in that I will never wade in water again waist deep trying to keep my balance without a wading staff. I knew better to try the wade I did but I wanted to get to those trout rising on the far bank from me, and I paid dearly for it. After peeling off the waders I discovered I had as much as a quart of water in the foot sections of my waders. When you slip once and go down, there is always a possibility you go down again, and again, and that is exactly what happened to me. So with all that said, I am making the case for a wading staff in my hand the next time I am on the Sipsey. 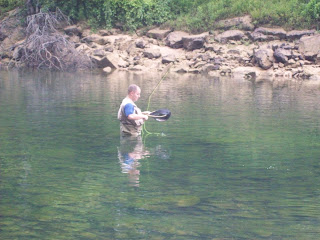 First one brought to the net for my son-in-law 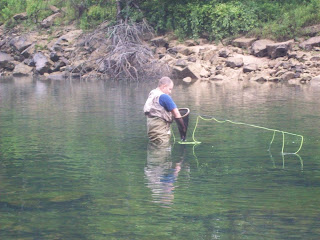 Yet another bow on the 4wt, really glad B.T. had a great morning on the Sipsey 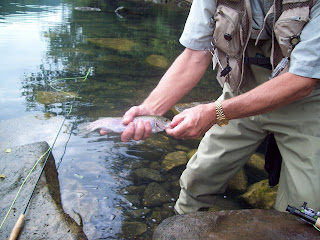 The only bow landed on the Padams, this was right before I took the dunk 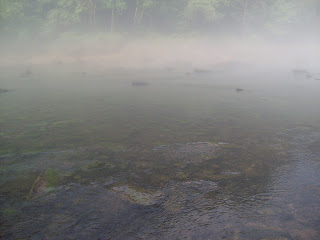 Still a beautiful place to fish even with the fog
Posted by Bill Trussell at Sunday, July 17, 2011