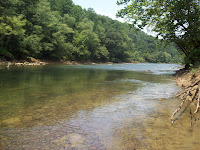 One of my fishing buddies and I made another trip below  this past Tuesday morning. We got on the water around , and didn’t have much luck with the dries we were using, mainly because there was a tremendous amount of fog on the surface and we could barely see our flies. There was some trout rising to what you like tiny gnats, so we began to tie on different patterns, starting with the old reliable Parachute Adams, down to a Mayfly, with no success. After a couple of hours of going through some those dries and using a pheasant tail, and Hares Ear with an indicator, we decided to move up stream and get into some moving water which was not quite as deep as where we had been fishing. The faster water had some great stems and some depth too, which made for a better situation as far as the dries were concerned.  I say that because there was some activity on top so tried to match the little gnats on the surface with a size 18 dry midge Dun pattern which prove to be the ticket for the mooring. We landed 8 nice rainbows in this one area all on the Dun Midge pattern. The takes at times were what I would  call soft and sipping, not as violet as last week, but neither one of us was complaining as long as we got to land some nice bows.  The good out of all of this is the catch of course, and the bad was we almost got caught in the river with the water rising on us to the point we had practically run to get out of the river. We both had looked at the Alabama Power website and there was no mention of generation at all on Tuesday, but to our surprise the horn sounded and we knew what that meant----get to higher ground and we did. I guess next time we will have to rely on a face to face conversation at the dam with an Alabama Power employee.
The difference in fishing the tailrace this year as opposed to last year is the access point that the power company has made for all the fishermen. Before the access point one had to wade through brush head high not to mention scaling down rock walls and getting out once you got the water was even worse. My hat is off to Alabama Power for the first of three access points that will be created on the tailrace. Another feature that has really improved the fishing is the constant flow of water as opposed to the so call stagnated areas that was evident in years pass. The only time water moved was when the generators were on last year, which was not a good situation for the trout that was stocked. With the constant flow one can dream or pretend he is fishing a stream out west, which at times is what the area reminds of now. There has been some quality trout landed this year, with some measuring . I haven’t tied into one that large yet but I will be working on it now that the area has changed for the betterment of the trout and the fisherman alike. Thanks to Brandon at Riverside Fly Shop for working with Alabama Power for making this a better place to fly fish for trout in Alabama. 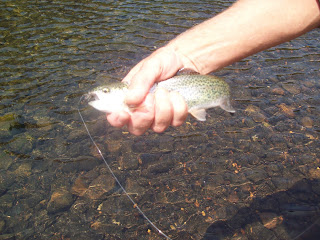 Sorry for the blur image, but my buddy has problems with the camera 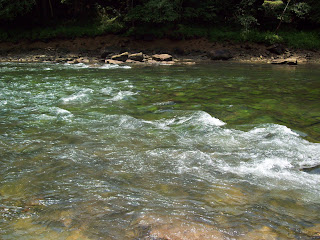 What the tailrace looks like when the generators are running, too much current to try and wade 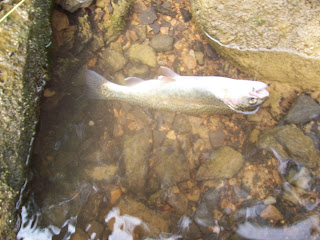 Nice bow, not good image of the trout, but just wanted you to see the quality compared to last year. Last year the trout would have been smaller. I can't say enough about the difference in this place compared to years past. In fact the area was so bad that I had stopped fishing the tailrace because of the water movement.
Posted by Bill Trussell at Sunday, July 10, 2011