Seperating Myself From the Rest of the Pack 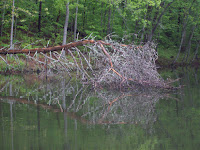 Today’s post is an update on my quest to reach my goal of landing 100 bluegills by the end of this month. I missed my trip on Thursday of this week because of the rain. I did get to go on Friday. I launched my little Raider boat at 7 AM and fish until lunch. The wind was a little more cooperative today compared to this past Tuesday. The only negative aspect of the trip today was the number of individuals on the water. It seems every nook, point, and bend I approached to fish, there was a boat. The positive aspect of the trip was the fact that I was the only one on the lake fishing with a fly rod. Everyone was either fishing live bait for bluegill or fishing for crappie with minnows or fishing for bass with artificial lures. I was really getting some strange looks; I had one individual to ask me, what kind of outfit was I fishing? I explained to him what I was doing but I don’t think he quite understood what I was talking about.

Today proved to me that if you are not following the norm by fishing the way everybody else does, then you should be a little more successful than the rest of the pack. That is what happened to me today. I stopped counting after I landed more than 30 bluegills. Of those 30 gills, 18 were keepers and 10 were the big bluegills I was after. The bedding process had begun because the water temps had reached 72 degrees. So this explains why all the boats on the water. I only have a couple more trips to make before it is over with on this lake for me this year. I hope I reach my goal. 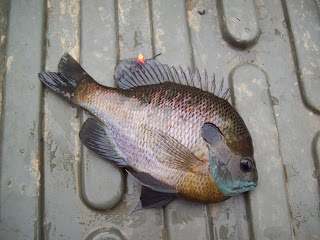 The little number 10 orange popper on the floor of the Raider boat was the choice popper today before the wind. It seems the bluegills were attracted to this color more than the traditional white, chartreuse, or yellow colors. 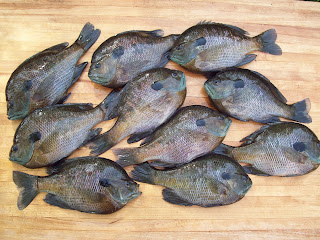 These are the best of the bunch. As stated in the post, I brought 18 home, but these were worthy of the picture. Half of these were landed using the Black Gnat after the wind got up. This group brought my total to 70.
﻿
Posted by Bill Trussell at Saturday, April 23, 2011

One more good trip out, Bill, and you should be able to meet your quota. I love it when Bluegill's are on the beds and you can entice them with top water bugs. Really nice Bluegill this time, too!

Congrats on getting closer to your goal. Top water rocks man! I cant wait for it to be in full swing out here.

Mel
I don't know if I will make the goal. When the bluegill begin to bed on this lake, the local fisherman show up including me. There are lots of boats taking lots of bluegill off the beds. Thanks for the comment

J & M
I agree, the top water action can be fantastic on anything from the fly to the Prop baits for bass---but for me the the fly is tops on my list. Thanks for the comment

Those are some nice bluegills. I'm kinda ashamed to say this but I never have had bluegill before even though I have caught them.
I guess I'm stuck on trout.

Rick
Good to hear from you. Bluegill are excellent table fare if you fillet them. Most people just cut their heads off and scale them and eat them whole. Filleting any fish removes the meat from the bones, and the bones is what make most warm water fish taste like fish smell. I know this sounds off the wall, but I have been doing this for a long time and found that the filleting makes the fish taste fantastic. Thanks for the comment

Sounds like you're well on your way to hit that milestone. Seems like you've got a winning formula going, hopefully they keep the activity up too.

Michael
It will be harder to reach my goal now that everyone else is fising the beds. I hope to make a couple more trips to make the mark. Thanks for the comment

One more good trip out should do it for you, Bill! Good luck reaching your goal!

Thanks Dave
Actually I am getting closer. Check back tomorrow for today's trip, which will bring me within reach of that 100 number. Thanks for the comment