I have spent the last few days finishing my blog to book project and have it ready to send to the printers. While working on this project I scanned through hundreds and hundreds of images that were used in all my posts I used for the past 11 years. Of course, the fish images always stand out, but the ones that really got my attention were the awesome rock formations that formed the rock walls on Smith Lake. The following images are some of my favorite walls that make fishing this beautiful lake so special aside from landing those fighting spotted bass! 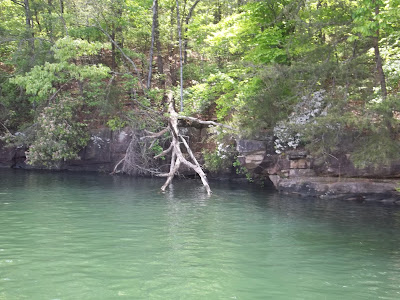 A hit could occur anywhere along this wall simply because of the shade. The prime area is the fallen tree. The closer you can place the popper to the prongs submerged in the water the better chance you have to get a hit. 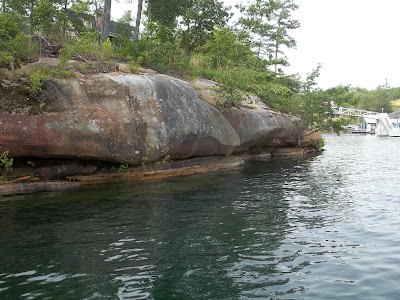 I have landed numbers of big bluegill off this wall, very few bass were taken here. I kept wondering why all the bluegills. Well with the lake down over 10 ft. last fall I discovered the reason for the bluegill; sandy bottom. Bluegill gathers on sandy bottoms, especially during spawning season. 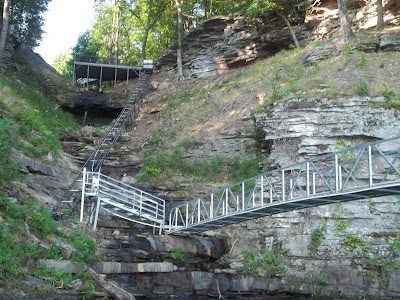 One would think with the air deck, monorail, and long ramp leading to a huge double floating boathouse and pier----these individuals would fish just a little. No such luck, they are leaving all the bluegill and spotted bass to the rest of us. I will gladly help them thin the fish species. 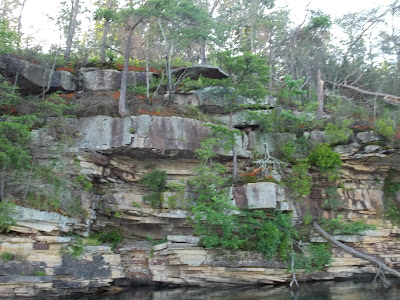 This wall is by far the most spectacular of all the rock walls I fish on this lake. I am amazed at how the trees grow and flourish in the cracks of the huge boulders. The fallen trees and hidden boulders submerged just below the surface are prime real estate for spotted bass and huge bluegills. This wall is loaded with submerged boulders. 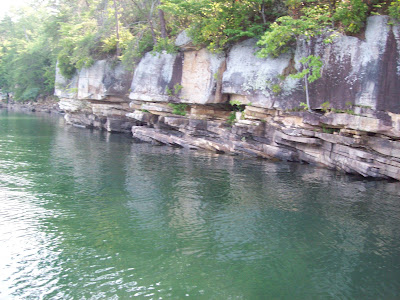 This wall is a favorite of the crappie fishermen on the lake, because of the amount of brush they have dropped along its base. The brush attracts huge bluegill and nice spots in the summer months. The shad gather around the brush early and late and a cream-colored popper or cream streamer will produce some savage hits. 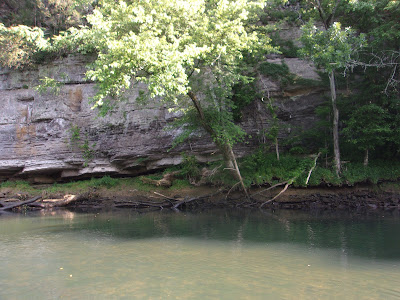 This is the shelf wall because at its base it has a unique feature that the rest doesn't have; a shallow shelf running along its base. Bass gather in the shallow edges at daylight to chase and gorge on the shad. Place a cream popper or cream streamer anywhere near the wall at daylight or late afternoon and watch it get taken!! 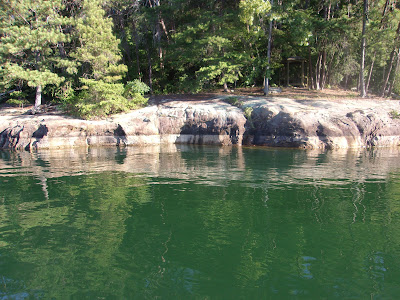 Low walls can produce fish as well as spectacular ones. In the case of this wall, most of it is located beneath the waterline. Twenty-five to forty feet depths is hidden off the edge of this particular wall. I have landed more bass on this wall as opposed to bluegill. 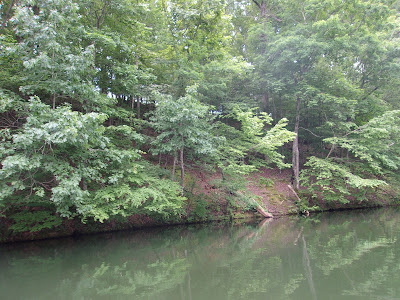 A prime area in the springtime. Place a tiny popper under the overhanging trees and expect a hit from bluegill. Areas like this are where the large bluegill select to spawn. Bluegill on Smith spawns in water 6 to 8 ft. deep in the super clear water. A good pair of polarized glasses will help locate the beds. 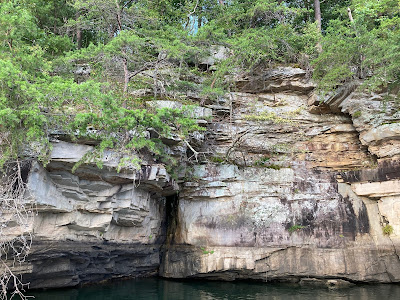 The closer one can place a fly in the split area on this wall the better chance you have to attract a take. I always have one fly rod rigged with a furled leader. The limp action of this leader, as opposed to the mono leader, make it easier to maneuver a fly or popper in the crack openings along this wall. Making a low side cast will place a popper under the wall overhangs. I've landed numerous bluegill and bass by letting the popper sit motionless under wall overhangs. As most of you know I like to make numerous runs up and down all the walls I fish on Smith. By making numerous runs you cover the area on the wall much better. In other words, each wall has fish moving in and out of its shadows all day; an endless supply of fish. 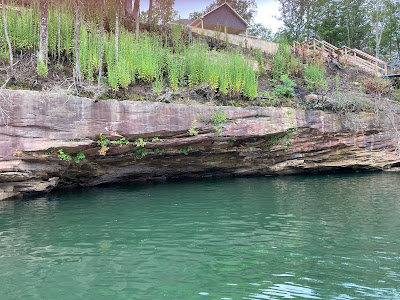 This overhang is one of the best I fish. Placing a muddler minnow or popper right against the back area of the overhang will produce. Patience is the key when fishing all the walls. Let the popper work its magic by letting it sit and get the attention of the fish before you ever move it. Overcast days are the most productive when fishing surface flies on Smith. Cloud cover hiding the sun enables me to fish the same walls two or three times during a trip. 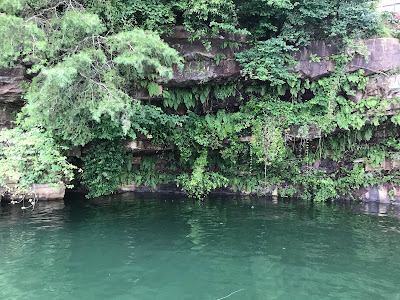 Some of the walls have nooks that will always produce fish. I wish I had some of this fern around my house. The moisture released in the cracks of this wall keeps the fern leafy and green all summer until frost. This area is another place that fly placement is so important. The closer you can get the popper or fly near the wall or under the overhanging limbs the better chance you have to land monster bluegill or spotted bass.
Smith Lake has the luxury of being one of the deepest lakes in the south. Standing timber was submerged when the lake was flooded, which is an excellent habitat for all the fish species that live in its waters. The heavy boat traffic helps to keep the lake well oxidized and the super clear water proves that it's one of the cleanest lakes in the south. Of all the lakes I've fished in my life, Smith has to be the most beautiful. Why go anywhere else to fish when one has a lake like Smith to fish?
Posted by Bill Trussell at Friday, December 04, 2020

Bill you see what I see and most don't see....There's more to it then then catching a fish.

Alan
You got that right, part of the fishing experience is the SCENERY along with the fishing!
Thanks for the comment

Like you said Bill, the scenery is awesome. Since NCT will be going away, I've started a project of copying and pasting the posts into a Word Document and then keeping them in a folder. At least I'll have them for posterity. From there who knows.

Mark
You've got a start with the word document folder. The blog to book project wasn't as time-consuming as I thought and the software is super easy to use. The tech support for this program is fantastic, they get back to you in an hour or less with an answer.
I'm counting the days until I can get back on Smith, which will be late March. I know you are looking forward to getting back on the water as well. Hope you guys have a Merry Xmas--thanks for the comment

Beautiful walls, Bill, the kind I can believe in. Have a great holiday season!

Walt
I've said this often about this fantastic lake as being the Most Beautiful Lake I've ever fished. I'm looking forward for the season to begin again in early March!! Thanks for the comment

Blog to book. Very nice. Thanks for sharing. Great photos. Somewhat reminds me of our local lake which used to be a Smallmouth river.

Josh
A new season begins for me in early March. The Spotted Bass and huge bluegills will be in the nooks and getting ready for the spawn---and ready to hit surface flies. I will do a post on the blog to book with pics in late January. Thanks for the comment