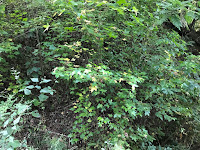 As I made my way down the steep steel steps and long ramp of access six I notice the leaves are already turning. By the way, it's easier going down than going back up. The dog days of summer are here and Fall will soon follow. As I get older the seasons seem to appear quicker now, causing me to squeeze in as much fishing time as I can. Wednesday was my squeeze day, to wade the crystal clear waters near access six on the Sip. 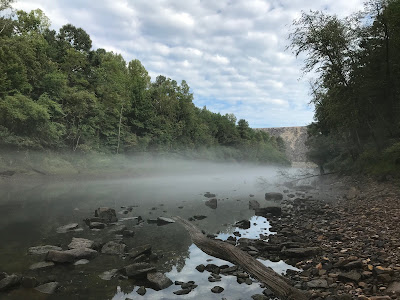 What I like about access six and seven aside from landing the trout there is the amount of shade both areas have on into the morning hours. Shade is the ally of the fly fisherman whether it's fishing warm water lakes or cold water streams. 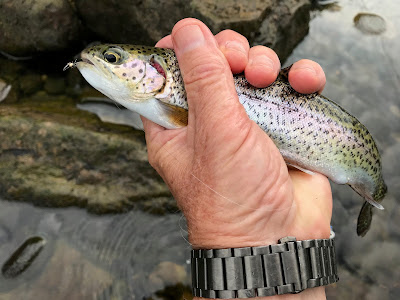 First connect after experimenting with different flies and techniques. No surface activity at all which cause me to work nymphs the three hours I was there. A fly Alan at Small Streams Reflections tied for me got the attention of this injured rainbow. I don't know what caused the cut on its gill plate but it didn't affect his fight. 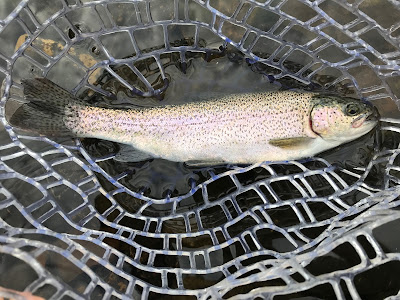 After the bite slowed with the indicator nymph, I switch to the dead drifting technique. I fish nymphs this way sometimes on this tailrace and the Caney in Tennessee. It's a simple way to present the fly giving the angler an advantage of adjusting the depth of the fly without using an indicator.


I was making long cast across the water column so I could work the nymph slowly letting it drift in the current. Watching the end of the fly line for the slightest movement let me know to set the hook. Sometimes the take can occur after the fly has drifted a short distance or as you retrieve it back as the fly line forms a half-moon sharp on the swing. Today I had a number of takes on the short distance drifts and as the fly approached the swing pattern and even as I retrieve the fly slowly back to me. Don't give up on your cast until you've worked the fly back to you within the length of the leader. I've had trout to take the nymph within eight or nine feet. There is mistaking the hit as you work it back against current. The dead drift is a fun way to fish most any nymph without the aid of an indicator. This rainbow nailed the nymph working it back against the current within ten feet of where I was standing. It was determined to have its way with the 3 weight, but after a number of runs it landed in the net. 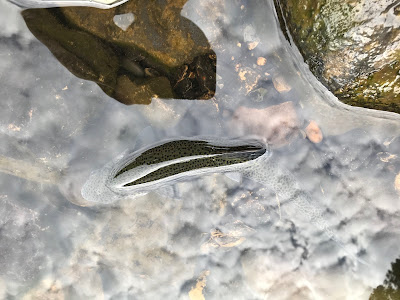 I ended today's trip where I started in the shade of access six and thinking how lucky I am to have another day to land trout below the dam of beautiful Smith Lake.

Bill, Pete is smiling down on you. It looks like your doing well in the way you work the BHPTSH. The fly is deadly.
I think that rainbow will be fine.

Alan
Just a few changes on a fly pattern can make a difference, and today the trout was impressed with that change. Thanks for tying it for me

Always fish the water near your feet... amazing how many fish get easily overlooked. I'm with you on the shade BTW, it's not only the fish's best friend, but the angler's too.

Michael
I seldom land fish in the sun fishing on top or fishing subsurface. Your last statement rings true when it comes to landing more fish. Thanks for the comment

Nice job fishing the dead-drift, Bill, and it's good to see that you're enjoying some late-summer casting in the home waters.

Walt
The dead drift is my backup when nothing else is working, which was the case Wednesday. Thanks for the comment