May be my Largest Bluegill Landed on Smith Lake 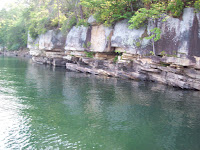 I was fishing with one of my fishing buddies this past Thursday. Cloudy skies, very little wind, and a heavy dose of humidity greeted us as we launched my new Pro 170 Bass Tracker. This is my fourth Bass Tracker I’ve purchased throughout my fishing career and will be my last. The boat is the perfect size to maneuver the small sloughs I fly fish on the lake. 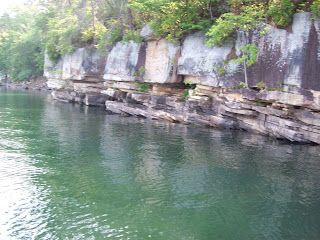 My first choice for today’s trip was the Sipsey Tailrace. I knew with the overcast skies the trout would be feeding on top, but Mike wanted to fish the lake for largemouth. We were fishing the back of some of the sloughs trying to locate spawning bluegills. It was a slow morning with both of us landing a few fish, me fishing my fly rod and Mike fishing his spin cast/combo. As we were leaving I decided to fish one of my favorite rock walls in . I knew big bluegill hang out near the edges of the walls in Smith after the spawn to feed on the small freshwater shrimp. 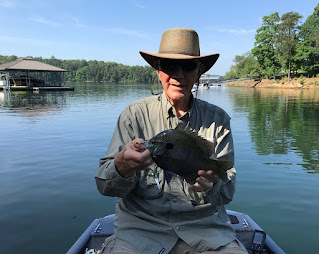 After landing a few small gills near the edges of the wall using the Barr Nunn popper; I connected with what I thought was good bluegill stationed inches away from the edge of the wall. The fish didn’t take the popper aggressively like the big bluegills I catch. It did swim fast to deep water as all the fish I land from the walls do, which caused me to take up the slackline at a feverish pace. After getting the fish on the reel the drag started to sing and then I knew this was a bigger fish and maybe not a bluegill but a big spot. After playing the fish and getting it within viewing distance in the super clear water I knew I had a supersize gill. As I lifted the bluegill in the boat I told Mike that he might be the largest bluegill I’d ever landed using the fly rod. The bluegill nailed the popper in water 30 ft. deep and made a run for freedom in water 55 ft. deep. I know this fish was not in the spawning mode, because of the depth he was in. No fish were kept today and that included my prize catch. I released him not only for his heroic fight but because of his size and colorful markings.
Posted by Bill Trussell at Sunday, May 27, 2018

Congratulations Bill, the smile and photo say all that needs to be said! And bravo for releasing that beautiful fish!

That is a prize fish! Congrats, and happy to see it got to swim away for another day.

Bill, that is one heck of a bluegill. And you didn't even have to hold it at arms length to make it look bigger!

Ralph
Agreed worth the count!! Thanks for the comment

Howard
One heroic fighter as stated in the post; wish his orange throat area would have shown in the image----once the bluegill comes in contact with the air the orange disappears-----he still had brilliant colors to show off his size. Thanks for the comment

Michael
A bluegill that size should be able to past his DNA along to other gills in the future. Thanks for the comment

Lester
Agreed no camera enlargement for this gill--my 4 weight got quite a workout handling this size gill. thanks for the comment

My goodness Bill, that is one heck of a bluegill.
Going that deep must have proved to be a fighter.
Well done.

Alan
I knew there was no danger the bluegill would get tangled in brush at 50 ft. or more, all I had to do was to hang on and enjoy the ride! Thanks for the comment

They don't always have to go into the pan to be a record catch. He'll be there the next time.

Mark
I hope whoever lands him next will give the fish his freedom. Hope you are improving and will be back on the water soon. Thanks for the comment

I don't know if I've ever seen a bluegill that large before, either in photos or in real life. What a catch! Glad you guys had a great outing on the water.

Walt
One sometimes thinks they will never land another fish as large as they previously landed, well I am an optimist. I think before I hang the fly rod up I just may get another bull that big. The reason I say that is Smith is noted for some large bluegill. Thanks for the commnet