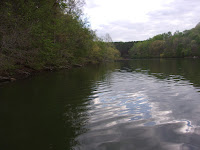 The near was my target lake this past Tuesday to explore. One drawback to this lake is no grass area to slide the Pelican into the water. Lots of concrete including the launch ramp; lucky for me there were a lot of fishermen there to help me get it launched. The polyurethane material this boat is made of will not take concrete slides often.


This is a 75-acre lake nestled in a deep wide valley with a huge dam holding back a flood of water. After getting on the water I counted 16 other boats scattered around the banks. I found out really quick that the majority of fishermen were fishing for the spawning bluegill. The big difference between me and them was the fishing technique. Again I was the only one using the fly rod, while the rest were using the crickets and worms. The live bait fishermen were landing lots of bluegill and catfish. I did manage to find one small spawning group of gills located near the base of some small maple trees that were willing to give the 3 weight a workout. Bluegill will sometimes spawn in very unlikely places and this group was located under the overhanging branches of the trees; presenting a bait of any kind was a challenge for any angler. Using a low side cast help me connect with the fish. I counted four orange corks tangled in the branches that didn’t make the connection. 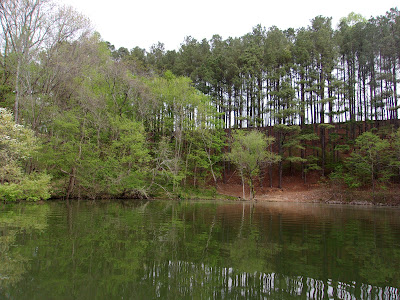 I landed a couple of small bass holding in the back of this nook. Other boats were waiting in the wings to give the area a try. 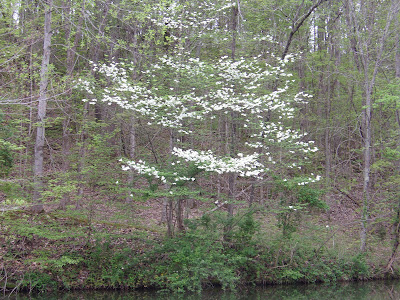 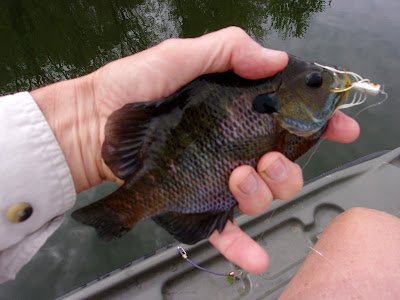 I worked hard to land this bluegill from under the maple branches. In fact, I was impressed with my placement of the popper to attract a strike. Time after time the Bar Nunn popper hit its mark to hook up with this group of spawning bluegills. This is a good bull bluegill, but I’m still looking for the really big gills. I hope I can land a few before the spawning season is over.
Posted by Bill Trussell at Monday, April 17, 2017

Nice work, Bill, on the ones you tracked down. It is going to take you some time on new water to get the big ones hunted..... Completely understand and looking forward to reading more of your efforts with the Bluegills and Crappie for that matter.

How different the South and the West are. A blooming Dogwood means at least one more snow.

Bill great to see you out fishing. It's nice when others are willing to give a hand.
Nice bluegill.

Mark
Jason said he's found out there are a lot of things different from the south and west, some good and some not so good. Thanks for the comment

Alan
I've found that I have a lot of company to help with the boat and fishing as well. Thanks for the comment

Howard
No quest this year, I will have enough trouble just landing average size bluegills fishing from the new waters. Thanks for the comment

A nice new pond you've got there, Bill, and surely it's a fun place to land bluegills on!

Walt
Have to admit it was a little crowded with 16 other boats on the water! Thanks for the comment