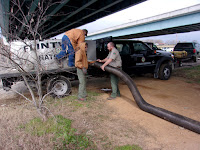 Fishing McCutcheon Creek near our home in Spring Hill last week brought back memories of fishing some of the warm water streams in years ago as a boy. Those early years found me using a cane pole and worms landing sunfish and catfish in a lot of the streams I fished there. Last week I was armed with my 3 weight Redington; ready to land a few stocker rainbows. I notice I was the only one using a fly rod. There were a lot of eager fishermen waiting with a spinning rod and reel ready to “clean plow” fishing the small stream. The majority of the 150 trout that were stocked on that Friday were all caught and taken home for a meal by the fishermen at the end of the day. 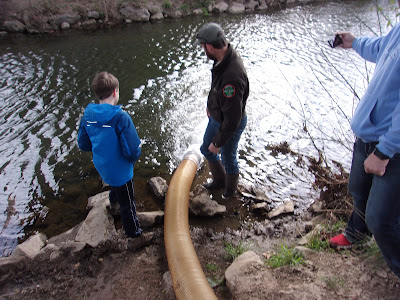 The trout were released in 2 to 3 ft. depths 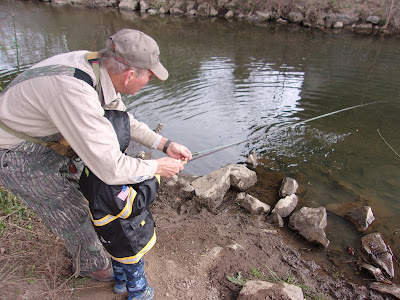 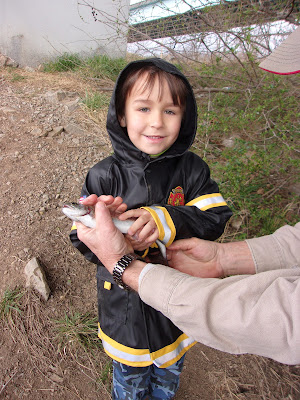 Colton with his first rainbow on the fly rod---congrats Colton on a job well done!! 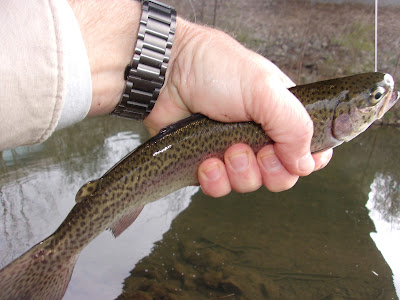 Colton help me land numbers of rainbow this size, all were release for other kids to enjoy 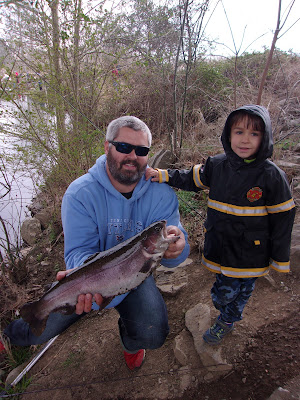 Colton with his Dad Wesley after they landed this huge rainbow using the spinning reel and a crappie nibblet as bait. Colton's dad told me he had never fished for trout before. We watched it swim away after a hero shot.
Ken, the Hatchery director told me when they arrived that he bought 10 of these big fish for the young kids to land. What made me really sick was seeing 4 of these big trout in metal nets dead caught by adults. A lot of metal nets were filled with trout before I left for lunch. The practice of catch and release was not in place on this day!!! 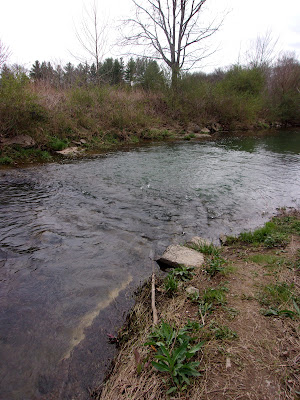 Thanks, Bill, for sharing this post. Great to see both Dad and grandson catching some fish. Passing along your support of catch and release fishing, even in this little piece of stocked water is admirable. May others enjoy your passion!

Mel
It was fun for the younger crowd while it lasted on Friday; hard to watch so many trout from the little stream. Thanks for the comment

I love the look on your grandson's face, they do enjoy catching fish.
That last bow is huge.

Colton catching his first trout on a fly rod...priceless. Sounds like some adults need to learn a little about catch and release for the sake of the kids Bill. Thanks for sharing such a great experience.

Alan
I wish Bryson, my grandson had been there to enjoy landing some trout like Colton was doing.
Colton and his dad were close by when I started catching some of the trout, and I thought I would let Colton try to land a few on the fly rod---he enjoyed it!!! Thanks for the comment

Howard
The adults made short order of all the trout in one day---in fact none were thrown back for the kids to enjoy landing again. thanks for the comment

It's especially about the grandkids having a lot of fun, too. It's too bad that some of the adults didn't have the foresight to return those for other kids (and adults)to enjoy. Anyway, nice going there, Bill. And thanks for sharing!

Walt
I hope next year the message of catch and release will sink in more. thanks for the comment

While hearing about everyone loading up on trout is irritating, I do not believe that keeping one or two of the smaller midsize fish is a problem. So many catch and release fishermen have an either or view of fishing. Keeping a lot of fish is not always good, but neither is catch and release. Both have their uses and are perfectly acceptable as long as they are not overly exaggerated. To fill your cooler with a limit of a type of fish that is of a limited supply and clearly being enjoyed by others (especially by children) is inconsiderate. At the same time, there are many less experienced fishermen who are solely “catch and release” fishermen that take the time to learn the best ways to catch a lot of fish and/or bigger fish, but never learn how to properly handle a fish or to increase the chances of the fishes survival after release. They will use barbed hooks, handle a fish with dry hands, or keep it out of the water to long as they keep retrying their “hero shot.” How good is catch and release when half the fish someone catches dies afterwards? Also, if you catch a fish that is an invasive species and just release it like every other, you are hurting things, not helping them. Like I said though, this does not include those who are more experienced. Hunting and fishing serve three purposes; food collection, fun, and conservation. Fishing used to be comprised of people going out to catch a limit to put food on the table, and now it is mostly viewed as a sport. Anyone wanting to eat what they catch are instantly shunned and chastised by those that view fishing only as a sport. As someone studying to be a game warden, I need to talk about the conversation side. If fishing was purely supposed to be a catch and release “sport”(activity), then there would no longer be limits in place. Fishermen are allowed to take a certain number of fish home each day because this prevents overpopulation and creates a more balanced ecosystem. It is a good idea, however, to put fish that are too small or big back so that they can either continue to grow larger or breed more if they are particularly big. But the removal of some fish can help the ecosystem. Catch and release fishing is perfectly acceptable as well as long as it is done right. If someone that does this kills nearly half the fish that they catch though, it is a waste of life and meat. Keep in mind that no matter how careful and thorough you are with how you fish whether for fun or for food, you are hurting the fish. No matter where the fish ends up after you land them, they are worse off than they were before. Lastly, the stocking of trout in TN is done every year because there are very few areas in TN where trout can live year round and reproduce. Many of these creeks and rivers where TWRA stock trout are not suitable to support the trout for an extended period of time and do not provide the correct river or creek bed conditions for the trout eggs to actually survive. They are put there for the public to be able to catch them and even eat them if they like. If no fish were kept from these stocked locations, they would still eventually die out. As I said at the beginning, these adults should not have kept so many of these limited fish while there were so many others trying to enjoy catching them as well. Also, as smaller fish tend to taste better anyways, them taking 2/5ths of the larger fish that are more fun to catch was selfish. If they wanted to have some trout to eat, only keeping one or two fish of the fish they had caught would have been more considerate. Thank you for this post and the pictures of Colton enjoying this fine activity that brought a smile to my face. Also, today is a scheduled release date for that location if the weather doesn’t postpone it again, so I hope that you guys enjoy the fishing there again.

Hey there Bill,I'm new in Columbia, Tn and would like to get your thoughts on good fly fishing in local waters for spring 2018. I know we've have a lot of rain this year and the water levels don't seem to cooperate much with trout stocking schedules. Thanks, Terry W