Adding a Little Variety to The Fly Fishing Mix 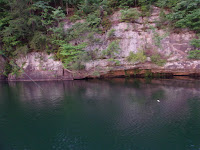 I have always been a fly fisherman who changes flies often if the bite is slow. On Wednesday I had a chance to put the fly flipping process into practice after the sun appeared. I was fishing Smith trying to improve on my bluegill quest for this season. Daylight is the best time to land all species of fish on Smith; after the sun comes up I start experimenting with different poppers sizes and colors. I guess the appearance of the sun on Smith is a signal to the better fish to go deep and wait for an unusual fly pattern to light on the surface to get their attention. 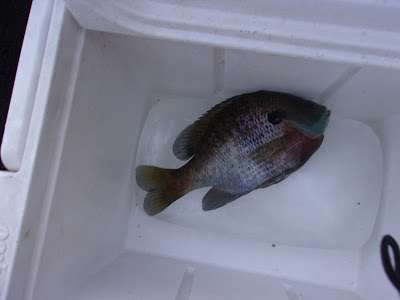 This bull is the first of the morning headed for the baking pan. Four fillets coming from this fish with the fixings are an awesome meal. He fell prey to the Bar Nunn popper which worked really well before the sun appeared. I landed this fish on my 5 weight which was the backup to my broken 4 weight. I hope to have the 4 back next week. 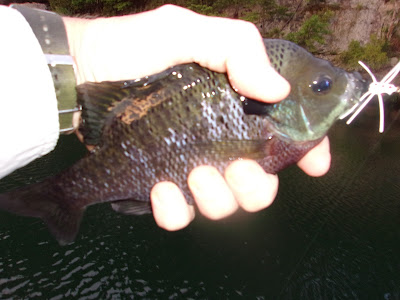 This early morning gill nailed the white Bar Nunn popper right before the sun appeared over the treetops. 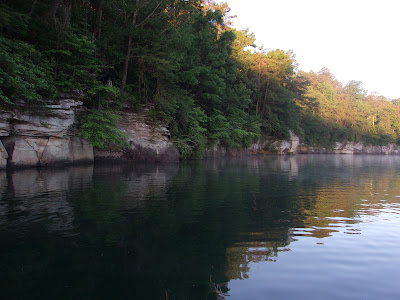 Where do the bluegills go after they spawn? Deepwater and the ones on Smith hang out around the rock walls such as those in the image above. They spend more time on the rock walls than they do on the spawning beds throughout the year. I have caught big bluegill that regurgitated small shrimp while landing them. Those shrimp are located in the cracks of the big rocks and boulders located on the rock walls. The freshwater shrimp is the magnet that draws the bluegill to the rocks.
In the the bluegill spawn occurs at least 5 times from April through August. The full moon is the indicator for the spawn for each month during a given year. The bluegills are most active four days before the full moon and four days after the full moon. They will eat anything that is placed near their spawning beds during those 8 to 10 days. Cold fronts will drive the fish off the beds during the early spring months, but they reappear after a few days of warm weather. Knowing the full moon phases is critical during the bluegill spawning time. The rock wall above is one of my favorite walls to fish when the spawn is inactive. 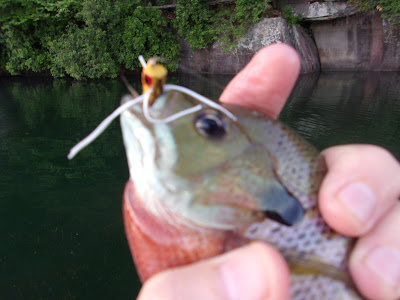 When the white popper faded, the yellow landed a few; patience is the key when fishing the walls, sometimes the popper would sit motionless for 15 to 20 seconds before a light hit occurred. 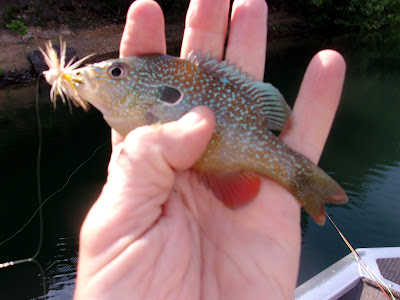 After the sun appears expect smaller gills, such as this colorful sunfish, that took the Muddler Moth; an obvious throwback to catch next year. 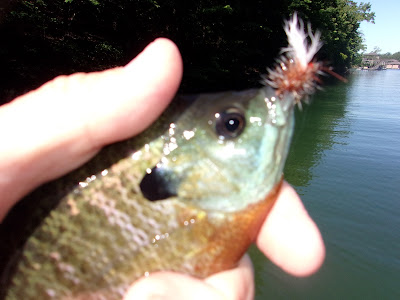 Alan’s dry was also in use, with the 3 weight as the casting tool. 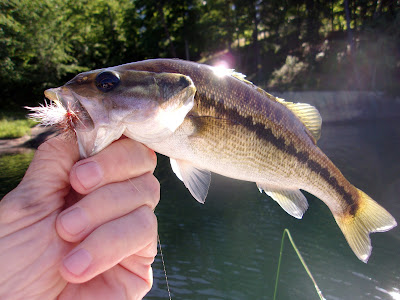 A few bass were hitting the dries as well as the bluegill. This spot put up quite a fight pulling against the 3 weight. Numerous dries and poppers were used this morning, some produced and others didn't work on this outing. Those that didn't work today may prove to be winners next time out. I didn't count any bluegill today for the quest. 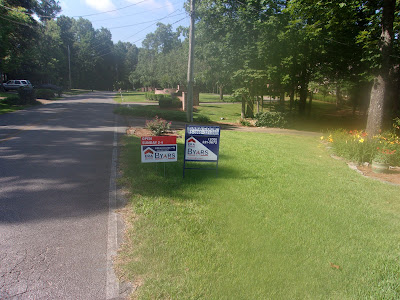 A Side Note: My wife and I put our house on the market last week with a local real-estate agency here in Jasper. We will be moving to Springhill as soon as it sells. Hopefully, it will sell before school starts on August 1st.
We want to be closer to our grandchildren and watch them grow up. They are at that fun age now of 7, 5, and 2. Our daughter and son-in-law have been wanting us to move closer to them for the past 3 years, so we have decided it is time; neither of us is getting any younger. I have already checked out the fishing spots in the area and there are many. The is near, which I intend to fish often over the coming years.
Posted by Bill Trussell at Sunday, June 12, 2016