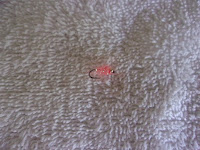 I wanted to fish the Sipsey yesterday before the rains that afternoon. Generation was scheduled at so that gave me about 3 hours to wet a fly. Never think especially on the Sipsey that you’re going to land trout on the same pattern day in and day out there; yesterday proved that statement correct. I went through numerous nymph patterns with no success. After exhausting my options I tied on an orange nymph Alan of Small Stream Reflections had mailed me sometime back. I kept trying to figure out what this pattern duplicated in the insect world while I was casting it. After I got home I googled orange nymphs and found the Milkweed Assassin Bug. Strange I didn’t see any such bug while I was fishing but this little orange nymph proved a winner today. 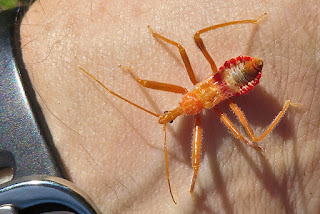 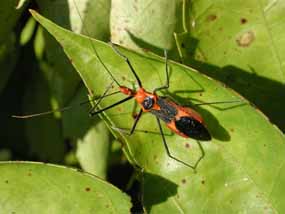 The Milkweed Bug and the Red Ant 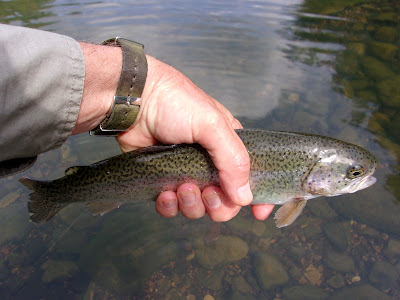 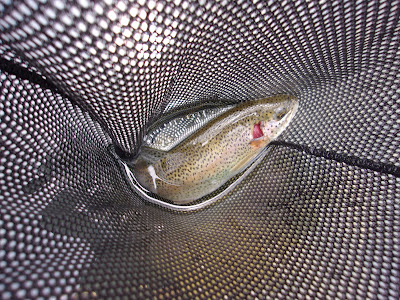 There must be a clan of these damaged gill plate trout in the Sipsey, or I am landing the same trout every time I fish this place. 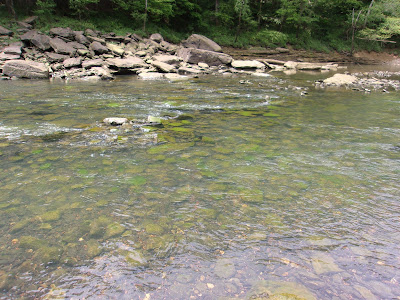 Super clear fast water pouring into small pockets held the trout below; the orange bug continued to work its magic. 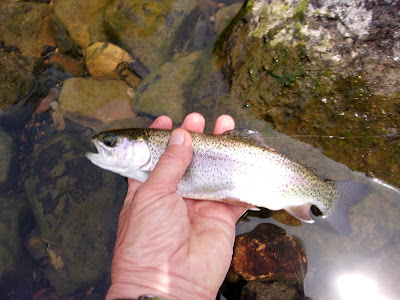 Never overlook any fly in the box; high sticking the little orange bug worked in the small pockets. Who knows what pattern will be hot on my next outing here.

Just goes back to the saying "Ya got to give them what they want that day" even if it is orange.

I hope you don't have an outbreak of gill lice in that river. I'd notify your local wildlife agency and include the pics. We have some NC waters that have lice and it's nasty. We're also dealing with Whirling Disease.

I'm starting to dig orange. I beginning to consider the philosophy that chartreuse works not because of its color but because of its vibrance. I've had really good luck with neon pink and bright orange lately. I'm wondering if the vibrant brightness is more important than the actual color. More experiments are needed.

It's my humble opinion worth exactly zilch, that when the fish aren't hitting the usual suspects, then it's time to pull out the stops. I keep several obnoxiously colored no-name flies for just such an occasion. I'd say judging from that fly and that fish that my theory holds water.

Beautiful water. Thanks for sharing.

Kevin
I guess in the trout world vivid bright colors attract. I am use to fishing colors in black, brown, grey which actually relate to the insect I am seeing while I am fishing. I do know those vivid bright colors work for bass; what kept puzzling me while I was fishing the orange nymph the other day was its relationship to what orange insect.
As for the gill lice I don't think any of the trout have contracted that disease here. I think something, such as the otter, which I've seen is attacking some of the trout and damaging the gills. I have seen scars on many of the trout's bodies which indicate to me something is trying to eat the trout. Thanks for the comment

Howard
Ha, if it catches fish us it, no matter what the color. Some of the guys who fish the Powerbait in those wild, pink, green, red, and yes orange colors catch trout, so yes an orange nymph works. Thanks for the comment

Ralph
The closet I can get to mountain streams and western fishing, I will take it. Thanks for the comment

Love your page, Bill. I am a beginner here in the Central MS area, and your posts have helped me land some of my first fish. ~Thanks

S_Goff
It's always good to hear from a fellow Mississippian. I was born and raised in Choctaw County, in the Chester Community. I grew up fishing the small streams as a boy with a cane pole and red worms. I'm still fairly close to my pole fishing using my 9 ft. fly rod as my pole now.
I help to recapture some of the small stream fishing later on in the summer off the Trace, so keep an eye out for those post. I will be videoing some of the segments. Glad I am able to get you started in this great sport a lot of us love. Thanks for the comment

Oh no Bill...a big run on orange flies.
One never knows what the trout likes.

Alan
Thanks for putting me on a winner, when you mailed this fly a while back; thanks for the comment

It doesn't imitate anything! I put it in the same class and the pink worm. Maybe fish just take it out of curiosity but that crazy thing does catch fish!

Go orange! I like it mixed with navy blue for the Denver Broncos. Well, that was last season. Maybe orange will still work on the river. ;)

Mark
As for color, same thing I guess could be said for bright green, which the trout on the Sipsey will take at times in the form of Powerbait. Thanks for the comment

Chris
Crazy colors for sure will sometimes get takes anywhere on streams, rivers, and tailraces. Thanks for the comment

Those are beautiful trout, especially their spots. I loved the crystal clear water you fished, and your bugs are inspiring to look for like species and tye up some new flies. Thanks for sharing.

Flyfish
The Sipsey is a beautiful place to fish for trout, I seldom fish the place in cloudy water. The beauty of the trout is just one of the things that draws me to trout fishing. Thanks for the comment