Prepping for my 2016 Bluegill Quest I spent most of the day Tuesday on trying to land some super size gills. The weather didn’t disappoint with sunny skies warm temps; the only downer was tremendous wind out of the south for the better part of the day. In fact, the wind was so strong I spent the majority of my time fishing up and down the levee where I could avoid the wind gust. 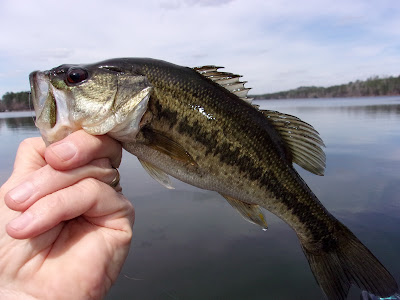 The levee had fish on it in the form of the native Red-Eyed Bass, and some nice bluegill that wouldn’t make the quest but provide some nice table fare. 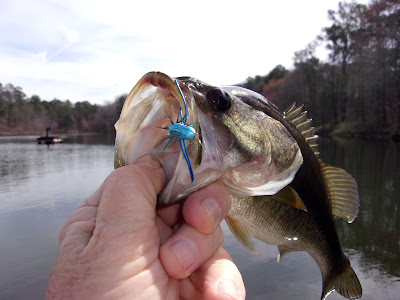 I was not surprised that there was activity on top in the 62-degree water because last year I landed Red Eye Bass here in 58-degree water. They nailed the Bullet Boogle Bug popper often throughout the day; a lot of fun on the 4 weight. 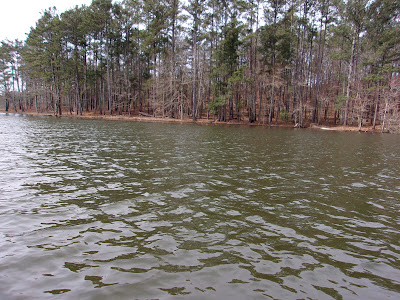 This is a beautiful lake in the early spring, but it turns nasty and in fact, downright ugly when the fertilizing starts. I only have 4 or 5 weeks to fish it before it turns slim green like pea soup. 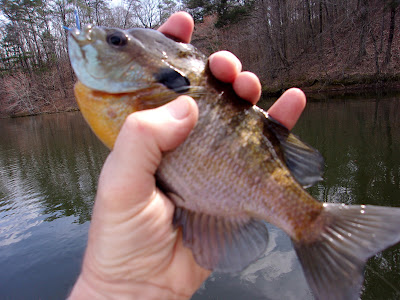 This was a colorful gill but it won’t make the cut for the quest. I landed numerous bluegills today but all were too small to count. I did bring home eight for a fish fry. The bluegill above produced four fillets. (A future post on how to get four fillets from a bluegill this size) Notice the rubber legs of the Bullet Boggle sticking out of its mouth. This was the only bluegill on top, all the rest were taken on the Black Gnat. Today was a good start for good things to come from this lake.
Posted by Bill Trussell at Friday, March 25, 2016

Well Bill, it looks like Spring might really be here and just in the nick of time. I was hankering for some nice bluegills. Thanks for keeping me involved.

A good start...sort of spring training.
I'm looking forward to your fillet post.

Howard
I think we have seen the last of winter here---Spring is my favorite time of the year. Thanks for the comment

Alan
Hope to land some nice size gills next week if the Spring weather stays with us here. thanks for the comment

Those are some decent fish there Bill, can't wait to see how you clean them. I rarely fish lakes and ponds where the algae is so thick that you have to clean the fly after every cast.

Mark
After the fertilize takes over on Walker, I still have Smith Lake, that will carry the quest through the last spawn, in August. I hope to make it this year. Thanks for the comment

Fisher
That bluegill and those Red Eye Bass really put up a fight on the 4 weight. I am waiting for the really big gills to show up at waters edge; hopefully this next week. I will video the segment on how to fillet a bluegill, and post it soon. Thanks for the comment

Nice to see some top water action on the cold water.

Ben
For sure my favorite type fishing with the fly rod. thanks for the commnet

Lester
Can be a tongue twister even without a few beers. thanks for the comment

Amazing what they will do even in cold water. Topwater, in that temp is awesome!!!

Well, I guess if I want a bluegill fish fry, I'm gonna have to visit you. Haha. Still on my bucket list, those bluegills! Maybe this summer. Good luck in your 2016 quest!

Looks like some nice spring fishing there, Bill. Good luck with the Quest this year!

Midwest
The fish felt like a block of ice, but they will be warming up this next week. Thanks for the comment

RD
Wouldn't be great if we could get together one day and make a trip---you never know???? thanks for the comment

Walt
I say this every year, but I think this may be the year I finally make it. thanks for the comment

Good!! Do it! And I will meet up with you and yours to fish wherever. I also have some great fishing here in Utah and you are welcome to stay with us anytime!

RD
We were out west last summer, who know we may be making another trip in the near future, and when do it will be by your place. thanks for the comment

What is your rubric on which bluegill makes the “BIG” cut? :-)
Which 4wt rod are you using?
Thank you for sharing!!!