Battling Gusting Winds on the Sipsey 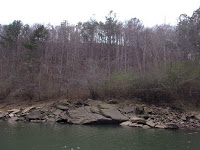 I have fished in windy conditions a number of times on the Sipsey but this past Wednesday had to be the worst. I met Jay at the Pump Station parking lot around . I have followed his blog “The Naturalist’s Angle” for a number of years. It was good to see him again and get to fish with someone who loves fly fishing as much as I do. The water level on the Sipsey has been up and down for the past months, and today we knew we would be fishing high water. In fact, we waited for a half-hour to get to fish at a suitable level. 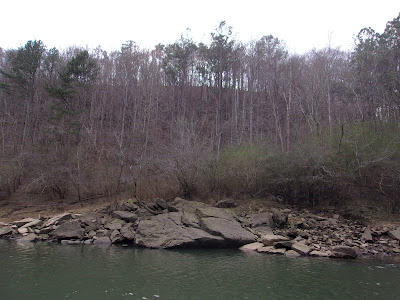 The wind was blowing so strong out of the south that it was difficult to get a good drift at times. We did see some limited midge action after lunch in some calm water closer to the banks that proved productive using smaller dries. 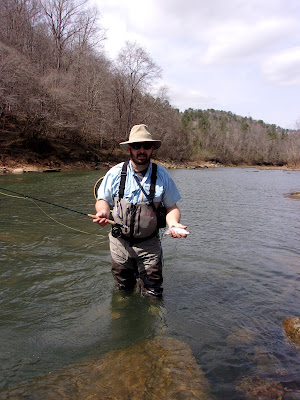 Jay landed the first rainbow dead drifting a size 18 beadhead midge pattern in somewhat calm water. All the trout taken today were in the stocker size, which was a lot of fun on our 3 weights. One can really diminish the excitement of landing smaller fish on the Sipsey if they are using anything above a 3 weight. Most of the trout caught here are 12” and under; one very seldom lands trout in the 15” range and above. 13” to 15” are considered special here. 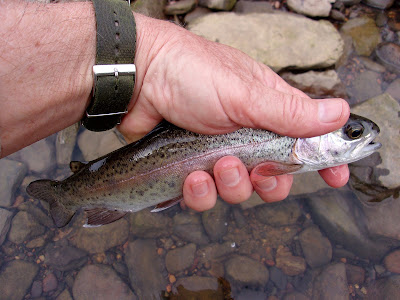 I started the topwater action midafternoon after seeing a small hatch in some calm water just off the opposite bank from me. This rainbow nailed the size 20 dry in fast action. We both lost numerous trout during the afternoon because of a slow hook set; these trout were fast!!! We continued to land trout on top right up to the horn sounding telling us it was time to leave. This was the first time Jay has had the opportunity to fish the Sipsey up close and have success. Do you think he might be coming back???
Posted by Bill Trussell at Monday, March 14, 2016

Bill, it looks like a great trip you guys had! Glad you were able to find a window of lower water conditions to fish even if the wind was bad.

Nice going guys.
Wind can so much of a pain but you handled it well.

Too funny, having a horn sound signal the end of the days fishing. Like being at a hockey game. An epic battle, with you and the wind that is. But, you "scored a few". It's a challenge trying to get a good drift during windy conditions isn't it?

I'd say Jay will be back.

This river sounds a lot like the Smith in VA. I loathe wind.

David
When fishing the Sipsey one has to take what is given, we were lucky we got to fish that long. thanks for the comment

Mark
He will not only be back to fish the Sipsey, but Smith as well. Thanks for the comment

Kevin
March is the windy month, July and August is some of the best times to fish the Sipsey. Thanks for the comment

Lester
We are up town here on the Sipsey, where else can you have a signal horn to tell you when its time to stop fishing? Thanks for the comment

Alan
The small hatch is all that save the day; dries were the winner. Thanks for the comment

What a great time with someone I admire so much. I think if you ask Jay what got him into blogging, he might mention me. We go back a lot of years together. I'm sure he'll be back eventually. Make him bring his better half and tell him I said hello.

Looks like you had a bunch of fun there on the river, Bill. With all that wind, I think I would have preferred a heavier line weight, say a 4 or a 5. Thanks for sharing your adventure!

Howard,
I think you can definitely take credit for getting me to start my own blog. Now if I can just get you guys to motivate me to revive it.

If I were him, I'd most certainly be making a trip back!!! Solid outing. Wind is a pain, but it can be dealt with, and you all handled it well!

Justin
For sure another learning experience for both of us. Thanks for the commnet

Jay
Looking forward to another trip soon. Thanks for the comment

Walt
A lot of fun for two determined fly fishermen. Thanks for the comment

Howard
We have fished with Kelly before and she beat both of us. Howard you may be the motivator to get Jay back into blogging. Thanks for the comment