This is the time of year I get to thinking of landing beautiful rainbow and browns on the Sipsey and Caney Fork. As stated in my last report it will be some time before that happens, because of high water on both tailraces. So all I have to satisfy the urge to cast to a live trout or bluegill are viewing some of the trips I made in 2015. This past year was my best on the Sipsey when it comes to landing quality rainbow. I think as each year passes I get more use to the tailrace and which patterns work at a particular time of the day and season. One of my best trips of 2015 was a trip where I felt I landed most all the quality trout I had lost the day before. I felt I really learned some things on this outing about position casting, patience, and how to really concentrate on the movement of the indicator, which in this case was a dry and a stick on indicator. 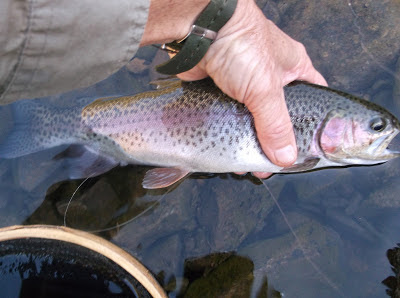 Back in early April of 2015 right before the spawn begin was one of my favorite trips going after some super size gills. The reason this trip really stands out in my mind was how hard I had to work to land some monster bluegills that were extremely wary of any boating activity anywhere near the super clear water where they were located. The numbers of huge bluegills I lost from break-offs in brush and not getting a solid hook set was another reminder of this outing. 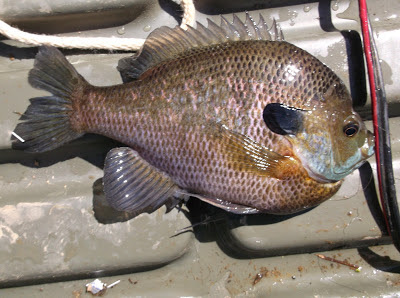 Bass fishing was somewhat limited for me in 2015, because I was so busy going after the big bluegill on Smith and the rainbow on the Sipsey. Of all the bass outings I had this past year one was really memorable because I was breaking in a new bass bug line and using some really big poppers to attract big spots on Smith. 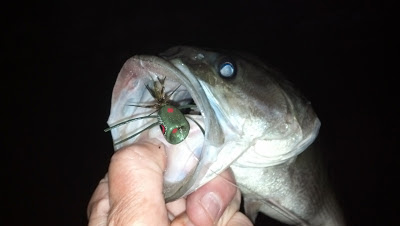 Well Bill, we're both learning in our "old" age aren't we? I too look forward to the seasonal progression of bugs, water and fish. I'll probably never get it figured out, but it sure is fun.

Sometimes the reason for the trip is not the destination but the journey. Impressive gill Bill.

Bill, your blog name and Timothy Kidder's posts have been stolen. Check out this link. fishingthroughlife.96. Make a complaint to Blogger.

Lester
Never to late to teach an old dog new tricks!! I learn something on trip I make, and yes that is what make it fun. thanks for the comment

thedeadfisher
I still think of that monster gill on my 4 wt. hopefully I can land some close to his size this year. Thanks for the comment

Bill, I just read and article in the Pointing Dog Journal. The author challenged the old dog/new tricks adage. He said that a dog can learn at any age. There's hope for us after all!

Howard
I've known for sometime that the name "Fishing Through Life" was being used by other bloggers. There is one guy out there with the same name selling art work of fishing and hunting images. I didn't see Timothy Kidder's post on Fishingthroughlife96 all I saw was images of fish. I think the guy selling art work is the only one with the same name. My blog pulls up at the top of the Google search when one types the name in. I have thought about changing the name of my blog but wonder if I would lose followers, especially those who don't comment on my blog??? Thanks for the heads up and the comment

Lester
Yes you and I and the rest of us baby boomers (I like to use that term because it seems to imply younger) still have hope!!!

Thanks for your reflections, Bill. I hope you have another greatly rewarding season beginning soon.

Bill, one of the aspects I truly enjoy most from your blog is your bluegill quest. You post some of the biggest gills I've ever seen. Here's a toast to a great 2016!

Walt
Can't to wait to kick off 2016 with some monster bluegills and I hope for a great trout season. Thanks for the comment

Howard
I am looking forward to another great year chasing the bluegills and going after more quality rainbow. Thanks for the comment

Bill, I'm always impressed with those big bluegill you catch! Hopefully you will find some more great trout this year as well. Thanks for sharing the look back on 2015!

David
Hopefully I can match the trout size with the bluegill this year. Thanks for the comment

A terrific season last....and a much better season to come.

Thanks Alan, I hope to accomplish my bluegill quest this season. Thanks for the comment

Bill, I am always envious of the huge bluegill you catch. You had a great season, and I hope 2016 is even better! Hopefully, you'll achieve your quest! If you change your blog name, I will surely follow.

Justin
I haven't made the quest yet, and this will be my 5th. time to try it. I hope the fifth time is the charmer. Thanks for the comment
P.S. I have reported two individuals who have taken my blog name, hopefully blogger will either remove their blog or if they don't then I may be changing the name of my blog.