Cathey and I Completing our "Out West Trip"

Cathey and I got back home late yesterday, tired but happy we made a trip of a lifetime for us. We traveled over 4000 miles saw some amazing scenery and didn’t wet a fly on the trip. Time was the factor that kept me out of the streams in the and . 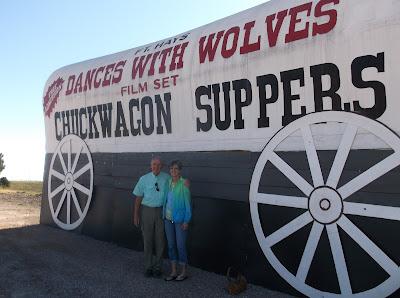 As some of you know I am a huge western fan and finding out we could see the actual props used in Dances with Wolves was a plus!!! 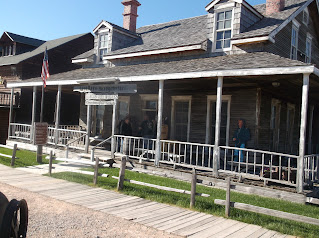 Bill, it was too warm to fish, so you didn't miss anything. It has snowed since.

Nice trip Bill. I would not hesitate to toss a fly into that lovely stream.
The 7th Calvary...now there is some history.

What a wonderful trip Bill. I'm glad you guys got out our way. Wish you could have visited Colorado as well. I took the same trip once many years ago minus Yellowstone. So much history and things to enjoy. Feel free to bore us some more. ;)

Been to Yellowstone once many years ago. I went through it so fast I even missed Old Faithful. I've been trying to get back for years. Soon.

Lester
The forecast was for light snow in West Yellowstone last week when we were in the park. Glad we left the day before. Thanks for the comment

Howard
We had plans to go into Colorado, but just ran out of time. Thanks for the comment

Mark
Be prepared to drive a lot to see each site, and also be prepared to see thousands of acres of burn terrain. Thanks for the comment

Alan
I saw numerous streams that you would have love to fish; I wish I would have had the time to fish some of them. Thanks for the comment

Bill - sounds like an amazing trip! The couple times I've been out west, I've been overwhelmed by the sheer scale of the landscape!

Mark
The rock landscape is unforgettable especially the formations at the Buffalo Dam area, entering Yellowstone. Thanks for the comment

Awesome trip Bill. This is one of the road trip ideas my wife and I are thinking about next year. Thx for sharing!

Drew
Hope you guys get to make the trip, it is worth every mile spent!! Thanks for the comment

Bill, I'm glad you got out to experience more of our magnificent western country. It's absolutely fascinating when you get off the usual tourist tracks. Thanks for sharing some great moments.

What a great trip!!! It's not all about fishing sometimes, and this post has shown me that you have some other hobbies and interests that are pretty cool. I am hoping to one day do a road trip like this, and I know wetting a line would be an issue, but I don't have a problem with that.

What was your favorite part of the trip, and your wifes?

Walt
We traveled off the interstate as much as possible to really see the beauty of the mountains in South Dakota, Wyoming and Montana. Every mile in those three states were amazing! Thanks for the comment

Pen
Believe me you won't be disappointed. Hope you get to make the trip soon. Thanks for the comment

Justin
I thought I would be disappointed not getting to fish, but the amazing scenery overshadowed my fishing urge.
The Custer Battlefield was one of the most interesting aspects of the trip. My wife and I spend the afternoon there, mainly because of all history associated with the place. I found out that Custer was not the arrogant, self centered, military officer perceived in the movies. If you ever have a chance to visit the battle field I highly recommend it.
The Black Hills in South Dakota were off the charts with its beauty and history of the Sioux.
I hope you and your wife get to make the trip one day. Thanks for the comment