A Reprieve from my Last Outing 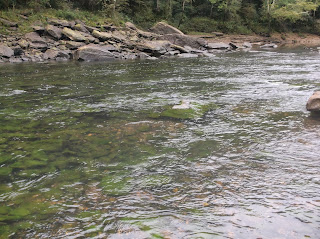 After trying to fish the slim cover waters of last week I wanted to fish some crystal clear waters this past Thursday. The Sipsey Tailrace was just the ticket, to rid me of the horror I experienced last week, while trying to bluegill fish on .
Fishermen always have a plan in place when venturing out on the water, and my plan today was to get on the water by mid afternoon and hopefully experience some type of hatch. In fact I was so confident of some sort of hatch; I didn’t even rig my fly rod until I actually got to the waters edge. As I approached the fast water at access four I notice a few midges here and there but nothing significant enough for me to tie on a dry. So I started with a soft hackle, because a few trout were feeding just below the surface. A soft hackle usually will generate a take if the drift is near perfection when the subsurface activity is happening. I stayed with the perfection drift soft hackle for a while with no results; so plan B was put into play, which was dead drifting a nymph. I hoped I could land some quality rainbow on the swing part of the drift. This same technique has produced some of my best rainbows this season on the tailrace. 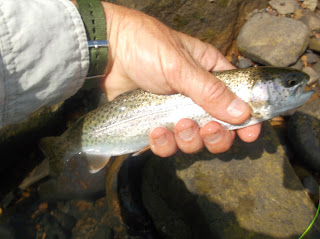 The dead drift yielded this rainbow on the swing. This technique places less emphasis on mending and more emphasis on feel. 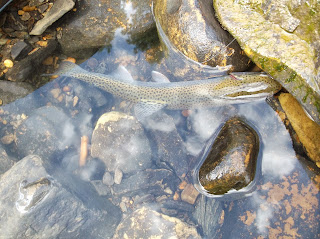 While viewing this rainbow, I imagined seeing these spots on the backs of future browns that may be stocked one day in the Sipsey.
The last rainbow of the afternoon was taken using a copper john dropped under an indicator. A few minutes after landing this trout the generators came on and cut short what looked to be an even more promising afternoon.