It is hard to believe that this past Wednesday in Jasper was a warm 72 degrees. This meant only one thing for Charles and me, which was wetting a fly on the upper section of the tailrace. Upon arrival we noticed a number of vehicles and one Power truck, so we knew we would have company. The guys with Power told us that the generators would not be running for the day; because of work they would be doing on the last installment of the metal steps they were completing.  With no worries of generators we headed to the first hole of the day. 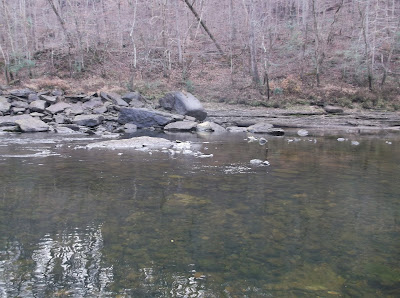 Charles waded across and fished an area down from a section I chose to fish above in some faster water. I had landed trout here before, but the task at hand was getting to the place. No one fishes this area, because one has to wade some distance over some very slippery moss covered rocks to get into position to even make the first cast. Once there you need to establish a good foot position, on the bottom of the stream to keep your balance in the fast current. I never wade now without a wading staff and it is an absolute must in places like this. The trout are always here because of the deep fast run that extends at least 75 feet. It’s difficult to fish here with an indicator, because of the rapid water causing the indicator to float up and under fast. I have always fished this run either swinging a nymph or dead drifting a nymph. I was using the soft hackle that Kevin at Feather Chucker tied for me a while back. He mailed some other patterns that I will give a try later on in the spring. The soft hackle beadhead really got my attention, so it got the first try in this fast water.  After a number of misses I got my first solid hit. I knew this was a good trout and not your average stocker, because I could feel the head shake and for a few seconds I thought I had the trout coming my way, but that wasn’t going to happen on this day. As I was trying to maneuver the trout out of the run it promptly snapped the 5x tippet and carried the soft hackle with it. Sorry to say this was the only soft hackle Kevin gave me in this pattern style. I tied on another nymph pattern and continued to cast through the run without another hit. As I left the run I knew I would be back here again to try to redeem myself, hopefully with another soft hackle Kevin might tie for me in the near future. 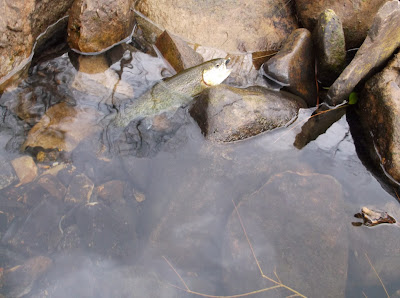 Landing this trout made me feel somewhat better after losing what I think was probably my best on the upper tailrace. I landed 3 other rainbow in this same area. Two went airborne trying to throw the tiny shrimp pattern, which just adds to the excitement of landing one of these rainbows. 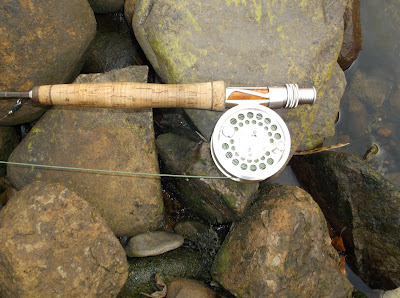 I seldom ever use anything but a 3 weight when fishing this section of the tailrace. I think using anything heavier would be overkill. The majority of trout landed here are all stocker fish, with the exception of a larger trout such as the one I lost today. The stocker trout in the 10” to 12” range can be a blast on a 3 wt.

Dang it! I'll have to send you some more. Glad to hear they worked on a tailrace. I thought maybe your trout would be a little too smart for the fly. I think it's the legs that make the fly effective.

For some reason when I tie flies, I always do it in 3's. Maybe Kevin can send 3?

I've got some of Kevin's flies and I'm anxious to try them. Now I'm worried that I may not have enough of them if they work. Nice post Bill.

Let me begin by saying that 72 degrees is just not fair, Bill. I am in the midst of a arctic blast in Northern Colorado. Now, kudos to you for some skillful wading and hooking into a really nice fish. Better to have hooked one like that than not hooking that big guy. Keep fishing those Soft Hackles, you won't regret it!

Nice outing Bill.
Those slippery rocks, they are a hazard for sure. Soft hackles are good flies and usually produce.

Kevin
Yes these trout are educated, because of the tremendous amount of flies that are thrown their way; but every once in while they see a pattern they haven't seen before and jump on it, which is the case with your soft hackle. Thanks for the comment and mailing it to me

Mark
I hoping to see a few more in the mail soon from Kevin. thanks for the comment

Howard
He sent me a couple of soft hackles flies but the one I lost was the one that really impressed me. I prefer the beadhead over the wet version. thanks for the comment

Mel
The legs are the attractor on most soft hackles and this one had great action. I will be back on that run soon, hopefully with another hackle. thanks for the comment

Alan
I would have surely fallen if not for the wading staff. It is difficult to get to the run, but once there it is worth the effort. thanks for the comment

Bill! Nice Fish! I am glad you were able to get out on the water and gotta admit very jealous cause it is an ice box in Northern Colorado so to think you have weather in the 70's just jealous!

Al
The 70 degree weather is gone, but it is still somewhat better than the deep freeze you guys are in out that way--stay safe--thanks for the comment

Pen
Moss covered rocks can create a fall quickly. thanks for the comment