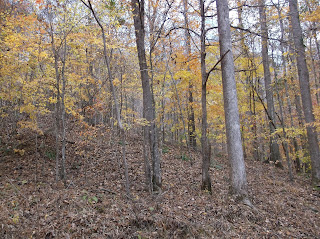 I knew today’s forecast was calling for wind slightly out of the north, but what I encounter on the tailrace today was boat sailing wind. I almost left when I saw how windy it was through the gorge leading up to the dam. I remembered making these windy trips here before. I did have the water pretty much to myself, because there was only one other vehicle in the parking lot when I arrived, so with that encouragement I stayed. Dries were out not only because of the wind, but leaves as well, so I tied on size 12 bead head Prince Nymph dead drifting some of the usual places I always fish at the mouth of the tailrace. I lost two trout within the first 10 minutes here, mainly due to show reaction by me. The short takes convinced me to change flies and go with a smaller nymph, and move on to another area above me. I have found that when the fish are finicky the smaller the pattern the better results. 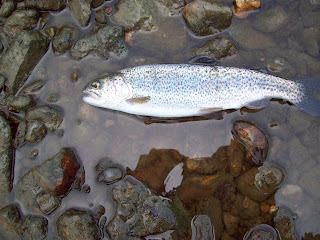 ﻿
﻿
This rainbow fell prey to a weighted size 16 bead head grey scud dead drifting the fly through some fast water, that I have learned to fish to my advantage. This would be the only trout taken for the morning on the nymph, numerous hits, but no results 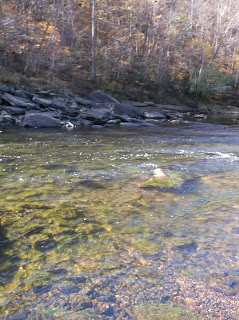 I really like this fast water dead drifting a bead head pattern. I never see anyone fishing this area, which is too my advantage. I lost 3 trout in here before I finally connected with the scud trout. I think I would have been a bit more successful if not for the tremendous wind I had to contend with here practically on every cast. 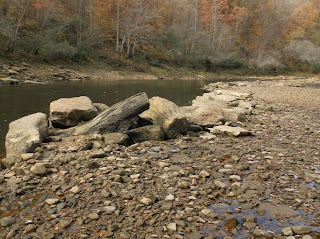 As I left the fast water I notice that there was some fairly calm water ahead of me on the west side of the tailrace which was sheltered by trees that lined the bank. The closer I got to the calm water the better it looked because I was noticing some surface action. This told me that there might be a possibility of landing a trout or two on top.  So I tied on the Bomber which is my go to dry fly when surface activity is present. 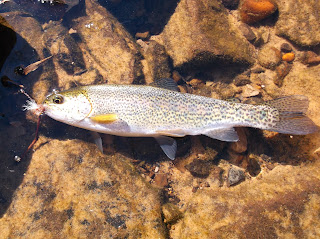 I was rewarded with this rainbow using Allen’s Bomber, Small Stream Reflections, on a long drift. I had to make some long cast to reach the surface trout on the other side of the tailrace; which would consist of numerous fail cast because of sudden wind burst whipping down the gorge.

I will admit that today was quite a challenge considering the weather. I forgot to mention the temperature was in the low forties today with a cold front approaching bringing temperatures in the low twenties for the coming weekend. 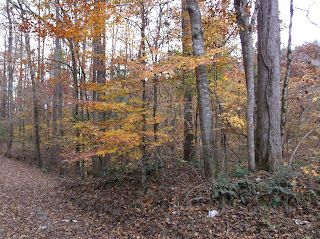 I've had some interesting days fly fishing in the wind. Good to see you stuck with it and had success.

Bill, I am going out for trout soon. you know that I really don't go for them. I'm gonna find out about Allen's Bomber I like weighted nymphs - for bluegills, lol. Seriously though, thanks for the post. I like good information like your post. Committed to the local club today.

I keep forgetting to mail out your flies. They should be in the mail tomorrow.

Wind can be a condition that's tough to overcome, but I see you did just that.
Thumbs up buddy.

The only time wind has been an advantage was in a float tube where you can use it to get that long cast. The rest of the time I bypass wind.

Bill
I guess this is where patience comes into play on those windy days. thanks for the comment

Josh
How close do you live to the White River? I have fished it some years ago and had success landing some nice browns. I can't wait for bluegill season in the spring. I have some new nymphs I want to try to see if I can land some nice one before they go on bed. I always like to use the nymph early in the season. Thanks for the comment

Kevin
I am looking forward to getting the flies, especially the soft hackle. I think I could have success with it on the tailrace. thanks for the comment

Alan
I am glad I didn't leave, because it give me chance to fish the Bomber in wind, and it came through. thanks for the comment

Mark
I will look at the weather a little closer next time before I go. thanks for the comment

Bill, good to see you challenging yourself with the fast water nymphing possible with the beadhead nymph. They are very effective. What type of Strike Indicator are you using? Thanks for sharing.

I give anyone credit for getting out even if conditions aren't ideal. Wind is a bugger to fish in.

Mel
I am not using any indicator, I am using this technique called Euro nymphing, which I learned from Mark at Fishing Small Streams---I am simply staying in contact with my line as the nymph drifts through the fast seams and narrow runs. You lose a number of fish but it is worth the effort even if you only land one. You might want to give it a try. Thanks for sharing

Howard
I had my persistence hat on Tuesday, and was determined to beat the odds--I was lucky to land anything that day. Thanks for sharing

Bill! Nice trout! The wind definitely can test the patience to say the least. I am glad you hung in there and was rewarded by some nice fish. Thanks for sharing the photos. The fall colors look amazing!

Al
The fall colors really sets this place apart in the fall. thanks for the comment

Awesome fish, bill!! Love that water you have!

Nick
It is the closet I can get to out west, and yes it is pretty special. Thanks for the comment

You did very nicely Bill!

Pen
Still a work in progress--thanks for the comment

Bill, pretty close to the White but not the Norfork portion. Beaver tailwaters are OK but not as good as I've had on the Norfork. Lots of big browns there.

Josh
If I was you I would have to give the White River a try come spring. thanks for the comment