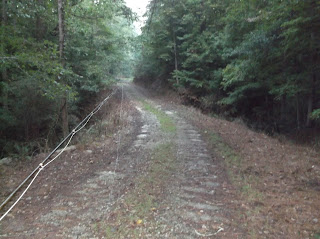 I made it out to the Sipsey Tailrace Friday morning a couple of hours earlier than last week. The start gave me a chance to miss the high humidity that one can’t escape if you live in the in September. I noticed immediately that there was no hatch at all, but that didn’t keep me from tying on the Bomber and letting it drip through a few runs. With only two hours to fish I knew that I couldn’t spend too much time with one pattern if it wasn’t producing. So with no takes on the dry, I left the run and went to the bank to try and come up with a game plan that would be productive for the time I had left. While sitting there enjoying the cool misty breeze coming off the water, I decided I would abandon the dries, nymphs and wet flies for the rest of the morning, and totally concentrate on the fast water up above me using nothing but the Seal Leech. I had used this pattern during the Trout Derby and had success with it in some slower water. So today would be its first test in the fast water above me. 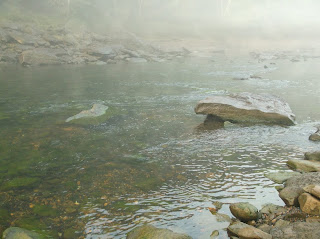 The water directly behind this boulder was less than a foot deep which became my position I used to cast up stream and let the Leech drift down and swing through the run in front of me. This run was fast but not anything like the water above me. So this run became my learning curve to get ready for the really fast water I knew I would encounter as I worked my way up this section. I really liked this water because of the deep pocket directly out in front of me. I had fish this area with a nymph and dry before without success so the Leech would get to test it today. First cast resulted in the Leech landing up and on the other side of the run. I stood here for at least 10 minutes working this one area. I was determined to give this water its due and at the same time work the area thoroughly with the Leech. 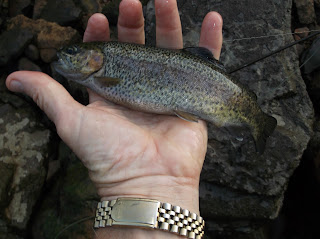 My patience paid off as I made an extremely long cast close to the far bank and then let the Leech slowly swing through the deep pocket. I knew I had a take when I saw my line go and as I set the hook this guy went airborne. He posed for the pic a few seconds and then he was gone to fight another day. 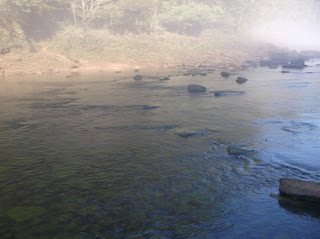 Great outing Bill. It will be interesting to find out if someone knows what the mystery fish is. We're finally getting some fall weather here in Maine which means cooler waters and colorful trout..now to just catch a few..

Nice going Bill. We all learn as we go, and there is always something new.
I can't recognize that small fish, but a streamer tied to represent it might produce a rainbow ofr two.

Pen
Certainly a mystery, the bigger rainbow in the tailrace could feed on those little guys. thanks for the comment

Nice to see you out catching trout Bill. I'm going to have to get some of those flies to try as soon as the streams are fishable again.

Howard
I have found swing casting in fast water really works well with this fly. I think you would be surprised at its results out that way. thanks for the comment

Awesome outing, Bill!!! I have no idea what that last fish is. Maybe some sort of smolt?

Bill, been a fan of the Seal Fur Leech for a long time. Very effective in the ponds and lakes I fish also. Really thankful for this post as it helps to see someone catching some fish when we are so surrounded with the mess of the floodwater.

Nice post. I have no idea what that last fish is. Some kind of sculpin?

I agree, it is a fantastic sport! Great job feeding the trout the leech.

Nick
Enjoyed the trip and have another one planned tomorrow. thanks for the comment

Mel
I have got to give this little fly a try come spring with the big bluegills. thanks for the comment

Kevin
Could be a tiny sculpin, really don't know what it could be--thanks for the comment

Bill, I think that's a darter there at the end of your post, probably a Blackbanded one.
http://www.outdooralabama.com/fishing/freshwater/fish/other/darters/blackbanded/